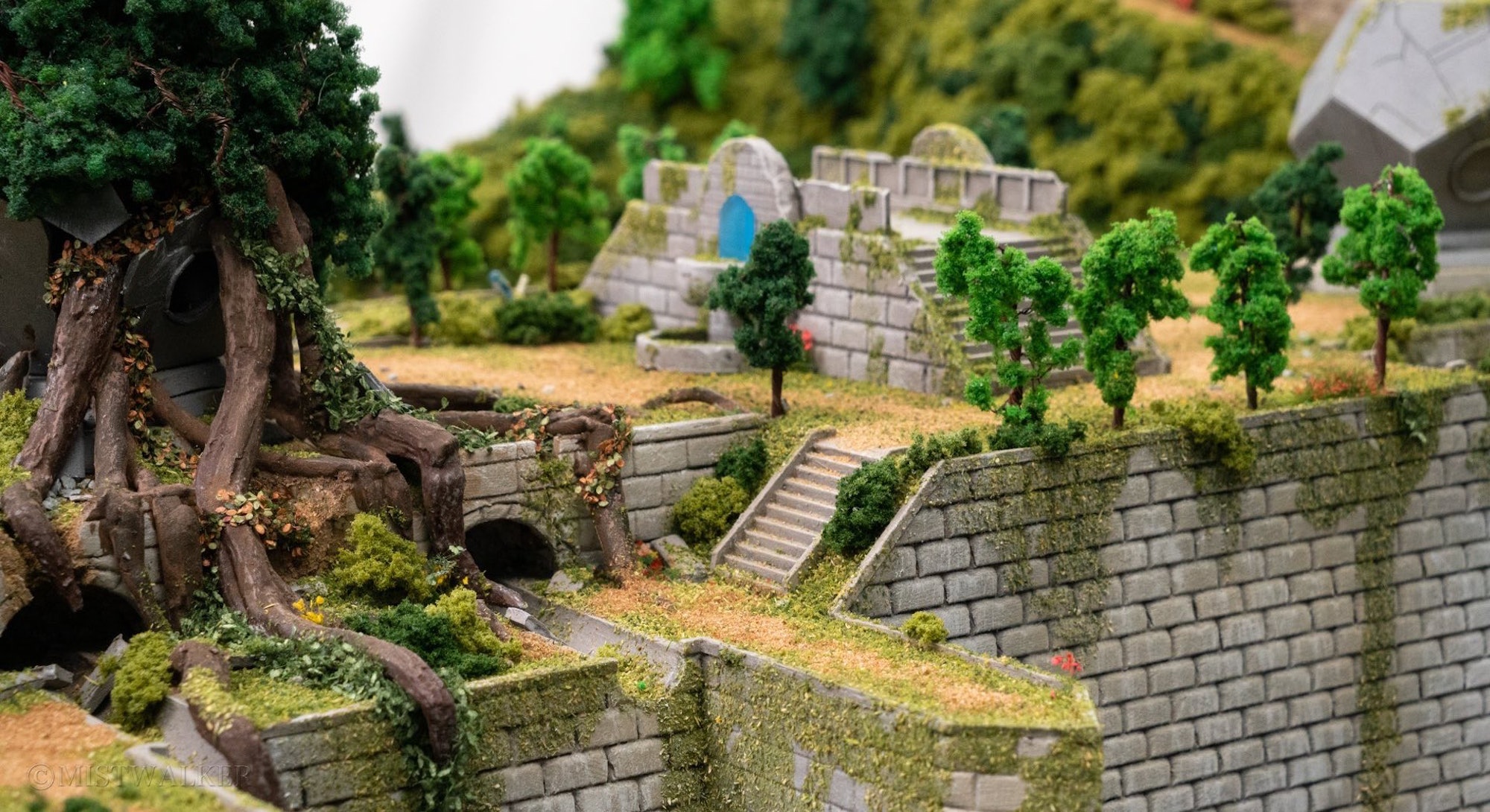 Apple Arcade gave Final Fantasy creator Hironobu Sakaguchi and his studio Mistwalker the chance to go back to basics with Fantasian, a turn-based RPG with digital backgrounds derived from intricate real-life dioramas.

Sakaguchi says Final Fantasy VI is one of the biggest influences on this new project. In fact, he got the idea to return to this style of turn-based RPG when he replayed FF6 on a livestream with some of its original developers a few years ago.

Fantasian also looks back fondly toward the RPGs of the PS1 era, with pre-rendered backgrounds that evoke the soaring scale of Final Fantasy VII and VIII. The result is one of the most beautiful mobile RPGs ever.

Sakaguchi says this unconventional approach to Fantasian’s environments was a natural decision. He played with model kits as a kid, and when he was at Mistwalker he decided to give the idea a trial run with the mobile RPG Terra Wars.

“We had used these dioramas, just on a much smaller scale,” Sakaguchi explains. “As I was looking at them, I thought to myself it’d be really cool if we could explore these dioramas in a fully fleshed-out RPG world. Naturally, that led to the pre-rendered style.”

The intricate and time-consuming process paid off in spades. Building an RPG starts with crafting the “scenario,” or story concept. From there, Mistwalker knew all of the locations it needed dioramas for and created blueprints.

“Being a diorama, you can’t really make changes later on,” Sakaguchi says. “I can’t tell the level designer that I want to add a path here to connect two areas. The level design process has to be very meticulous and intentional.”

Mistwalker worked with multiple studios on this project in a way that let them focus on each diorama maker’s strengths. For example, the Southern Forest was created by a team with experience making model train sets with trees, shrubbery, and mountains in the scenery.

The teams crafted these environments using their own materials, and the dioramas were 3D-scanned, allowing Mistwalker to implement the 3D models of these dioramas into Fantasian.

After photographing the dioramas from a myriad of angles, Mistwalker could then projection-map the images of the dioramas onto those 3D models, and that’s how the final product is made.

The process was consistent for every diorama, but some were more challenging than others.

“The Uzra was really a huge challenge, and the team that put that together actually really built it out,” Sakaguchi says. “The interior was actually modeled after a real ship. [The Frontier Town of En] was something we crafted early on, but as we were further along in development, a lot of the world setting and different elements changed, so we had to go back and recraft certain elements of that stage.”

Sakaguchi is particularly impressed by the Scrapyard: “They were able to build this world with all of these parts they’d gathered from model kits, and some items built from scratch,” he says. “This Scrapyard has a lot of disjointed pieces that they were able to construct into one single diorama.”

“I have a lot of emotional investment in all of them.”

These dioramas give Fantasian a wholly unique aesthetic unlike anything else currently on the market, while the complex environments, snappy turn-based combat, and engaging story bring it closer to classic Final Fantasy.

”What surprised me was how these companies built out the dioramas more than we had asked for, and I could really feel that they poured their blood, sweat, and tears into it,” Sakaguchi concludes. “I have a lot of emotional investment in all of them.”

While this aesthetic has its advantages, it isn’t all-encompassing. Sakaguchi decided against making stop-motion character models because he wanted to capture the minute facial expression of characters during conversations.

“There are a lot of different scenes [in Fantasian] where the characters are conversing and having little banter with each other,” Sakaguchi says, “and that’s true even with the pixel-art era of Final Fantasy. That subtle body language would have been really challenging to replicate using diorama characters or stop motion animation.”

The 3D models both the characters and dioramas will always exist digitally, but the real-life dioramas won’t last forever. “We actually gathered all the dioramas from different companies into that one diorama warehouse,” Sakaguchi says before delivering the bad news:

“If you try to move them too much or too many times, there’s a high likelihood that they’ll break or fall apart,” he says. ”Over time, the color will deteriorate, and certain dioramas, depending on the materials they use, will even melt.” The writing on the wall is obvious: These stunning works of art have a short shelf life.

“That’s the thing about using physical dioramas: they won’t last forever,” Sakaguchi says. “It’s sad for me to say, but at some point when they’ve deteriorated, we’re going to have to dispose of them somehow.”

The thought of these dioramas disappearing into a dumpster one day is heartbreaking. Still, there’s a certain solace in knowing that something beautiful won’t last forever. Using this unconventional technique, Mistwalker reinvigorated a classic style of RPG and gave Apple Arcade its first killer app.

Even after the dioramas have gone away, nothing can take that away from Fantasian.

Fantasian is available now via Apple Arcade for iOS, Mac, and Apple TV.