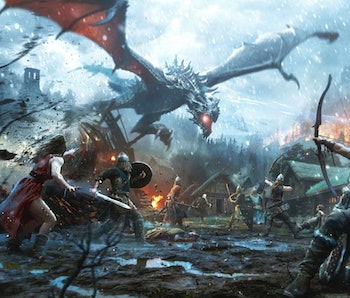 Video game developer Bethesda changed the scope of fantasy role-playing games with The Elder Scrolls V: Skyrim in 2011. A new Elders Scroll VI leak has seemingly revealed a release date timeframe and some gameplay details. If true, the experience might put players in the middle of massive battles that feel as large as anything we've seen in Lord of the Rings.

The information was posted anonymously to the Elder Scrolls Fandom site on April 24 and allegedly verified on Reddit, but there are some edits claiming the leaks are false. Redditor u/KingKRoolVsCiri claimed that the leaker, who is assumed to be a Bethesda contractor, showed them a copy of their NDA that he then showed to a site moderator to verify the post.

It’s said to take place in both High Rock and Hammerfell, which are the two neighboring regions to the west of Skyrim in Tamriel, the main continent where all of the Elder Scroll games take place.

The leak mentions “Q4 2024” as a release date timeframe for Elders Scroll VI, which means it’ll arrive by October 2024 at the earliest, assuming the post is accurate. That means there’s no hope that it’ll be a PlayStation 5 or Xbox Series X launch title, but the post described it as potentially the most cinematic and massive Elder Scroll game in the franchise's history. So it makes sense that it would be planned for next-gen consoles.

What can fans expect?

The Fandom post states that the game will be titled The Elder Scrolls VI: Redfall and that it’ll take place six years after Skyrim’s events. Players will be thrown into a period of regional unrest and take part in large-scale battles involving some of the biggest power-players in Tamriel. So think Skyrim, but instead of factions within a single region, players will be dealing with continental politics on a much wider scale.

The leaker states that Bethesda is waiting until the PS5 and Series X are a few years into their life cycle. The publisher wants to make the most use out of the consoles’ next-generation hardware to render sprawling environments and battles with potentially hundreds of warriors, archers, and mages on screen at once.

“Most of these regions will be warring against each other,” wrote the anonymous leaker. “This is because Bethesda wants to use this generation’s hardware to create some huge, epic battle scenes with dozens, if not hundreds of characters battling on-screen in real-time.”

Specifically, they mentioned an enormous clash that will take place when the Orsimer (orc race) raid a city in High Rock named Jehanna. This battle is said to be “siege on Whiterun from Skyrim times 10,” which was one of the culminating quests in the Elder Scrolls V.

The leaker said Bethesda will also focus on giving players who are obsessed with finishing every side quest a variety of fun easter eggs and details. They described one mission where the player is asked to babysit a group of Khajiit (feline race) children. So they’ll basically be catsitting a litter of kittens.

If this is all true, it seems like Bethesda is trying to strike a balance between a game of massive proportions and filling it with the rich lore and fans of the series have obsessed over for years. But does all of this add up?

The Inverse Analysis — So far, these are the most believable Elder Scrolls 6 leaks we’ve received to date, and even if their accuracy is called into question, everything that's presented here — from the release date to the scope — seems possible. While the gameplay details that the leaker mentioned are impossible to fact-check, the alleged release date makes a lot of sense based on the continuing popularity of Skyrim.

As of mid-2018, Bethesda reported that “millions of people” are still playing Skyrim every month. That suggests that the company is in no big rush to put out another installment of the series if fans are still enamored with a game from 2011. Instead, they’d rather take their time and flesh out a sequel that will do Skyrim justice.

The company has recently faltered with the launch of Fallout 76, which was an online follow-up to its post-apocalyptic RPG series and a unanimous flop. It’s reassuring that the company is seemingly sticking with a single-player focus and taking its time to make sure a next installment to what can be considered its most successful RPG of all time is as polished and epic as possible.