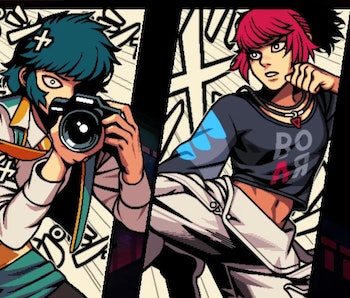 Part Shin Megami Tensei, part turn-based tactics game, Demonschool is one of the most inventive games in a long time. After spending some time with it at PAX West 2022, my excitement for Demonschool shot through the roof thanks to its spooky tone, beautiful art, and unique spin on its tactics gameplay. From developer Necrosoft Games, this adventure puts you in the shoes of college students tasked with hunting down demons from other realms. Demonschool simultaneously capitalizes on the sim aspects of games like Persona and SMT while standing on its own with combat that evokes Into the Breach in some ways.

While Demonschool still needs a bit more work before release, it’s already one of 2023’s most exciting upcoming games.

A new spin on tactics gameplay

Demonschool incorporates many familiar gameplay mechanics such as relationship sim systems and you also have to plan how to spend your time each calendar day. But the unique spin on combat is where it truly shines. Demonschool breaks many rules that fans of the tactical RPG subgenre might be familiar with.

Each party member has different movement capabilities, leaving the game wide open in terms of strategies. You have eight moves to work with during your turn, and your party members can initiate combos with their allies. For instance, you can use Namako to dash through an opponent to debuff them, and then follow it up with an attack from Faye to deal a ridiculous amount of damage.

Your party members all have special moves, too, and some have particular conditions that — when met — will negate the use of action points, as well. So, if you know what you’re doing, you can absolutely decimate your enemies in just a couple of turns.

Another intriguing mechanic is the ability to sidestep into a movement path. Sidestepping doesn’t take up an action point, so it’s always in your best interest to utilize this particular feature to make the most out of your attacks. Characters can also attack diagonally, giving you more freedom when taking on the evil demons across each battle.

Simply watching combat unfold is a delight. Once you’ve decided on all your moves, a simple button press triggers the immensely satisfying series of actions back-to-back. Most turn-based tactics games depict each move individually, but seeing everything play out all at once gives everything a cinematic feeling despite the fact that we’re talking about grid-based combat with an isometric camera angle.

There are also large-scale boss encounters that incorporate many of the strategies from the regular battles. These sections serve as skill checks that require you to utilize many of the tactics you’ve learned thus far. These are more rewarding thanks to the way the game plays with scale. Your 2D characters battle 3D demons, which sort of gives everything a cosmic scope that’s hard to match.

Much like the Persona games, you’ll have a much smoother ride if you level up your relationships with friends. And, in fact, building relationships between interesting characters in a unique world might be the big draw for many gamers here.

A day in the life

In between battles, you have to choose how to spend each in-game day, just like Persona or Fire Emblem: Three Houses. During these sections, you’re free to explore various parts of the city like the school itself, a dock area, the graveyard, and many others. Here, you’ll come across NPCs that offer sidequests, which don’t advance time. Some of these quests are straightforward and simply require you to talk to other characters, while others send you into battle. The only way to advance time is to follow the main quests, but the game encourages you to partake in optional objectives first.

You can also spend time with other party members. Doing so will make your combos more powerful during combat. Creative Director Brandon Sheffield tells Inverse there are 15 party members, offering a tremendous amount of variety, not just during combat, but in terms of the kind of interpersonal relationships — romantic or otherwise — that you’re able to build.

Sheffield says the relationships you build with party members impact the game’s endings, giving you plenty of reasons to play through multiple times. Demonschool will take around 20 to 25 hours to complete, making it far more digestible than other Persona or SMT games.

It’s clear Necrosoft is taking the most beloved aspects of its inspirations, offering a more streamlined and refined experience that still has plenty of individuality.

More like this
Gaming
Sep. 14, 2022
Bayonetta 3 is far more ambitious than you expected
By Joseph Yaden
Gaming
Sep. 14, 2022
Incredible combat makes up for a sparse story in Valkyrie Elysium
By Robin Bea
Gaming
Sep. 20, 2022
Harvestella rises above an overgrown field of farming sims
By Willa Rowe
Related Tags
Share: