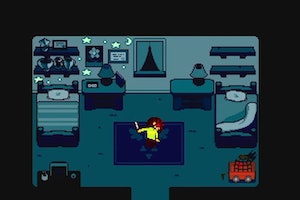 critical details to pore over

Deltarune Chapter 2 was officially revealed during a livestream on Wednesday, and is set to release on September 17. Series creator Toby Fox revealed the imminent launch by showing off about 10 minutes of lore-drenched gameplay footage from the start of the upcoming Undertale-infused adventure. Here are six things we learned about the next chapter of Deltarune.

Be warned: Undertale and Deltarune Chapter 1 spoilers ahead!

6. The pie theorists were right

The internet was set aflame at the end of Deltarune Chapter 1 when Kris brandished a knife after his heart-shaped soul fluttered into the birdcage in his room.

Could it be possible that the character we’re playing as has been the villain this entire time? What kind of nefarious plan might Kris have for that knife, and is Toriel in danger?

Apparently not, as it’s been confirmed that, after his time in the Dark World, Kris simply went on a massive snacking binge and devoured the entirety of his mother’s homemade pie, prompting her to lock the kitchen door.

Chapter 1 closed on a cliffhanger of epic proportions, but it appears to have been a diversion...for now.

5. Noelle will play a bigger role

Just as Suzie and Kris are about to re-enter the door the Dark World, they’re approached by their classmate Noelle, a raindeer girl who visits her father in the hospital during the open-ended exploration section that concludes Chapter 1.

Now that she’s asking our two protagonists if they’d like to work on their school project together, it seems like Noelle could play a bigger role in the story going forward.

As this years-old theory from Koya-Sato points out, the first chapter seems to deliberately position Noelle as a character who’s particularly likable, given her kindness toward others and her devotion to her ill dad. We wouldn’t be surprised if Noelle becomes a playable character sometime during Chapter 2 or beyond.

4. Noelle has a crush

While we’re not quite sure who Noelle’s object of affection might be, it’s no secret that her dialogue with Kris and Suzie is full of nervous, romantic energy.

We’re slightly more inclined to think Suzie is the target of Noelle’s emotions given that she specifically asks the dragon-like monster to join her before forgetting to invite her human friend as well. Plus, it’d be rather sweet for someone as demure as Noelle to have a crush on the class bully. What could be more perfect?

Suzie and Kris shrug off Noelle’s invitation before swiftly returning to the task at hand. Those two don’t seem interested in anything but the Dark World for the time being.

3. The internet is out, for some reason

During the school scene, Alphys mentions that Kris can't talk to their brother Asriel because the internet still hasn’t been fixed. It must have happened recently too, because her dialogue suggests it’s out of the ordinary. Alphys also expresses worry about “returning to her primal form” without connection to the outside world.

We’d be inclined to guess this lack of network activity will have significant lore implications going forward — there has to be a major reason why the entire internet infrastructure of the world has somehow gone down. The answer to that question could be part of the central story of the rest of the game.

It might also lend some credence to theories that Deltarune could be a prequel to Undertale, when monsters live underground in what could be described as a more “primal” state. Alphys still shows her smarts in her scientific research, of course, but the rest of the world around her is far less developed.

2. Suzie wants to go back

Suzie can’t wait to talk to Kris about the events of the previous day and the friends they made in the Dark World, like Ralsei and Lancer. As soon as class ends and Kris awakes from their slumber, Suzie accosts her friend and gets ready to head back inside. Despite making fun of Ralsei and Lancer throughout most of Chapter 1, Suzie is very much leading the charge to go back.

1. Undertale seems to exist within Deltarune

At the start of the footage, Kris approaches Asriel’s computer and sees files for a game that features a “giant boss with rainbow wings.” Kris remarks that the game never saw the light of day. This could be a callback to the final boss of the Undertale pacifist run: a winged, demonic version of Asriel Dreemur.

In true Toby Fox fashion, there’s clearly some very meta shenanigans going on here, but we’re not sure what to make of it. Did Undertale really happen, or are we just playing the finished version of Asriel’s creation? There’s a lot to be considered in this case, so we’ll just let the fans debate.

Deltarune Chapter 2 comes to Mac and PC on September 17.