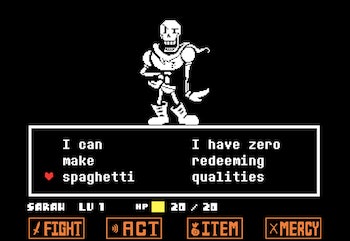 Everyone has opinions on indie games. What they like, what they don’t like, how much they should cost, how many fishing mini-games should be involved, and so on. Perhaps the only thing in greater abundance than indie takes are the games themselves. In 2020 alone, Steam saw nearly 10,000 indie titles released on the platform. So many titles across so many genres, yet virtually all of them have one thing in common (no, not fishing). They all have a debt in some way, shape, or form to one single indie title that forever changed the landscape of indie gaming.

That massively influential title is currently free to play on Xbox Game Pass.

Let’s talk about Undertale. Why exactly is it so influential? And why should gamers dive in on Game Pass even though the game is nearly six years old? It helps to begin at the beginning. Undertale began its life as a Kickstarter project with humble goals. Creator Toby Fox wanted to raise $5,000 for his project, deemed by many to be a spiritual successor to the SNES classic Earthbound. Many games had gone the Kickstarter route before, but Undertale’s massive commercial success (more than 3M copies sold) helped highlight crowdsourced funding as a viable path for indie developers.

Fox raised $50,000 by the time the project ended, enough to add a host of features to the game, but the magic of Undertale is its core concept — pacifism. Unlike 99.9 percent of games out there, it’s actually possible to finish Undertale without killing a single enemy. In fact, the multiple endings for the game largely hinge upon the violence in your playthrough.

The similarity to Earthbound is intentional. Both feature the story of a boy pulled into a strange and magical world he had no clue existed right under his nose, and both have a lot of heart. Undertale looks like many other retro pixel RPGs. But like the world it's set in, there’s a lot going on underneath the surface. Players fell in love with characters like Papyrus and Toriel because of fantastic writing supported by a soundtrack widely considered to be one of the best of all time. The dialogue and story are top-tier. Fox seems to have considered every single thing the player could try to do, and has a response to it. Along the way, it makes you actually care about your decisions by combining these elements in a way no other game has ever done.

The combat is not your typical cookie-cutter turn-based action, either. You’ll notice right away the “Mercy” feature that gives you the option of sparing enemies, but make no mistake. There is some good action in this game as well, with a unique mix of turn-based, live-action, and bullet hell components. There are also plenty of different puzzles to solve, adding a cerebral element to the gameplay beyond tugging at your heartstrings.

What makes Undertale special is how openly it subverts our expectations for what a game is. There is no fourth wall, things like saving and leveling up are openly talked about by characters as part of their world. By questioning the violence inherent in virtually every game, Undertale found success by making us all think a little bit more about what we do for “fun.” It made a ton of money in the process, and inspired a whole generation of indie developers to aim high and follow their hearts.

Follow yours to Xbox Game Pass and jump into Undertale ASAP — and don’t trust Flowey when you get there.

More like this
Gaming
Jan. 25, 2023
5 years ago, the most heartfelt indie platformer changed video games forever
By Willa Rowe
Gaming
Jan. 18, 2023
A Space for the Unbound is 2023's first great indie game
By George Yang
Gaming
Jan. 29, 2023
You need to play the most hardcore sci-fi platformer ASAP
By David Grossman
LEARN SOMETHING NEW EVERY DAY.
Related Tags
Share: