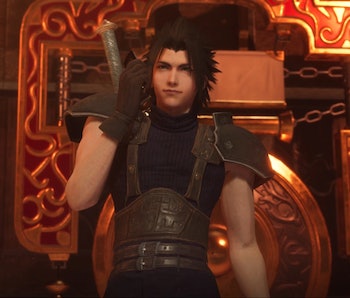 Crisis Core acts as a prequel to the entire anthology of Final Fantasy VII, taking place seven years before the events of the original game. While many of the game’s elements are the same, Crisis Core Reunion is actually quite a different experience from FF7. Because the original game was released on PSP, it’s a bit more compact of an experience, and there’s no new content added for the Reunion version. If you’re hoping Crisis Core Reunion will tide you over until Final Fantasy 7 Rebirth, here’s exactly how long you can expect it to take.

Who would you rather date: Cloud or Zack? Let us know!

How long does it take to beat Crisis Core -Final Fantasy 7- Reunion?

Crisis Core will likely take players roughly 14-17 hours the first time through, and that’s mostly if you’re looking to simply mainline the story. Crisis Core obviously isn’t as long as your typical Final Fantasy game, but there’s still a wide array of side content to dive into as well. Between major story “missions” you’ll get the chance to run around and explore Midgar, which is where you can talk to a lot of NPCs, take on side missions, and more.

Apart from that, Crisis Core’s side content is grouped into small bite-sized missions that you can take on from save points. There are literally over one hundred missions in the game, and some have extra story content while others are used mainly for unlocking new Materia and equipment.

Completing these missions can easily double your playtime, as your own 100 percent playthrough clocked in at roughly 35 hours. The combat changes in Crisis Core Reunion and faster loading mean that a full playthrough doesn’t take nearly as much time as the original PSP version.

How many chapters are in Crisis Core Reunion?

Crisis Core Reunion is split into eleven different chapters, each of which can typically be completed in a couple of hours or less. Although we won’t get into specifics it’s also important to note that there’s a bit of a time skip in the story after Chapter 5. Here’s a full list of Crisis Core Reunion’s chapters.

Is there a post-game and New Game Plus?

Crisis Core Reunion doesn’t have any new content for the post-game, however, you will unlock the New Game Plus option after you roll the credits for the first time. In New Game Plus you’re able to carry over character level, Materia, equipment, items, money, and character memory progress for the DMW.

Keep in mind, however, that the game only has Normal and Hard difficulty, which can be selected on the first playthrough, so you won’t necessarily have a bigger challenge. You can also reload your save from before the final boss battle and use that to mop up any mission you might have missed.