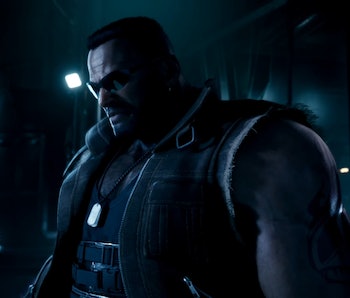 Final Fantasy 7 Remake pays homage to the original PlayStation version. Its story stays mostly the same, but additional sidequests and specters point at intentional differences that might amount to something greater in Final Fantasy 7 Remake: Part 2. Whispers, or “arbiters of fate,” appear at key moments in the story to foreshadow changes from the original. One of these moments is a twist with Barret that left fans feeling cheated, though it could be for more than just the shock value.

Spoilers ahead for Final Fantasy 7 Remake.

Barrett finds himself cornered during a confrontation with President Shinra and just as the company president is about to shoot him, Sephiroth stabs him through the chest (like he did with poor Mario). Then, he does the same with Barret. Tifa, Aerith, and Cloud react in horror as Avalanche’s leader falls to the ground and the Whispers surround him.

Who would you rather date: Cloud or Zack from Final Fantasy VII? Let us know!

Longtime fans will know that this wasn’t in the script. However, there wasn’t much consequence to it, considering how Barret quickly healed, and it wasn’t brought up again. It’s a strange choice, considering how much the first Final Fantasy 7 emphasized the finality of death. However, one fan pointed out a reason that could explain why Square decided to add it.

Redditor Xekir brings up popular theories that brush off Barret’s “Disney death” as a way “to show the power of Whispers/fate,” “to foreshadow future events,” and “to shock OG fans.” Then, they point out that it could be an “excuse” why Barret isn't in the Jenova boss fight. Xekir admits that the other theories still probably contributed to the decision, but that the reason for the twist with Barret could have more weight than fans originally imagined.

“There is no party change system in the game outside of the battle simulator and stuff. Even when you use the PHS terminals, you aren't changing party members, just switching from one set group to the other,” Xekir explains. “Even when you have all four controllable party members together in the Shinra Building, you don't get to choose. They come up with excuses like Red and Barret not fighting because they're lifting rubble to clear the path.”

In Final Fantasy 7, you have the choice of swapping party members into battle. However, Final Fantasy 7 Remake created situations where only three characters were available at any given time, so there was no need for players to swap between them.

Xekir pointed out that only two combat encounters existed where players theoretically had access to all four party members, not counting the final boss: the boss fight where Barret and Red are busy lifting rubble and the Jenova boss fight.

“I think it's fairly likely at some point in development they decided ‘we need to explain why one party member isn't in this fight’ and ultimately came up with the Barret getting stabbed thing,” they concluded. This theory might have some footing in reality, but it’d be difficult to keep up in later installments considering the other characters fated to join Cloud’s party. If the remake follows the same trend as the OG Final Fantasy 7, that is.

In the end, commenters focused more on how “cheap” the incident felt because of how it removed consequences from death. Those who played the original game should further know how important that is. We’ll have to see how permanent death really is the Final Fantasy 7 Remake sequels.

More like this
Gaming
Feb. 1, 2023
The Best Video Game Ever Made Just Got Its Own Holiday
By Hayes Madsen
Gaming
Jan. 27, 2023
Dirge of Cerberus is still the most incoherent Final Fantasy game ever
By Willa Rowe
Gaming
Jan. 31, 2023
8 Years Later, Square Enix's Supernatural Teen Drama Remains Timeless
By Willa Rowe
LEARN SOMETHING NEW EVERY DAY.
Related Tags
Share: