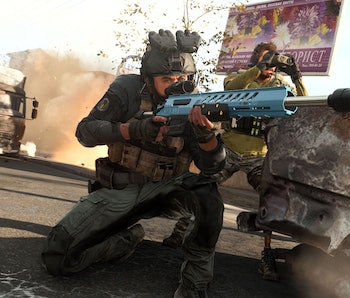 On June 29, the official Call of Duty Twitter account published a tweet that spelled out "200" in small icons of a person attached to a parachute. "We're gonna need a bigger plane," the caption reads.

200-Player Battle Royale — The biggest game-changer with this update is the 200 player battle royale mode, which will make this game have the largest matches on the battle royale market. The mode is being touted as a "limited-time mode" in some promotional images (like the one above), but the blog post does not specify how long 200-player matches will be available for in Warzone. The 200-player mode for Call of Duty: Warzone was rumored before the game was even announced, but it has been absent from the wildly popular battle royale game until now.

Hopefully, it will stick around if the mode is successful and it doesn't put too much stress on Activision's servers. One other addition that should spice things up with larger player counts are Supply Run Contracts, which reward players with a discount if they reach a specified Buy Station within a time limit, this should be much tougher to do with 200 players on a map.

New Modes — While 200-player matches are the major new draw, two other new modes also come with this update: First up is Juggernaut Royale, which will see players fighting for the classic powerful armor.

"Find one of the airdropped care packages to become the Juggernaut and use the mini-gun to attack enemies and vehicles," the official description explains. "Once a Juggernaut is sent to the Gulag, a new Juggernaut care package will drop on the map, so do your best to capture the suit and take on any squad that stands in your way."

Those of you playing Call of Duty: Modern Warfare will also find a new mode called Team Defender. This returning classic mode has teams trying to rack up as many points as possible by holding a flag spawned somewhere on the map.

New Map, Weapons, and Skins — As with any Call of Duty update, Season 4 Reloaded comes with new weapons, maps, and more. The Spotter Scope can now be found on Verdansk and used to mark enemies around the map. A new sniper rifle called the Rytec AMR has also been introduced and should pair well with that new scope. The Cheshire Park map has also been added to Modern Warfare in addition to a new Operater named Roze and a variety of new content bundles to buy.

What is the Call of Duty Season 4 Reloaded update release time and file size?

This update isn't that far away!

Call of Duty: Warzone is available now for PC, PS4, and Xbox One.