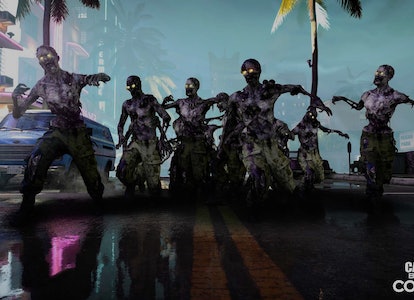 Call of Duty: Black Ops Cold War consistently gets exciting new updates, with a new era slated to begin with Season 2 beginning on February 25, 2021. While that update will mainly focus on Black Ops Cold War's multiplayer as well as the free-to-play battle royale Warzone, a new leak reveals that a major Zombies update is also in the works.

The large-scale Zombies mode could has been rumored for a while and seems to now be a reality. Activision has leaked the upcoming Zombies mode themselves! While we won't have to wait too long to hear more about it, this is everything we know about the new Black Ops Cold War Zombie mode right now.

How did Call of Duty Outbreak leak?

A teaser for this new Outbreak mode appeared on the official Call of Duty website and mobile app on Thursday, according to PC Gamer. "Welcome to Outbreak - a new, large-scale Zombies experience," the tagline reads. While its listing encouraged readers to press a button and watch a reveal trailer, that link did not take users anywhere.

The message was reportedly taken down by Activision within 30 minutes, but perhaps thousands of Call of Duty fans saw it, shared it, and spread the word. The fact that this leaked in such a fashion indicated that a major reveal would happen very soon. Recall that a somewhat similar leak occurred in March 2020, spoiling a big Warzone reveal mere days before the launch. Sure enough, a bigger reveal did happen mere hours later when Activision shared more information about Season 2 over its social channels, including "a massive, all-new Zombies experience."

When is the Call of Duty Outbreak release date?

While we didn't know the release date when the information was initially leaked, Activision released a new trailer and a Season 2 roadmap as part of an extensive blog post on February 18. It confirms that the game mode will launch with Season 2 starting February 25 with a special Challenge Event running from then until March 11. It does seem like the new mode will be a permanent addition to Black Ops Cold War, however.

What is Call of Duty Outbreak?

"The next chapter of the Dark Aether story takes the agents of Requiem deep into the heart of Russia, where they’ll fight to survive their greatest challenges yet," the official blog post reads. "Welcome to Outbreak: an entirely new, large-scale Zombies experience unlike any other! ... it’s up to you and three fellow agents to complete the deadly experiments that few have survived."

Similar to the traditional Zombies mode, Outbreak is a co-op experience for up to four players, except rather than a more confined and streamlined experience, the layout more closely resembles Call of Duty: Warzone with open-world maps.

Continuing the Dark Aether story, Outbreak takes place across massive play spaces throughout the Ural Mountains, packed with new enemies, team objectives, player rewards, and intel to discover on foot, in vehicles, or by jump pads. Whether its hunting down elite enemies using a satellite tracker, escorting a Rover that detects dimensional portals, or holding out against zombies in a confined Dark Aether zone, agents of Requiem will need to complete these investigations before they can Exfil … or risk entering a Dark Aether portal to a new region for even more rewards.

In the trailer, players drive vehicles to try and reach a specific analyzer to complete an experiment. In another sequence, they have to get a rover to a breach point. All things considered, it looks like

What did the other Call of Duty Outbreak rumors say?

While Activision has now officially leaked the Outbreak mode, the game mode has been rumored and teased for some time. On February 9, reliable insider Okami discussed the mode on Twitter. "There's a new mode called Outbreak coming soon," they explained. "Don't know all the details but it's supposed to be Treyarch style, co-op zombies on a large-scale Fireteam map. I've heard it described as 'open-world zombies,' so take that for what you will."

They also said in a reply that the mode will be co-op only and not competitive like Warzone or Black Ops Cold War's multiplayer. On February 16, Treyarch also cryptically tweeted "Breach scale: Large. Status: 0% contained," alongside a GIF that seems to tease something new for Zombies.

With Outbreak's subsequent leak, it's very likely that this tweet was an early tease for the new mode. A reveal is likely imminent, and Inverse will keep you in the loop once the mode is announced.