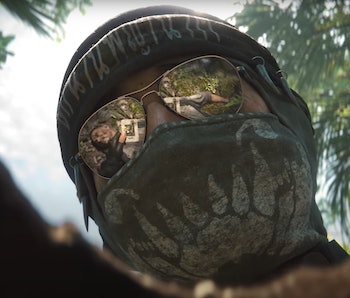 Verdansk is about to become another warzone.

After a year of teases including a "nuke" event that never happened, is Season 2 of Call of Duty: Black Ops Cold War bringing the long-awaited change to Warzone fans want?

What Happened? — On February 16, Activision released the Season 2 trailer for Call of Duty: Black Ops Cold War. Set in a jungle in Laos, the video comes packed with all the new weaponry and gear that players will gain access to in Season 2. That includes new scorestreaks (the Hand Cannon and the Minigun), and three new Operator characters — Wolf, Rivas, and the masked Naga — to play in multiplayer and Warzone.

But it's what the new masked villain Naga says to Season 1 villain Stitch via radio that teases the biggest change for Warzone. When a soldier fails to assassinate Naga, they radio Stitch to tell him "the rats are here" and that "Adler's secured and headed to you in Verdansk."

"Good," Stitch is heard saying. "Make them believe we care about the Nova 6 supply lines."

"Adler's secured" — The Season 2 trailer for Black Ops Cold War continues the story that began in Season 1. In the Season 1 trailer, Adler was baited by his old nemesis, Stitch, to a mall in New Jersey. There, Adler and his team learned Stitch was making new Nova 6 gas (the same gas that appears in Warzone) only to be surrounded and overwhelmed by Stitch and his forces.

In the outro cinematic released last week, Adler was captured by Stitch. Now, in Season 2, it is revealed Adler was taken to Laos to bait Adler's people but was transported back in secret to Stitch, who is in Verdansk. Meanwhile, Naga will keep Adler's people busy to waste time.

It's an elaborate story on the part of Treyarch and Raven Software, to create lore for the multiplayer modes. It's this lore that fans often poke through to predict and speculate on new in-game content. (Hence, the months-long speculation over a nuclear event with the arrival of nuclear bunkers and inactive nuclear missiles scattered around Verdansk.)

This is why what Naga tells Stitch is so interesting.

In the trailer, Naga makes an explicit reference to Verdansk, where Stitch and Adler are present in the Black Ops Cold War timeline. (And Verdansk, of course, is the location where Warzone battles take place.) Warzone technically takes place in the present day just after the events presented in 2019's Call of Duty: Modern Warfare, but that doesn't prevent players from using Black Ops skins and guns in Warzone. That's why this story teased in the Season 2 trailer could still bring forth changes for all players in Warzone.

Welcome to the Jungle — Meanwhile, fans in the Reddit subreddit r/CODWarzone think the Season 2 trailer teases a jungle expansion to Warzone. While it's impossible for an eastern European city like Verdansk to have a tropical jungle, Season 1 of Black Ops Cold War did introduce the smaller-scale "Rebirth" mode set on the smaller Rebirth Island. Perhaps Season 2 will introduce a third Warzone map with a scale equal to Rebirth Island, this time in southeast Asia.

The Inverse Analysis — While Season 2 is an unlikely time to stage a big, game-ending nuclear event that fans have been eagerly anticipating (it's doubtful a hostage situation calls for a nuke), it's still possible a rescue mission for Adler means something will change in Verdansk. Meanwhile, the Call of Duty community has grown very familiar with Verdansk and Rebirth Island. As a live-service game, Call of Duty: Warzone is ripe for some big changes, whether that means changing Verdansk completely or adding tweaks and twists to make things interesting again.

In past seasons of Modern Warfare, players have witnessed the addition of vertical zip lines, the opening of a soccer stadium, a moving train, and the opening of a giant hole that grants access to underground bunkers. Something equal to that is something fans can expect for the mid-season update of Season 2.

Whatever is happening to Warzone, it can't come soon enough. And who knows what the first-year anniversary of Warzone will bring in March.