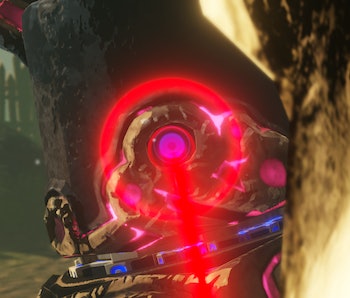 Time travel plays a major role in the story of Hyrule Warriors: Age of Calamity, which released for Nintendo Switch on Friday. That's also been the case for a number of Legend of Zelda games before, but putting it into play during the Breath of the Wild-era of the series has major implications.

It suggests that time travel could be used in The Legend of Zelda: Breath of the Wild 2, and it could differ from other Zelda games by using it in a style akin to Avengers Endgame: What if it's a way to take a victory lap through the series' best games and moments?

The updated Zelda timeline confirms that The Legend of Zelda: Breath of the Wild 2 takes place much further into the future than any Zelda game, not adhering to any one of the three established timelines. If the guardian time travel technology somehow came into play, Link might find that the only way to beat the ancient evil that he's facing could be going to the events of past games and learning about what Ganon did.

Series Executive Producer Eiji Aonuma has said that Breath of the Wild 2 is going to "make the vast world you enjoyed exploring in the original game even more impressive," but what if he doesn't just mean this in the sense that the map of Hyrule is bigger and packed with tasks to complete? What if we could visit locations, and possibly even relive, the events of past The Legend of Zelda games?

One of the best parts of Super Mario Odyssey is revisiting Peach's Castle as you remembered it from Super Mario 64. Imagine being able to the same with Ocarina of Time's version of the Kokiri Forest or Termina from Majora's Mask. Breath of the Wild 2 will be released during the series' 35th anniversary, and a game that celebrates the series' entire history like this would be much more interesting than the Zelda equivalent of Super Mario 3D All-Stars.

If they didn't want to implement this from a gameplay perspective, this time travel series connection could even serve as a collectible like memories were in the first game. Imagine finding a mysterious time portal somewhere in Hyrule and looking through it to learn how a past version of Link was able to defeat Ganon. Breath of the Wild 2 should pay homage to the series' history, and the time travel introduced in Age of Calamity gives them an extremely interesting way to do it.

The original Hyrule Warriors was similarly a series-wide celebration, but it was obviously not canon to any of the Zelda games featured within it. Breath of the Wild 2 would have to be canon. While Inverse hasn't played all of Age of Calamity yet, if time travel exists within the game's world after the events of the prequel, then Breath of the Wild 2 has no reason to not pull and Avengers Endgame and celebrate why everyone loves The Legend of Zelda.