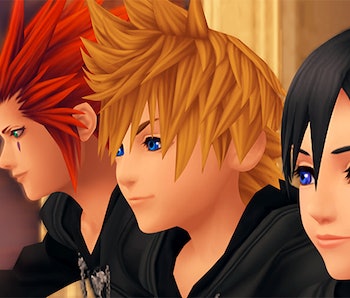 Kingdom Hearts fans have been through the wringer over the years given the series’ fragmented multi-platform releases, chronic delays, and a wide array of review scores, but it looks like the Keyblade faithful on Xbox will have one more hardship to endure on May 31, 2021.

As announced via an official Microsoft blog post on Tuesday, Kingdom Hearts HD 1.5+2.5 Remix and Kingdom Hearts HD 2.8 Final Chapter Prologue will be leaving the Game Pass catalog at the end of the month. In other words, the entirety of the Kingdom Hearts saga prior to Kingdom Hearts 3 will be wiped from Game Pass servers for the foreseeable future. There are obviously plenty of other ways to enjoy these games once they’re removed from the service, but there are only a few weeks left to enjoy them as part of an active subscription.

For the time being, Kingdom Hearts 3 — which was added to Game Pass back in February 2020 — should remain.

Between Kingdom Hearts HD 1.5+2.5 Remix and Kingdom Hearts HD 2.8 Final Chapter Prologue, the collection features access to six full games and three collections of cinematics. Together, it’s almost everything the series has ever offered, other than the third mainline entry.

It goes without saying, then, that there’s an immense amount of value spread across these two store listings. Once May 31 arrives, Game Pass subscribers will be losing access to over 100 hours of JRPG content. While the service’s Japanese footprint has steadily grown under Xbox boss Phil Spencer’s watchful eye, that’s still a huge chunk of genre-specific content being erased.

The Kingdom Hearts series receives perhaps the most flack for its convoluted storytelling, and we’re by no means here to defend its developers at Square Enix for their unquestionable narrative whimsy. That being said, these two collections offer the best chance for players to get in on the ground floor to understand as much of the lore as humanly possible. It’s true that not all of the intricacies are completely comprehensible to even the most ardent of Kingdom Hearts fanatics, but one thing that’s very apparent in these early games is that this is a series with ... heart.

Sora, Donald, and Goofy are three extremely unlikely companions, and that charm never ceases to delight as the trio makes its way across dozens of locales from Disney’s classic cinematic universe. Without saying more than we need to, Kingdom Hearts tells a story that will make you cry as you reflect on memories of your own motley crew of companions. Especially in these late months of quarantine, any reminder of the power of friendship is well worth diving into.

For Disney fans especially, there’s no chance these early Kingdom Hearts games should be missed before their Game Pass exit date. Similar thrills can still be enjoyed via Kingdom Hearts 3, which remains on Game Pass, but the latest installment focuses almost exclusively on worlds based on newer films like Big Hero 6, Tangled, and Ratatouille. If you grew up with the likes of Aladdin, Alice in Wonderland, The Lion King, or even Pirates of the Caribbean, you’ll only be able to revisit those franchises in these collections. The earlier titles are also the only Kingdom Hearts entries with significant Final Fantasy influence too.

If the cinematic influence and a sweet story of Kingdom Hearts isn’t enough to lure you, its gameplay might be the final piece of the puzzle. In the larger pantheon of Final Fantasy games, Kingdom Hearts has been far more influential to modern series games than some JRPG fans care to admit. If you’ve recently enjoyed playing games like Final Fantasy XV or Final Fantasy VII Remake, you’ll instantly notice the interface and action-first combat are ripped straight from Kingdom Hearts. These older-gen titles have occasionally wonky camera controls and dated inventory management, but they exemplify the core DNA director Tetsuya Nomura will bring to Square’s JRPGs for years to come.

While we’d be hard-pressed to say that Kingdom Hearts HD 1.5+2.5 Remix and Kingdom Hearts HD 2.8 Final Chapter Prologue will appeal to everyone, those with an affinity for Square’s JRPGs should absolutely work their way through them. Even once they leave Game Pass, these titles can be frequently found on sale across PlayStation 4, Xbox, and, most recently, PC. With its emotional story, the familiar core gameplay, and its unique brand of Disney tourism, it’s no secret why Kingdom Hearts has become one of the most beloved JRPG series of all time.