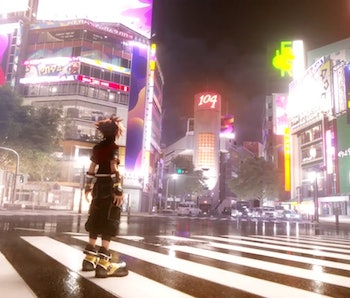 Melody of Memory is unlike any other game in the Kingdom Hearts series. Rather than introducing new twists and turns in the ongoing story, the action rhythm title devotes most of its run time to recapping the previous entries in Square Enix’s Disney-inspired role-playing franchise. Think of it as Kingdom Hearts: The Anniversary Clip Show. Kairi, one of three series protagonists since the first game, runs down all that’s happened in the saga so far, all while revealing some enticing new tidbits about Sora, Quadratum and the future of the franchise.

With the next installment of the series tentatively planned for a 2022 release, those lore nuggets could give us some meaty clues about Kingdom Hearts 4 — or whatever Square Enix decides to call it.

Spoilers for Melody of Memory and Kingdom Hearts 3 ahead.

In Kingdom Hearts 3, the main villain Xehanort murders Kairi in order to create the ultimate weapon, the χ-blade. (It’s pronounced Keyblade, and this ultimate version of the game’s iconic weaponry can summon the all-powerful energy source Kingdom Hearts.) This sends Kairi to the “Final World,” where powerful souls congregate before they “move on” to the afterlife. In the final level of Melody of Memory, we take control of Kairi, who is struggling to find her way back from this purgatory.

Kingdom Hearts 3 and Memory of Melody focus on transforming Kairi from a passive participant along for the ride to a formidable warrior in her own right. In Melody of Memory, we learn more about the night young Kairi was captured by Xemnas and his Heartless brigade. He places her in a machine that sends her to the Destiny Islands, putting Kairi on the path as Sora and Riku.

Before these two most recent games, it was never clear why she was part of this trio, other than to be a damsel in distress. Expanding her backstory and Keyblade skills lends her character more depth.

Sora’s puppy-like devotion to Kairi has been central to the series since the original Kingdom Hearts. In KH3, Sora even takes over her body to defeat Xehanort in the “Final World,” and the villain shifts through his various forms — Ansem, Xemnas and nameless the brown-robed figure, before accepting defeat. He reminds Kairi of what he told her in that lab all those years ago about a world that’s “neither light nor dark” before vanishing. Xehanort is trying to save the world by summoning Kingdom Hearts, allowing him to change his dark vision of the future. He’s traveled through time, taken over bodies and even masterminded the rise and eventual downfall of the robed Organization XIII. Without Xehanort, Kairi might have never left Radiant Gardens, and the whole story might never have happened.

When Ansem the Wise, Ienzo and Even at the Old Mansion study Kairi in the Re:Mind DLC, they discuss what this other could be. The Memory of Melody cutscene doesn’t get much closer to an explanation, but its inclusion here suggests that the mystery of the world that’s “neither light nor dark” will continue to be a major plot point of the Kingdom Hearts saga moving forward.

The biggest shocker in Melody of Memory was the reveal that the nameless star from the KH3’s “Final World” will be the key to finding Sora. The whole “no body” thing has been pretty underwhelming in a universe with every Disney / Pixar character imaginable. (This begs the question: will the Marvel and Star Wars universes ever come to Kingdom Hearts?) It seems likely there’s far more to this enigmatic character than we currently know, but those reveals will have to wait for future installments in the series.

In Melody of Memory, Riku asks the nameless star about the city with large buildings, where they believe Sora is trapped. The nameless star says the only place they know of that matches this description is Quadratum, which is the name of the city from the in-universe video game Verum Rex. The secret ending to KH3 showed Sora, Riku, and Yozora waking up in Quadratum, which bears a strong resemblance to the Shibuya neighborhood of Tokyo. (The KH3 scene features a distinctive building with 104 on it, which looks an awful lot like the real-world Shibuya 109 building.) This world, combining real-world locations with imaginary heroes, is likely to be a major setting for the story to come.

This suggests Kingdom Hearts 4 might take a completely different path from its predecessors, moving away from Disney sweetness and towards something more sinister. Shibuya’s skyscrapers and real world grit seem like a weird place for Goofy and Donald, but that kind of juxtaposition seems more plausible in Kingdom Hearts than anywhere else. Director Tetsuya Nomura’s has developed a reputation for using the series to smash worlds together in unlikely combinations.

With Kingdom Hearts 3 ending the Dark Seeker Saga that’s been building for nearly 20 years, this new approach centered around Kairi’s search for Sora is an exciting prospect.