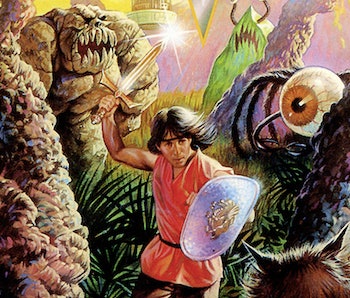 In 1984, anime director Hayao Miyazaki released his second film, Nausicaä of the Valley of the Wind. Based on his own manga, Nausicaä takes place in a post-apocalyptic Earth, where humans have reverted to kingdoms and live in fear of a toxic jungle filled with mutated creatures. An incredibly evocative world, Nausicaä has inspired countless later works. In 1990, looking for an answer to Nintendo’s enormously popular Zelda series, video game company SNK would rip off elements of Nausicaä’s setting and designs for a game called Crystalis.

While the game may not win points for originality, Crystalis surprisingly holds its own as a Zelda alternative, offering a complex challenge backed up with gorgeous 8-bit graphics. If you’re a paid Nintendo Switch online subscriber, you can play Crystalis right now by downloading the Nintendo Entertainment System app.

As opposed to Nausicaä’s Seven Days of Fire, Crystalis starts one hundred years after "1997, October 1, The END DAY." By 2097, humanity has reverted to a farming community. The protagonist, who the player gets to name, was put into a cryogenic freeze before the bombs dropped and is awakened to enter the lovely town of Leaf. From Leaf, he learns from various townspeople and masters about swords, windmills, and destiny.

There’s an inventory of weapons and inventory to fill out, flutes to purchase, and inns for healthy naps. There are townsfolk who tell you about how the windmill isn’t working anymore. There’s gorgeous music playing, which changes as you begin to explore outside the town.

Outside of Leaf, monsters roam the land. Once you pick up the Sword of Wind in town, you can dispatch them with ease. Roaming through the wilderness, the protagonist discovers a number of caves. Within these large caves lie poisonous red blobs, tiny dragons, rock enemies, vampires, windmills, and magic balls that can destroy rock walls.

There’s an impressive sense of scope in Crystalis—it’s one thing to be inspired by Zelda in overhead-style RPG combat, and it’s another to try and match the ambitions of those games. The game’s maps allow for genuine exploration, trying to figure out what will and won’t work to get through various obstacles and enemies. It also doesn’t hold your hand. I died in a cave after all my attacks were ineffective and later figured out it was because I hadn’t leveled up yet. As I have with other NES-era games on the Switch, I found looking at a strategy guide helpful to figure out what my next objective was supposed to be.

Beyond the rock caves lie icy mountains, islands, much larger dragons, poisonous jungles, and a battle between magic and technology. Some of the creatures found in their various areas have a striking resemblance to Nausicaä’s giant invertebrae, the Ohmu. Rather than their tragic, noble story, the game reduces them to weapons. It’s mostly easy to forgive a game from 1990 for ripping off a recent classic—in many creative industries, from blues music to rap, ripping off earlier work uncredited was the norm for years—but such a reduction was a bummer.

Several parts of Crystalis, from its gorgeous opening scroll to the protagonist’s cryogenic chamber to the detail on its enemies, can take your breath away. The weapons shoot out cool blasts, and the game’s many mechanics resemble the complexity of 1989’s River City Ransom, with enemies turning into coins that can be traded for a variety of power-ups, defensive armor, and healing potions.

All of these things sound pretty standard right now, but Crystalis is impressive in how detailed these systems are interconnected. The game gives you $100 through a quick exploration in Leaf. If you spend this on armor, you will need to kill enemies in the field to earn the money to afford the “Alarm Flute” to wake up the sleeping millworker. Killing those enemies will in turn level you up, which will set you up for fighting enemies in the next cave. While the game doesn’t allow for the pure freedom of exploration that Zelda is known for, figuring out how these things all work together (with a little help from a strategy guide, for me at least) was very enjoyable. For a game of its time, the amount of thought put into level construction is serious.

If you have to rip off anyone, it might as well be a master like Miyazaki. Crystalis takes the player back to an earlier time in the video game industry—when it was small enough that a game could engage in some light plagiarism without anyone noticing. But also to when role-playing games were figuring out how to make games just as intriguing in their gameplay as in their plots.