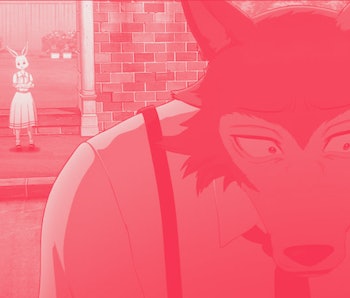 Anime fans in the U.S. have been waiting months for Netflix to release Beastars, the new high-school drama series produced by Studio Orange, which has quickly become the standard-bearer for respectable CG anime. The wait will finally be over on Friday, March 13, when the series will be available to watch on the streaming service.

Before the west is properly introduced to the world of Beastars, here is everything you need to know about the new Netflix original anime series.

What is the plot of Beastars?

Taking place in a world occupied by anthropomorphic animals, the population is split between two types of animals: carnivores and herbivores. The meat and plant Beastars share a tense, but mostly peaceful existence with one another, as everyone is legally supposed to adhere to a vegetarian diet. The most heinous and despicable crime one can commit in this world is the eating of another animal.

In Cherryton High School, an alpaca named Tem is killed and eaten in the middle of the night. Suspicion zeroes in on Legoshi, a socially awkward gray wolf who knew her from the drama club.

Legoshi is used to the distrust that comes with being a carnivore and is prepared to just keep his head down and say as little as possible until the situation blows over. That becomes hard when he becomes infatuated with a white dwarf rabbit named Haru, a social outcast who has a reputation among her classmates as someone who sleeps around with other animals. One of her rumored paramours is Louis, a red deer, head of the drama club, and one of the most fawned-over students in school. (See what we did there?) Louis walks with the confidence of a king, but he secretly resents his nature and is frustrated that Legoshi, a natural predator, hides his inner alpha.

Throughout the series we witness Legoshi attempt to understand the feelings he has for Haru. Is it love? Lust? Or simply hunger? The gentle canine doesn't want to hurt Haru, but he doesn't know if he can contain his natural urges, whether as a young man coming into adulthood or as a predator forced to live in a society where he can't truly be himself.

Is there a trailer for Beastars?

What's the story for Beastars based on?

The series is based on an ongoing manga of the same name, written and illustrated by Paru Itagaki. A graduate of Musashino Art University, where she studied filmmaking, Itagaki submitted Beastars to Weekly Shonen Champion, a long-running magazine aimed at young men, after being unable to find work in the film industry. The magazine accepted her submission, publishing the first chapter in September 2016. In 2018, the manga received a number of awards, including the Kodansha Manga Award, the Tezuka Osamu Cultural Prize, the Manga Taishō, and the New Face Award at the Japan Media Arts Festival.

Itagaki’s work is inspired by early Disney, the work of French comic book writer and artist Nicolas de Crécy, the “mad genius” of French comics, and Austrian painter Egon Schielel, whose work was known for its display of sexuality, which is a major theme in Beastars.

How many episodes of Beastars Season 1 are there?

There are 12 episodes in the first season of Beastars. As is typical of Netflix releases, all of them will drop at the same time, roughly 3 a.m. Eastern on March 13.

Who is working on Beastars?

The anime is the latest from Studio Orange. Founded by CG animator Eiji Inomoto in May 2004, Orange spent their first years providing other studios with CG animation; not producing their own work till the early 2010’s. In 2017, they made a huge splash with Land of the Lustrous, a fully CG-anime action-fantasy based off the 2012 Haruko Ichikawa manga of the same name. The series got an extremely positive reception from anime critics and tastemakers, many of them remarking how Orange was able to design characters and film action scenes on par with 2D animation.

The series is directed by Shinichi Matsumi, who has worked as a second unit director on Hayao Miyazaki’s Porco Rosso and as a writer on the 2011 Thundercats. Nanami Higuchi, who wrote a handful of episodes for the Little Witch Academia series, wrote all twelve episodes. Satoru Kôsaki, who has written music for The Melancholy of Haruhi Suzumiya and a number of Monogatari series, will lend his talents to the anime’s score. Nao Ootsu, who has worked on Punchline and Tanya, The Saga of Evil, did the character designs.

Which voice actors appear in the Beastars cast?

The English dub will feature the voices of Jonah Scott (One Punch Man) as Legoshi, Lara Jill Miller as Haru (Digimon, Lucky Star) as Haru, and Griffin Puatu (Forest of Piano, Ne Zha) as Louis.

Who performs the OP for Beastars?

The series OP is “Wild Side” by the band ALI. It's an absolute banger whose sound recalls the iconic “Tank!” from Cowboy Bebop. The show’s op uses stop-motion animation, which is highly unusual for an anime.

Will there be a Beastars Season 2?

In December 2019, the series official Twitter account announced a second season would be going into production, featuring new characters drawn from the original source material.

As of this writing, there is no official release date for Beastars Season 2.