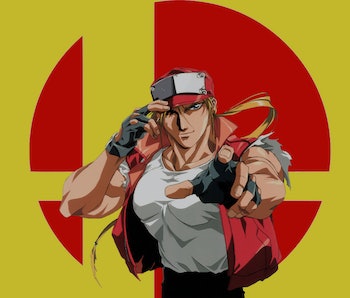 Banjo and Kazooie might have just been added to the Super Smash Bros. Ultimate roster, but the fourth DLC fighter is only two months away. Nintendo revealed that Terry Bogard, the protagonist of SNK’s Fatal Fury and King of Fighters series will join the cast in November.

The surprise reveal was polarizing. For some gamers it was the return of a fighting legend, on par with Nintendo’s addition of Street Fighter’s Ryu and Ken in Smash 4. While others had never seen this shredded blond dude in their gaming career.

The macho, American street brawler was the main hero throughout the entirety of the Fatal Fury franchise, which came to an end with the release of Garou: Mark of the Wolves in 1998. But Terry remained a mainstay character in all of the King of Fighters games, including 2016 title King of Fighters XIV.

Terry had humble beginnings as a street urchin until he was adopted by Jeff Bogard that would become a father figure to him. When he was still young, Terry witnessed the death of his adopted father at the hands of the chief antagonist of the Fatal Fury series, Geese Howard. Since then, Terry has dedicated his life to mastering marital arts to avenge Jeff.

The beloved character has been kicking ass for more than twenty years and he’ll soon put the hurt on the entirety of Smash Bros. Ultimate. Here’s when to expect Terry to join the battle and what his skillset might look like.

Terry will hit Switches around the world sometime in November. We don’t know exactly when, but November was confirmed and a release early that month seems possible.

The Japanese gaming company has waited at least a month between each DLC fighter release. Joker became available on April 17, Hero joined the roster on July 30, and Banjo-Kazooie became playable on September 4. So don’t be surprised if Terry is released in the first week of November.

Nintendo said the fighter isn’t quite ready for his debut yet, but a sneak peek of the character during the latest Direct suggested Terry is far along in development.

What Will Terry Bogard Look Like In Smash Bros. Ultimate?

Nintendo hasn’t showed off any of Terry’s alternate skins yet, but he’s been featured without his hat and in a red jean jacket in King of Fighters XIV. So sleeve-less and sleeved Terry might be the two sides of the character Smash Bros. Ultimate fans could have access to.

What Will Terry Bogard’s Skillset Be Like in Smash Bros. Ultimate?

Sakurai also showed off two of what appeared to be Terry’s special moves (B-Button moves) during his sneak peek. Nintendo didn’t name these abilities but diehard Fatal Fury and King of Fighters will know them on sight.

Power Wave has been Terry’s defining move throughout the character’s existence, it’s essentially his Hadouken. He amasses chi energy in his hand and slams the ground to send a grounded projectile straight forward. This could be his Neutral Special move.

Burn Knuckle is yet another one of Terry’s iconic attacks. He surrounds his fist in energy and lunges forward to deliver a fierce punch. This could be his Side Special move, similar to Little Mac’s Jolt Haymaker.

Nintendo is clearly remaining faithful to the King of Fighters franchise with both of Terry’s confirmed moves identical to how they’re executed in King of Fighters XIII (2010). This suggests that many of his Smash Bros. Ultimate attacks will be lifted straight from the SNK games.

What Other Moves and Mechanics Could Terry Bogard Come With in Smash Bros. Ultimate?

A lot remains unknown about Terry’s arsenal in Smash Bros. Ultimate, but looking back at his moves in King of Fighters can provide evidence about the abilities he might come with in November.

Crack Shoot is a likely contender for a spot in Terry’s skillset as his Forward Smash. The brawler surrounds his leg in energy and executes a jumping axe kick that lunges him forward.

Rising Tackle could either be Terry’s Up Special or Up Aerial. The maneuver propels him upwards while he delivers a series of devastating kicks in rapid succession. It’s very similar to the corkscrew flying kicks that Joker, Sheik, Samus, and Greninja have access to as their Up Aerial.

Power Geyser might end up being Terry’s Down Smash. The attack is a more powerful variant of Power Wave, which he pulls off by punching the ground and unleashing a spout of energy where his hand meets the pavement. This could work similarly to Samus, Zero Suit Samus, and Snake’s Down Smashes.

Power Dunk or the Star Dunk Volcano might be chosen as Terry’s Final Smash. The destructive technique is Terry’s most powerful move in the King of Fighters series. It begins with a flying knee that blasts his enemies upwards and ends with a punch to the chest, shooting the opponent downwards and into a massive Power Geyser.

None of these moves have been confirmed. But seeing how true to the Fatal Fury and King of Fighters series Nintendo was with Terry’s first couple of revealed moves it could pull from all of his signature moves to build out the rest of the character for Smash Bros. Ultimate.

All of the Smash Bros. Ultimate DLC fighters can be purchased with either the $24.99 Fighter Pass or individually for $5.99 upon their release.