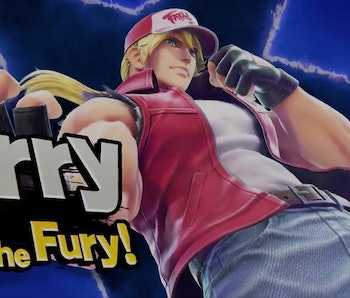 The rumors are true: An SNK character is joining Super Smash Bros. Ultimate, and it’s Terry Bogard from Fatal Fury and The King of Fighters.

Terry Bogard, one of the main protagonists from SNK’s popular fighting franchises Fatal Fury and The King of Fighters, is joining the game to duke it out with Mario, Link, Samus, Ryu, and more.

Terry will make his Smash debut this November. A definitive release date was not revealed.

The Nintendo Direct included a stylized video reveal, in which various characters from The King of Fighters (including Mai Shiranui and the villainous Iori Yagami) try and fail to obtain the Smash Bros. invitation envelope. But the envelope eventually lands before Terry Bogard, who picks it up to confirm his inclusion to Nintendo’s crossover game.

An American martial artist who seeks to avenge his father’s murder, Terry Bogard is recognized for his signature red hat, vest, plain English catchphrases, and powerful super punches. In 2012, Complex ranked Terry Bogard as the eleventh Most Dominant Fighting Game Character (out of 50 total).

While Sega and Nintendo is the most famous rivalry in retro gaming, SNK was also a big player in the ‘90s with the powerful and expensive Neo Geo consoles. With the Super Smash Bros. games having increased its scope beyond Nintendo, Terry alone represents SNK, which has its place in gaming history.

Fatal Fury, and eventually The King of Fighters, is SNK’s flagship franchise, with multiple video games, spin-offs, and even animated adaptations. A 2010 live-action film adaptation, The King of Fighters, featured Deadpool 2 and Hobbs & Shaw director David Leitch in the role of Terry Bogard alongside an ensemble cast that included Maggie Q, Will Yun Lee, and Ray Park. In 2018, SNK produced and released a 24-episode CGI anime, The King of Fighters: Destiny, which can be watched in its entirety on YouTube.

In addition to Terry, Nintendo made another surprise announcement. After the fifth, still yet-to-be revealed Super Smash Bros. Ultimate DLC character, more characters will be added as new DLC. It is not yet known how many more characters are in development, nor any inkling over who they could be.