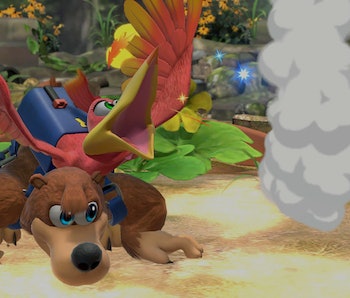 Nintendo shook the Super Smash Bros. Ultimate fandom Wednesday with the release of Banjo and Kazooie, the reveal of SNK’s Terry Bogard as the game’s fourth DLC fighter, and that a reveal that even more characters are under development. To top off the monumental Nintendo Direct, the company even announced a new version of Smash Bros. Ultimate.

Most notably the patch buffed one of Hero’s most powerful abilities and it fixed an annoying air dodge quirk.

Here’s a breakdown of all of the changes coming to Smash Ultimate with its fifth update:

Hero, Smash Ultimate’s third DLC fighter received three changes one of which buffed one of his strongest spells: Magic Burst.

One of Smash Ultimate’s biggest flaws was fixed in 5.0.0. Before players couldn’t directionally air dodge and land while holding shield. The game would buffer a roll or spot dodge upon landing even if the player wasn’t holding their joystick in a direction.

The 5.0.0. patch fixed this issue and lets players safely land with their shield out without the fear of rolling into a bad spot.

If two characters’ grabs clashed before, some characters weren’t able to act as quickly as others, giving certain fighters a slight advantage. Now, the end lag of grab parrying is universal.

Yoshi wasn’t able to buffer a grab after rolling in 4.0.0 like every other character. Wednesday’s patch fixed this weakness in dinosaur’s kit.

The hit boxes for Peach and Daisy’s Up Special should seamlessly connect into each other now. That means opponents should fall out of the move less frequently.

Peach and Daisy’s Up Special leaves the princesses extremely vulnerable. Fixing its hit boxes means Peach and Daisy players can use the move more aggressively without the fear of enemies dropping out and punishing them.

In Smash Ultimate, grabbing onto a ledge that has already been grabbed by another player will gently remove them from the ledge, a mechanic known as “ledge trumping.” Every character had the ability to do this except Nana, the second half of the Ice Climbers duo.

With 5.0.0 now in affect, Nana can ledge trump and allow Ice Climbers to pull off even more dazzling combos.

Villager’s Up Smash was not able to blast opponents out of a burry, which was a shame because their Down Smash can bury grounded opponents.

Now, Down Smash into Up Smash should work just fine now and be a deadly kill combo at late percents.

Hero’s Snooze spell, which put characters to sleep at range, would keep Rosalina & Luma players from using their star-shaped sidekick. That’s been patched out and Luma can now protect Rosalina if she put to sleep by Hero.

When Joker hit the ground facedown he would take a bit longer to get up compared to the rest of Smash Ultimate’s roster. That’s been fixed and he’s just as fast as everyone else now.

More like this
Entertainment
Sep. 13, 2022
Everything you need to know about The Legend of Zelda: Tears of the Kingdom
By Willa Rowe
Gaming
Sep. 23, 2022
Mario + Rabbids Sparks of Hope devs scrapped a time-manipulation mechanic
By Steven Asarch
Gaming
Sep. 23, 2022
8 can't-miss hits in the Nintendo Switch blockbuster sale
By Joseph Yaden
Share: