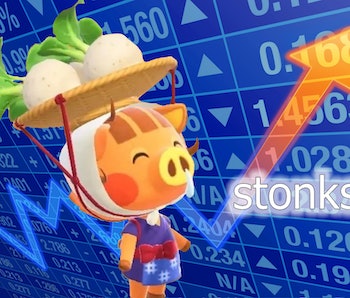 Another week, another chance to make a fortune in Animal Crossing: New Horizons from selling Daisy Mae’s turnips on the Stalk Market. There are plenty of resources out there on how to sell your turnips for the highest price possible, but what are you actually supposed to do if the Nook twins are buying turnips for a high price on your island?

New Horizons lets gamers travel to other players’ islands using the Dodo Code system. When someone visits your island, they gain access to the price that Timmy and Tommy Nook will buy turnips for. That means if your Nooklings are offering a surprisingly high turnip price, it’s worth your time to open up your island to visitors to earn a few extra Bells and who knows what else.

Every week, thousands of turnip traders visit Reddit or Turnip.Exchange in hopes of finding an island where they can unload their turnip stash. Many of these visitors will leave tips. Many players who list their islands specifically request tips or other specific items, so if you want to pad your wallet, consider hosting your island to the turnip traders of the world if you wind up with a big price on your island.

Here’s how to prepare your humble abode for other users:

Get a good turnip sell price

If you want a lot of people to use your island to sell their turnips, then you’re going to need a tempting sell price. Anything over 500 Bells will have turnip traders drooling, so keep an eye out on Timmy and Tommy’s prices. But pretty much anything over 200 is probably worth listing.

Even if you have a mediocre price today, there’s always hope that it’ll spike up tomorrow and you can use a nifty online tool to help you predict when that might happen. Redditor u/mikebryanuk created and published a turnip price prediction web widget, called Turnip Prophet, that attempts to predict turnip prices based on that week’s past prices. There's also ac-turnip.com. If you track the price you paid for your turnips and the Nook brothers' price twice per day, then it will predict the pricing trends on your island with startling accuracy.

In either case, you still need to keep track of your prices on a rolling basis and they'll offer estimates based on previous data. Keep in mind these are approximations based on predictable turnip price patterns players have noticed, so the tool can and will be wrong — but it's also your best chance at getting advanced notice if your price spikes. If you do find yourself in the lucky position of having a solid price on your island, you need to do some logistical work to make it suitable for visitors.

Fence off your island

So you’ve noticed that the Nooks on your island are buying turnips for 500 or even 600 Bells?

That’s a surefire way to earn a little extra Bells on top of the killing you just made, but before you get you Dodo Code and post your island online you’re going to want to do a little fencing.

If your turnip price is high enough, you could have hundreds of people trying to gain access to your island. To ensure none of them dilly-dally when they arrive, fence off a path straight from the airport to your instance of Nook's Cranny. Hopefully, you already placed the store close. Otherwise, you might have to use a lot of fencing to streamline the experience for visitors.

Get your Dodo Code

Next, you’ll need to head to the airport to get your Dodo Code. Speak to Orville, the blue-feathered Dodo behind the counter in the lobby. Select the “I want visitors” option in the dialog choices.

That will bring up a couple of invite options. Choose “online play.” Orville will then ask you who you want to invite to your island, you want to select “Invite via Dodo Code” since none of the people who see your turnip listing will be on your friends list.

Finally, select “the more the merrier” option that Orville brings up, which will temporarily open your island to anyone who has your five-character Dodo Code. He'll try to caution you against strange visitors, but ignore those warnings.

Where to list your island for turnips in Animal Crossing: New Horizons

You can have seven people visit your island at once, but because it'll be a steady stream of people in and out, you'll want to allow a fewer number than that at once. The in-game animation as new players arrive and old ones leave can be irritating. Limiting it to four visitors at once is wise, and you can even tell them to wait until everyone has sold before you boot them all.

If there's a particular recipe or piece of furniture you really want, you can mention it in your listing. You can also suggest tips or require them. It's really up to you. But if you have a ridiculous price, players will do just about anything to access it.

Head to the ACTurnips subreddit if you want to host your island the old-fashioned way. This way can get a bit overwhelming if your island has a good price, as you’re bound to get an influx of direct messages, but it’ll get the job done. There are a few rules you’ll need to follow to make sure your post doesn’t get taken down.

First off, start the title of your listing with “[SW]” to tag it as a New Horizons post then list your price. It’s up to you to decide how you want to deal with requests in the body of your post, we suggest using Google Forms to make a list of everyone who wants access, like this Redditor.

Keep in mind you can’t demand an entrance fee, but most visitors will tip once they leave. The subreddit’s rules suggest a 10 percent tip of however much a player makes on your island.

Turnip.Exchange essentially automates the Reddit process for you, so think of it like the turnip eBay. You’ll want to hit the “Host” option once you get to the site’s homepage and input your Dodo Code to start populating your post.

The site will automatically build a queue of players that want to join your island and distribute your Dodo Code accordingly, so it's a much lighter lift than the Reddit option. Once again, you can’t charge an entrance fee feel free to ask for a tip in the description, especially if you want something other than Bells. The system will automatically distribute your Dodo Code to players in the queue, but it's up to you to click the red X next to players as they leave your island.

Finally, there’s a new turnip trading platform on the block called Animal Crossing (NH) Exchange. As it stands, it’s only an iOS app, so you’ll need to have an iPhone or an iPad to access it. Keep in mind that there are less users on this app than on Turnip.Exchange so you’ll most likely get less traders on here than you would on Turnip.Exchange. A smaller number of users means that it's not as good for buyers, but it's still pretty viable for sellers. If you have a high price on your island, then users will still line up in droves.

To start hosting simply click “Turnip Hosts” on the app’s first page, then plug in your price, Dodo Code, and a stop time if you want to halt trading at a certain hour. After that, the app will take charge of creating a queue and passing out your Dodo Code.

More like this
Gaming
7.3.2022 4:00 PM
You need to play Sega's most underrated platformer on Nintendo Switch ASAP
By David Grossman
Gaming
7.1.2022 5:00 PM
15 years later, the smartest shooter ever made still holds up
By Joseph Yaden
Gaming
6.30.2022 5:06 PM
Everything you need to know about the hyped Metroid Prime remaster
By Joseph Yaden
Related Tags
Share: