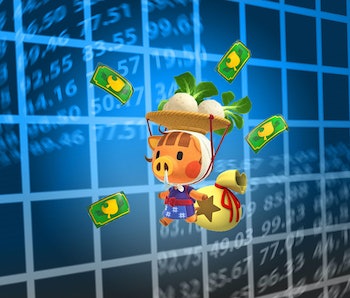 At some point, every up-and-coming Animal Crossing: New Horizons entrepreneur must trade Daisy Mae’s turnips on the Stalk Market. There’s a bustling online community of turnip traders that use the Turnip.Exchange platform to travel to each others’ islands in search of the highest buying price. But a number of Redditors claim the Stalk Market has been disrupted by an influx of bots. For anyone looking for shorter queues, you might be in luck with a new mobile app that has emerged as an alternative.

Stalk Market watchers on Reddit have noticed queues for islands with the best prices fill up rather quickly on Turnip.Exchange, prompting allegations some players are writing scripts to hold their place in line. Matthew Jakubowski, who runs the company that created Turnip.Exchange, tells Inverse that this is due to the monthly userbase having grown to 1.3 million users in an organic fashion. The platform uses Kasada Polyform which auto-detects bots without having to use CAPTCHA.

Software engineer Devon Bernard has created an alternative solution to what looks like a bot problem: A separate turnip-trading platform that works almost identically to eBay.

“My girlfriend is a big Animal Crossing fan. She was trying to use subreddits for trading, but it was really inefficient,” he told Inverse. “[So I] brainstormed some ways to make it more effective, [like] allowing hosts to update listings, make lines, only share code when up-next/invited, allow people to join lines without tracking extra codes, prevent bots with CAPTCHA.”

After three days of work, Bernard created Animal Crossing (NH) Exchange, a free turnip trading app for anyone fed up with Turnip.Exchange. Bernard’s platform gives players more control of their listings by using Captcha Verification to ward off bots. It also has a user rating system.

The app has been available for just a week, Bernard said it had more than 16,000 users as of April 10. That influx of users has turned his fun side project into a bit more of a job, but he told Inverse he's been happy to keep up with squashing bugs and listening to user feedback.

“The response has been crazy awesome,” he said. “As soon as we posted it, [so] many people [were] trading and reporting it [worked] much smoother than anything else they've tried. We've been flooded with feature requests, but are working nearly round the clock to complete them.”

For now, Animal Crossing (NH) Exchange is only available on iPhones and iPads but Bernard said it will be available for Android users as soon as Google is done reviewing his submission.

So if you want an alternative way to unload your stash of turnips this week, or simply want to check if there are better prices outside of Turnip.Exchange, look no further than Animal Crossing (NH) Exchange.

Animal Crossing: New Horizons is out now for Nintendo Switch.

More like this
Gaming
1 hour ago
19 images that prove Splatoon 3 is the Switch's most stylish game
By Robin Bea
Gaming
2 hours ago
Everything you need to know about Splatoon 3
By Jess Reyes and Joseph Yaden
Gaming
8.8.2022 6:17 PM
Now is the perfect time for Nintendo to revisit Xenoblade Chronicles X
By Hayes Madsen
Related Tags
Share: