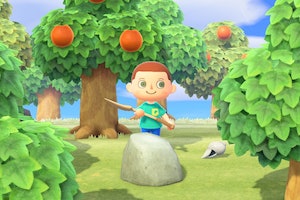 methods to get more ore

‘Animal Crossing: New Horizons’ Iron Nuggets: 3 best and worst ways to get them

As you’re building out your island in Animal Crossing: New Horizons, you'll need to use a variety of tools to build your home and shape the island to your liking. You'll soon discover that many key recipes least one Iron Nugget, but it's a surprisingly scarce resource. If you’re having trouble gathering enough metal, you might be missing out on necessary mining tactics.

Below, we've put together three surefire strategies to make sure you maximize your Iron Nuggets and can craft to your heart's content in New Horizons.

Iron Nuggets are obtained by hitting boulders found on your island with either a shovel or an ax. This will prompt the boulder to release resources like Clay, Stone, and most importantly Iron Nuggets. Each boulder on your island can be mined once per day.

Most importantly, make sure to alleviate your body of any fruits prior to mining. If there’s a fruit in your body, you’ll have a little extra power, which will destroy the boulder. Do not accidentally destroy your boulders.

This will stop you from mining the resource until the rock respawns, which can take some time. Additionally, if you smash a boulder, it’ll only yield one resource spawn, while mining it without fruit will get you up to eight resources. There’s also a special trick to speed up the collection process.

2. Mine with greater efficiency

When you hit a rock, your character will be shocked by the boulder’s inflexibility, causing them to instinctually jump back after every hit. You can stop this. Turn away from the rock you’re about to mine and use your shovel to dig two holes behind your character. This should act as a barrier to stop your character from jumping back, allowing for a more consistent hitting flow.

One of the boulders on your island will release a deluge of bells every day. The more you hit the bells boulder in the timeframe, the more bells will be released. This technique can be used to get more hits within the brief timeframe, thus making you far richer. Who knows what you can do with all that affluence?

1. Go to a Mystery Island or time travel

If you’ve gone through all your boulders for the day and still lack the necessary Iron Nuggets to build your passion project, you have options. Your first option is time travel, the controversial technique to circumvent New Horizon’s real-time clock. This will let you hop into the future, allowing space to obtain more rocks from your island.

If the prospect of cheating turns you off, you can also utilize Tom Nook’s Mystery Island Tour. Purchase a Nook Miles Ticket via the Nook Stop in Resident Services for 2000 miles. The ticket can be used once you unlock Nook Miles+ on Day 2. Take the ticket to Orville at Dodo Airlines to partake in a Mystery Tour island.

Each Mystery Island will be home to a new selection of boulders, facilitating even more Iron Nugget collecting. If you're short on funds, try the infinite bells glitch, though be aware that the latest update to the game will patch this cheat. Collecting and selling more will provide more Nook Miles, thus more travel money.