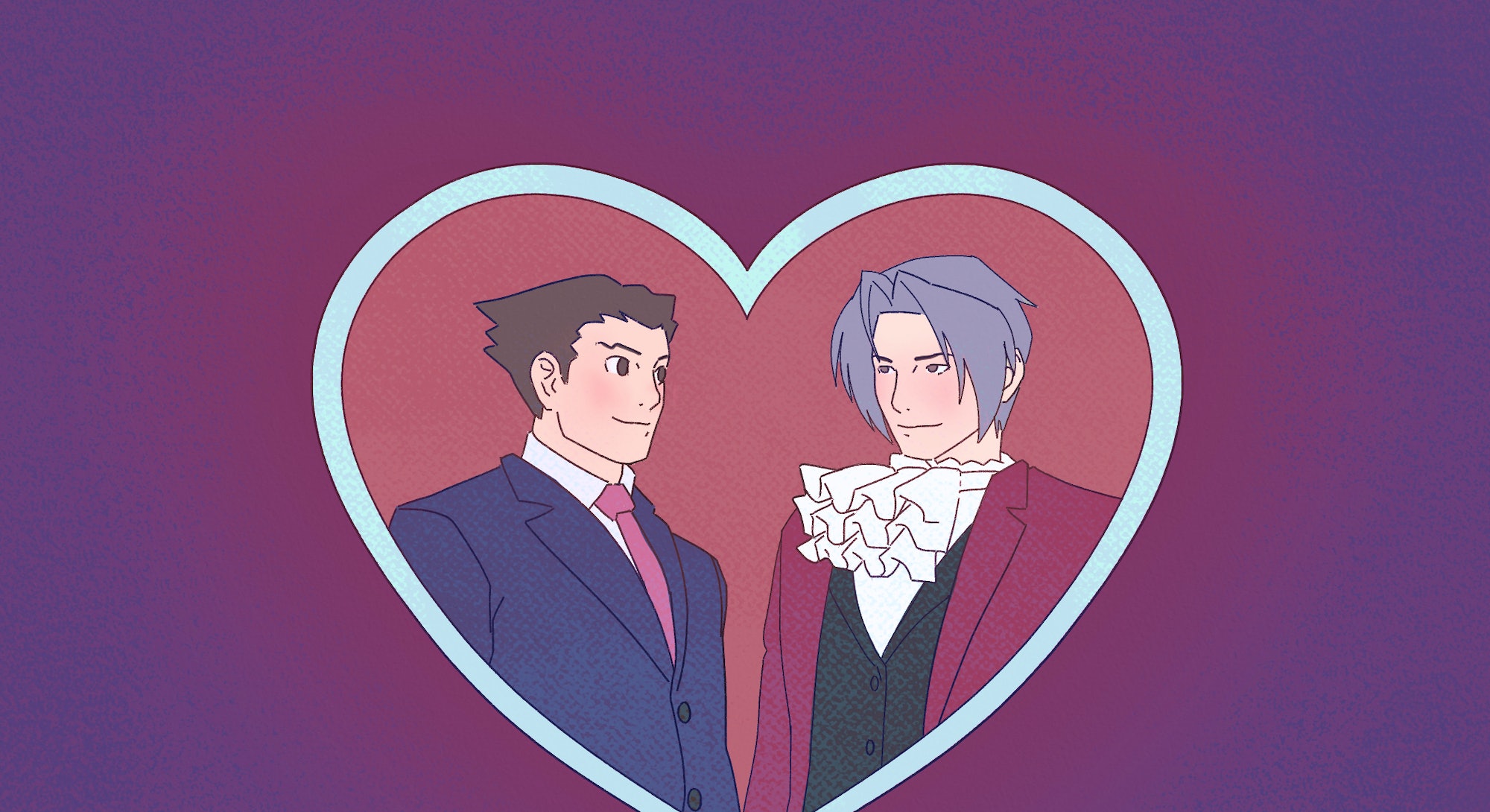 “The entire game revolves around these two men dancing around each other. The courtroom battles are like a tango, a back-and-forth exchange.”

The relationship between the upbeat defense attorney and the aloof prosecutor has become one of the most popular character “ships” in video game fandom. (Shipping has been around since the ‘60s heydey of Kirk and Spock, and usually refers to fans’ use of artwork, fanfiction, or memes to construct wishful-thinking romantic pairings.)

Narumitsu, based on the Japanese names of Phoenix Wright (Naruhodo) x Miles Edgeworth (Mitsurugi), stands out among a sea of Reylos and Gendryas. That’s because there are so many canonical details that could easily be construed as indicating romance between the two. That’s led to a massive community popping up around Narumitsu, including a dedicated subreddit.

Countless little details in the Ace Attorney series have fueled this long-running ship, like a flashback in the “Turnabout Goodbyes” case, which reveals Phoenix was inspired to become a defense attorney after Miles defended him during a class trial when they were children. That means Phoenix has quite literally orbited around Miles for most of his life — and underscores that their bond runs far deeper than mere professional rivalry.

“People want to feel represented in the media they consume, and Narumitsu is a good example of that. These characters are both men who have a lot of canon and non-canon interactions that could suggest feelings between them,” explains Evelinessa, a mod of the subreddit.

Even on a surface level, the relationship between Phoenix and Miles is unique. Throughout the Ace Attorney series, it’s clear these two men genuinely love and care for each other. Once in a while, they manage to speak honestly about those feelings. It’s a massive breath of fresh air compared to the usual machismo of male video game characters.

There’s more to Narumitsu than snippets of dialogue and meaningful glances. Stenger points out that one of the key talents behind the series has a proven track record of creating captivating romances.

“It absolutely helps that character designer Kumiko Suekane was a BL (Boys’ Love) artist who directly coached writer-director Shu Takumi in how to make Phoenix and Edgeworth's relationship endearing and interesting. She's responsible for a lot of their personality quirks that make their dynamic very compelling and cute to watch. You can also see her proclivity for the ship in the official bonus art she's made,” says Stenger.

Even though Capcom has never outright confirmed Phoenix and Miles have feelings, this is the foundation for a long history of little hints and nods. A massive five-part fan-made essay on Archive of Our Own walks through all of the “proof” presented across the series. In Japan, Capcom released officially licensed wedding rings based on Phoenix and Miles, in collaboration with a company called Material Crown.

In a Capcom blog post from 2014, Takumi wrote, “With the theme of the [fourth] episode being ‘rekindling the relationship’, I tried to paint a picture of the intensely strong bond of friendship that two men can share, but I wonder if that’s what people got out of it? There seems to be those who would suggest that Phoenix and Edgeworth’s ‘intensely strong bond’ is more of an ‘intensely passionate bond’ of sorts.”

While the hints all seem to be there, Capcom has always shied away from explicitly confirming any kind of LGBTQ relationship in Ace Attorney, which could very well have to do with the culture of Japan, or even simply the struggle for inclusion across the world. Even in the Western market games hugely lack LGBTQ representation, outside of specific indies and the very rare AAA title like Dragon Age.

“There's the obvious explanation of how homophobia affects marketing. It would probably be too much of a ‘risk’, which sucks, but that's the slow-changing reality right now,” Stenger says. “I can see why they wouldn't do it for story reasons, too. The subtlety and will-they-won't-they aspect certainly keeps people coming back — and sells merch.”

There are other story reasons that the Ace Attorney series avoids romance as a whole. An admin of the fansite Court Records, who goes by General Luigi, says, “Unless future games relegate Phoenix and Miles to the role of minor characters, there’s not really an effective way to write them as lovers without running the risk of creating what TV Tropes calls a ‘romantic plot tumor.’ I wouldn’t be surprised if that risk is a factor in Phoenix — and other protagonists, for that matter — not having consistent canon love interests.”

“The subtlety and will-they-won't-they aspect certainly keeps people coming back.”

Still, seeing characters like Phoenix and Miles officially confirmed at LGBTQ would be a massive step forward for representation in games, and it’s clearly something that thousands of passionate fans want to see. The game industry at large still struggles with marginalized representation in every regard.

“People want to feel represented in media they consume, and having more LGBTQ characters and couples in gaming is a way for people to feel represented. To improve it, I believe it needs to be more common to see main characters who are queer and have relationships with other characters. While subtext and queer coding are nice, we need to have more instances where it’s explicit, rather than implicit,” says Evelinessa.

That’s likely part of the reason why character ships like Narumitsu are so popular, it gives players a chance to feel represented, explore their own identities, and find others that are like-minded. In a void of representation, fans have essentially created their own.

“Getting invested in these ships and characters allows you to see yourself, and your own feelings, in new ways. There are dynamics of love and attraction and identity that might not feel "safe" to practice in the real world, but that can be explored in fantasy. You learn things about yourself. People identify with characters who share their feelings, experiences, traumas — it puts things in perspective,” says Stenger.

“We need to have more instances where it’s explicit, rather than implicit.”

While we probably won’t see Miles and Phoenix smooching in the courthouse in any of the Ace Attorney games anytime soon, Capcom has created a lasting legacy with the series and an array of characters that are instantly recognizable. The depth of storytelling and the humanity of its characters are a huge part of what makes them so “shippable,” whether Capcom likes it or not.

Stenger sums up the relationship between Phoenix and Miles in the perfect way.

“You can tell their personalities at a glance, and you know from their poses what the game's all about. Without knowing a thing about Ace Attorney, most video game enjoyers can see them and be like ‘oh, those are the gay lawyers that yell at each other.’ They're well-written, well-designed, and just classic.”