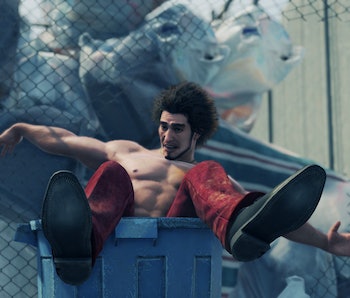 This year had no shortage of memorable game protagonists. The Last of Us Part II gave us both Ellie and Abby, Ghost of Tsushima introduced Jin Sakai, and Hades hero Zagreus stole all our hearts. But 2020’s best playable protagonist isn’t a tortured soul or a strong, silent badass; He is a complete buffoon.

Ichiban Kasuga, the RPG-loving hero at the center of Yakuza: Like a Dragon. is that buffoon.

When the game begins, he’s a low-ranking member of the Arakawa crime family who’s filled with boundless optimism. He’s a naive goon obsessed with Dragon Quest because he sees himself as a hero capable of leveling up and reaching his full potential. It’s all a little precious coming from someone who wants to rule the criminal underworld someday.

Previously, the action series primarily focused on Kazuma Kiryu, a dopey himbo who’s ultimately a cool, collected strong man. By comparison, Kasuga is a clown. He’s a full-on goofball far too eager about everything. Imagine a human puppy dog constantly begging for someone to throw the ball.

That personality lends the game its hysterical comedic edge, but Kasuga isn’t merely a shallow gag. He has the best character development of any video game protagonist this year, bar none. By starting from such a naive place, Kasuga is allowed to do something that few game heroes get to do: He gets to make mistakes.

Early on in the game, Kasuga finds himself in a homeless camp after falling on hard times. Frustrated with his new situation, he tries to spin that negativity into a rah-rah moment by giving the camp a motivational speech about how everyone needs to pull themselves up by their bootstraps and change their life by finding a job. I cringed through the scene until one of Kasuga’s companions, Nanba, intervened. Nanba scolds Kasuga for failing to understand the reality of the homeless crisis and how society makes life challenging for the people he’s trying to casually hype up.

What’s amazing about that moment is that Kasuga genuinely listens. Every time he says something dumb, he’s fully receptive to criticism. By the end of the game, it’s clear that he’s taken all of those lessons to heart and adjusted his outlook on life accordingly without sacrificing his positivity.

Video games are weird when it comes to character development. Usually, growth is measured solely by power. We watch the Doom Slayer go from gunning down one demon at a time to taking out an entire room in one BFG shot and that’s how we know he’s stronger by the end. It’s rarer to see the kind of genuine emotional growth that requires players to sit with a vulnerable character.

Like a Dragon made me realize how few games let you play as an idiot. Isn't that odd in some ways? Games used to only offer players with a strong, silent character as their avatar. The idea was always to give players a sort of blank slate that’s easy to project onto, like a piece of human tofu. But I’ve never felt more like a character than I did playing as Kasuga. I could see myself in all his little screw-ups. More importantly, I could see myself in all the ways he overcomes them.

Kasuga’s brand of optimism might not be what people really wanted to hear in a tragic year like 2020, but his story is exactly the kind of thing that I needed going into 2021. Part of Kasuga’s incompetence comes from the fact that he spends 18 years in prison early in the game. When he reemerges, the entire world has changed. His position in the Yakuza is essentially non-existent, his relationships have shifted, and what the hell is this smartphone thing anyway? It’s hard to blame him for being confused.

While in lockdown, I hadn’t given much thought about what it’ll be like to reenter the world post-pandemic until reflecting on the game. In my head, I was naively optimistic that it’d be like flipping a light switch back on. Then I had a moment where I realized just how much had changed about my life since March. My career has shifted drastically, my close friends moved away, and so many of my routines have either evaporated or been digitized.

Our situations certainly aren’t the same, but Kasuga became something of a rock for me. He’s undeterred by everything life throws at him and never stops believing that he can always find a way to level up, just like in the games he loves. It’s easier said than done for a video game character, but easy is comforting right now.

In such a dreary year where it was hard to have any hope for the future, we needed a source of unbridled optimism to keep our heads on our shoulders. Like Twin Peaks: The Return’s Dougie Jones or the Philadelphia Flyers’ Gritty, Kasuga is a special breed of fictional doofus that reminds us that growth comes in many forms. But there are still wholesome, fruitful ways to evolve as a person in spite of all that.