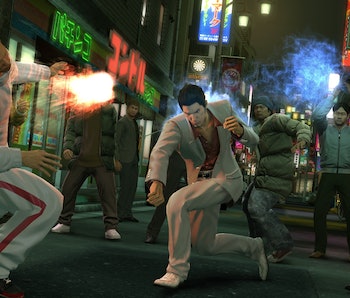 There aren’t enough Christmas games. While movie-goers have a bounty of holiday options to choose from every year, few video games really get players in the Christmas spirit. Luckily, there’s one excellent option out there, and if you're an Xbox Game Pass subscriber right now.

Yakuza Kiwami is the ultimate Christmas game — and that’s no joke. While Sega’s action-adventure game isn’t explicitly about Christmas in the way that something like Elf is, it’s about as close as games get, thanks to its holiday backdrop.

Like other Yakuza games, Kiwami tells a sprawling story about Japan’s criminal underworld. It’s a bloody tale filled with maniacal yakuzas and an all out war through the streets of Kamurocho. Okay, admittedly, that doesn’t sound terribly festive, but the good cheer becomes more apparent the deeper we dig.

On a basic aesthetic level, the game takes place during December, as do many other entries in the franchise. Carols can be heard around the city and the streets are decorated with red and green banners. More explicitly, there’s an entire sub-quest that centers around helping someone find their crush the perfect Christmas gift.

The holiday doesn’t play a major role in the game’s main plot, but it shares a key thematic parallel with most Christmas movies: it’s about family. That’s a thread that runs through all Yakuza games, but it’s especially at the forefront of Kiwami. Yakuza clans are treated like one big dysfunctional family in the series, not unlike A Christmas Story. One could say that Kiwami’s protagonist Kiryu is really just a modern Ralphie.

This all sounds ridiculous, but video games just don’t tackle the holidays in a meaningful way. With action at the forefront of so many major studio games, few offer the kind of personal introspection and warm vibes that are expected from Christmas media. The best you can hope for is a snowy setting in something like Batman: Arkham Origins or Spider-Man: Miles Morales. Kiwami has no shortage of thrills, but its commitment to light melodrama means that it’s able to tell a more sincere tale that’s not too different from our favorite holiday comfort movies.

In general, we have to ask ourselves “what even makes something a Christmas movie (or game) to begin with?” Does the central plot have to culminate in a couple kissing beneath the mistletoe? Is it a no-go if there’s not a big family feast? Santa or bust?

That debate has been raging for years as people try to stretch the definition to include a wider swath of media and it’s always a sore point of debate every time. I posit that good Christmas media doesn’t need any of the arbitrary traditions; it just needs the season and the proper vibes.

In that sense, Yakuza Kiwami is as warm and gooey as Christmas morning. The story has its fair share of tragedy, but there’s plenty of morose sadness lurking in some of the best Christmas stories. A Christmas Carol is about a rich guy who sucks so much that a ghost shows him that no one will care when he dies. So why can’t a game about a big himbo knocking gang members out be a Christmas game?

Yakuza Kiwami is available to play for free on PC and Xbox via Xbox Game Pass.

More like this
Gaming
Jan. 28, 2023
The most daring Yakuza game is also the franchise’s best
By Willa Rowe
Gaming
Jan. 27, 2023
Like a Dragon: Ishin blends Yakuza's weirdo humor with stylish samurai flair
By Jen Glennon
Gaming
Jan. 22, 2023
You need to play the best Tetris knockoff on Nintendo Switch ASAP
By David Grossman
LEARN SOMETHING NEW EVERY DAY.
Related Tags
Share: