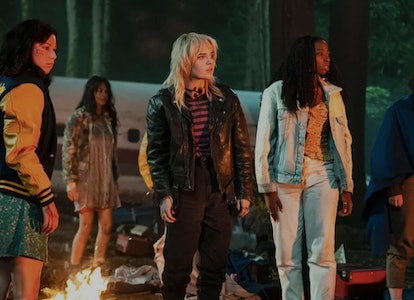 Yellowjackets might be the best puzzle box show since Westworld Season 1. (Yes, I know we’re all comparing it to Lost, but that was almost 20 years ago and television has moved on.) This breakout Showtime series is packed full of mysteries, but as Yellowjackets barrels towards its Season 1 finale, one fan may have figured out a huge twist.

Warning: Possible spoilers for Yellowjackets below.

Yellowjackets is extremely sparing with information to the point where we still don’t know who from the plane crash ultimately survives beyond Natalie, Misty, Shauna, Taissa, and Travis (R.I.P.). However, aside from a couple of other unfortunate characters, it’s possible that many of the girls stuck in the wilderness did survive but just haven’t appeared in the show’s present so far. Namely: Jackie.

As one of the main characters in the wilderness timeline, Jackie is clearly an important part of Yellowjackets. It’s unlikely she simply dies off during the winter of starvation, so there are two likely options: either she’s the girl that everyone winds up eating, or she survived the entire ordeal.

Either option seems possible, but one clue could blow the entire mystery wide open.

The Yellowjackets theory — Back in Episode 6, when Shauna and Jeff visit Jackie’s parents for brunch on her birthday, Shauna sneaks away to her former best friend’s childhood bedroom. There, she opens Jackie’s old journal to read a list of songs and movies (plus an old game of M.A.S.H.) that seem innocuous at first.

However, a closer look at the list reveals something interesting: a lot of the movies mentioned by Jackie weren’t released until after the plane crash.

On Reddit, u/DullAmbition breaks down some of the potential issues with Jackie’s journal entries:

Songs: Wannabe by the Spice Girls didn’t break in the US until 1997. Some of the other song dates might be later as well.

Movies: The Craft and Scream were late 1996. Some other borderline release dates too.

Movie Characters I Would Be:

Torrance Shipman from Bring It On - Released August 2000

The Inverse analysis — So what does this all mean? Again, there are two options.

Option 1: Jackie didn’t survive and someone in the Yellowjackets props department messed up big time. This is definitely possible but feels like a stretch given how many mistakes were made, the show’s general attention to detail, and the fact that the camera lingered on those journal pages.

So assuming it wasn’t a mistake, what does it mean?

Option 2: Jackie survived the wilderness and made it back home, only for something else to happen to her. The way Jackie’s parents talk about her certainly makes it seem like she’s dead. Maybe there was a suicide (or an attempt that got her locked up in a psychiatric hospital). It’s also possible she came home and later faked her own demise to go into hiding rather than deal with the constant questions about what really happened out in the woods.

But if Jackie is alive, it may answer another question too: Who sent all those creepy postcards? And who murdered Travis? Could Jackie be back for revenge?