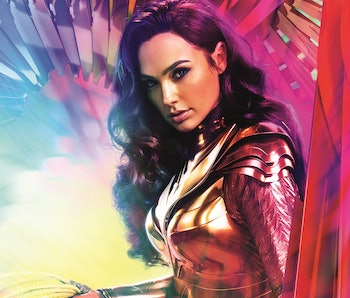 The next DC superhero movie, Wonder Woman 1984, is sure to contain a lot of secrets. But we may already know a handful of them if we look closely enough. In lieu of the movie's June release, Warner Bros. has released a few more images to sate fans' cravings. Here's what we know based on all the photos and taking a second look at the trailer released last December.

Over the past month, Warner Bros. has released a steady trickle of new photos of Wonder Woman 1984, the sequel to 2017's Wonder Woman. Originally scheduled to open in theaters on June 5, the Covid-19 pandemic has delayed the movie's opening weekend until August 12.

In 1984, Wonder Woman (Gal Gadot) finds a new challenge in two enemies ripped straight from her comic books: television huckster Maxwell Lord (Pedro Pascal) and archaeologist turned half-wildcat Cheetah (Kristen Wiig). Wonder Woman confronts these foes in the year 1984, in the twilight years of the Cold War. It's a change of pace from where we last saw her, in the middle of World War I, then known as "The Great War" and the "War to End All Wars."

5. Well, we know they're not friends – The trailer for Wonder Woman 1984 opens with Wonder Woman and Dr. Barbara Ann Minerva (Wiig) sharing friendly conversation over wine. It's girl's night! But based on the most revealing photo yet, we know that friendship won't last long.

In the photo, Wonder Woman has Barbara tied up with her lasso, the Lasso of Hestia (also known as the Lasso of Truth). Barbara is also dressed in a cheetah print outfit, suggesting she is somewhere halfway into her complete transformation as the villainous Cheetah. With the two former friends on opposite sides, we know that their friendship in the movie will not last. They're going to fight soon enough, and it's going to be devastating for Diana.

4. "We were born free"– One photo has two revelations. In one depicting Diana (out of her Wonder Woman costume and in a loose flight suit) and Steve Trevor (a returning Chris Pine), the two are somewhere in Almería in Andalusia, Spain. (Filming took place between September and October 2018.)

In the background, the following is written in Arabic and hung on a building. (A thank you to Inverse's own Passant Rabie for the translation.)

We were born free

This is a decision

We were created free

And we will die free

Almería has a very crucial place in Cold War history. In 1966, an American B-52 bomber carrying four hydrogen bombs, bombs more powerful than the ones dropped on Hiroshima and Nagasaki, crashed in Palomares in 1966. It took nearly 50 years for the United States to agree to clean up the radioactive site.

With Wonder Woman 1984 taking place in the same 20-plus year historical period that the incident occurred, it seems the movie may address many of the sins committed in the era.

3. An anachronistic Casio? – That last photo also provides a pretty good look at Steve Trevor's new Casio watch. As an American pilot from the early 20th century, watches play a big role in the life of Steve Trevor. But when Steve "comes back" in 1984 (we'll get into that in a bit), he's traded his pocket watch for something that rose in popularity in the 1980s: Casio's digital watches. The ubiquitous digital watch ushered in what horologists know as the "Quartz crisis," as the cheaper and more accurate quartz batteries threatened the more classic Swiss watchmaking industry.

The watch Steve wears in Wonder Woman 1984 is identified as a A168W (which you can still pick up for $25), which didn't hit the market until the 1990s. But its predecessor, the A152, was indeed released in 1984, evidenced by this Casio catalog from that year.

2. How is Steve Trevor even alive? – Previous photos released by Entertainment Weekly revealed what could be the Chaos Shard, a magical rock that allows anyone in its possession to have their wishes granted. (The rock was also seen in the trailer, in a blink-and-you-miss-it moment.) Is the Chaos Shard how Steve Trevor is alive in 1984?

The recent Wonder Woman 1984 photos show Steve Trevor is alive and well in 1984, decades after his heroic sacrifice. From his modern watch to his gobsmacked expression at what looks like the Smithsonian, Steve isn't just a figment of Diana's imagination. He's really back, and even he's surprised.

The Chaos Shard might explain how and why. If the rock grants the wish of those who wield it, does Wonder Woman come in contact with it and accidentally (or purposefully) wish Steve Trevor back? For now, that's a solid theory until we actually see the movie.

1. Battle in the White House – The Diana vs. Cheetah photo takes place inside the White House, evidenced by the red carpet, stone pillars and doors adorned by an American flag and the U.S. government seal.

While the general plot of Wonder Woman 1984 has yet to be revealed, we know that Wonder Woman's apparent war against war will take her to the epicenter of the Cold War: The U.S. government. Whether that means Maxwell Lord weasels his way to the seat of the Presidency (he's not the first TV personality to do so), or something else goes down, all we know is that it will require Wonder Woman to upgrade her arsenal with some sweet golden armor.

Wonder Woman 1984 will be released in theaters on August 12.

More like this
Culture
6.20.2022 12:00 PM
25 years ago, the worst Batman movie ruined the franchise — and inspired a modern trend
By Dais Johnston
Entertainment
6.29.2022 11:00 AM
Marvel leak reveals a groundbreaking new god in Black Panther 2
By Dais Johnston
Entertainment
6.29.2022 10:30 AM
25 years ago, Nic Cage made his most explosive sci-fi movie ever — it was almost even better
By Jake Kleinman
Related Tags
Share: