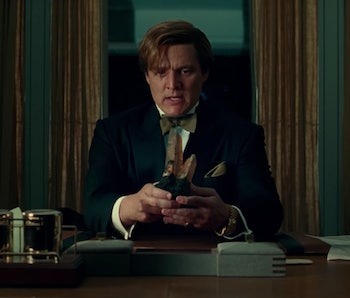 New images of Wonder Woman 1984 seem to emphasize a very crucial plot detail that may actually reveal how Steve Trevor returns from the dead. And it all has to do with a rock.

Comic book fans may recognize the rock as the Chaos Shard, a powerful relic from another reality that can grant a wish to whoever's reflection appears on the surface. It's also a pretty new invention, having made its comic book debut in 2013 in the pages of Batman/Superman by Greg Pak.

If the Shard has enough energy, the deepest desire of that person is granted. So you can see why someone like Maxwell Lord would want to hoard the Chaos Shard all to himself.

Other photos from EW aren't as revealing about the plot but they're no less fun. In one, Diana and Steve have a "date" in a fighter plane flying through fireworks, likely because it's the Fourth of July (which also happens to be the movie's theatrical release). Another picture shows Steve proudly rocking a fanny pack. Ah, the '80s.

A final picture shows Diana at the White House using her Lasso of Truth. If only we could have that tool for real in the real White House. Maybe we can wish it into existence using the Chaos Shard.