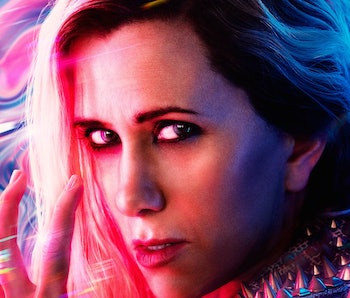 Maxwell Lord isn't the only villain in Wonder Woman 1984. In the 2020 sequel to 2017's Wonder Woman, one of Diana's most feared archenemies, Cheetah, comes to frightening life in an electric performance by Kristen Wiig. But this period superhero film makes a few key changes to the origin of Cheetah, one that strays from the comics.

Here's how Wonder Woman 1984 reimagines Cheetah in a new way for the DC Extended Universe.

Warning: Spoilers for Wonder Woman 1984 ahead.

And so, Maxwell grants her wish, turning her into Cheetah.

Cheetah is one of Wonder Woman's most notorious villains — the Joker to Wonder Woman's Batman. But Wonder Woman 1984 goes to some pretty great lengths to change Barbara and her origin story as Cheetah. Here's how different Cheetah's story is in Wonder Woman's comics.

Cheetah was the brainchild of Wonder Woman creator William Moulton Martson, an American psychologist also credited with co-creating the lie detector with his wife, Elizabeth Holloway. (Wonder Woman's "Lasso of Truth" is a comic book version of Martson's invention.) In addition to his work in psychology, Martson turned to comic books as a way to educate and inform young people on his studies about human behavior, as well as to champion women's rights.

Cheetah made her debut in comics in Wonder Woman #6. Marston intended Cheetah to be the embodiment of abnormal emotions, in particular jealousy. That's how he came up with the first Cheetah, a socialite named Priscilla Rich. After being upstaged by Wonder Woman in public, Priscilla's jealousy manifests into a half-human, half-cheetah when she looks in the mirror.

"Don't you know me? I am the real you — the cheetah — a treacherous, relentless huntress!" her reflection tells her. Cheetah then gives Priscilla the ability to turn into her and to "take your revenge" on Wonder Woman.

Decades later, in 1980, Priscilla Rich dies as Cheetah in Wonder Woman #274. Her death paves the way for the second Cheetah to take up the mantle: Priscilla's niece, Deborah "Debbie" Domaine, another affluent socialite. Unlike her aunt, Debbie regrets her wealthy upbringing and instead tries to become an ecology activist. She even meets and becomes Wonder Woman's friend — until Debbie is kidnapped by the villain Kobra, who brainwashes Debbie into continuing her aunt's legacy as Cheetah.

When DC Comics hit the reset button on its continuity after 1985's Crisis on Infinite Earths, both Priscilla and Debbie were written out of continuity to give way to the third and now most prolific Cheetah, Barbara Ann Minerva.

A British archaeologist born to (again) a wealthy family, Barbara's passion for archaeology leads her to a tribe in Africa, one protected by a guardian who has the powers of a cheetah. When marauders kill the guardian, the powers transfer to Barbara. The only problem is, the powers work best when given to a virgin. Because Barbara was not, the powers wind up cursing her: being in her human form is painful, while her cheetah form gives her an insatiable bloodlust. Cheetah's theme of jealousy continues in Barbara, who seeks Wonder Woman's Lasso of Truth.

In DC's history, Barbara is by far the most prolific Cheetah, remaining active to this day. She is re-imagined heavily in the 2011 New 52 reboot, this time as another Amazonian possessed by the Goddess of the Hunt. But In 2016's Rebirth, another major reboot of DC continuity, elements of Barbara's older origin was restored, again making her an archaeologist seeking proof of the Amazons' existence. She is recruited by a U.S. Navy SEAL, Steve Trevor, to communicate with Wonder Woman, who has just arrived in Man's Land and only speaks archaic, ancient Greek.

Long story short, the two become friends — until Minerva becomes obsessed with discovering Olympian deities. She winds up in the crosshairs of the sons of Ares, Deimos, and Phobos, who turn Barbara into a demigod. In Wonder Woman #18, Barbara becomes Cheetah.

While Barbara is still Cheetah in mainstream continuity, there was still one more Cheetah who briefly stole the powers: Sebastian Ballesteros, an Argentine business tycoon and the only man to ever become Cheetah. In 2001, Sebastian temporarily took the powers from Barbara — convincing the plant god Urzkartaga that a man would succeed where previously women have failed — until Minerva kills Sebastian and takes back her powers.

While the nitty-gritty details of Barbara's story in Wonder Woman 1984 divert from the comics (there are no plant gods or evil mirror reflections involved), there are actually quite a few recurring elements. In Wonder Woman 1984, Barbara is indeed envious of Diana's beauty, confidence, and power. That emotion drives Barbara throughout the movie, as Barbara's envy and infatuation with Diana slowly manifests into something sinister.

And like her comic book counterpart, Diana is indeed an expert archaeologist, which is how she comes in contact with the Dreamstone in the first place.

Though Wonder Woman 1984 takes a left turn from Barbara's story, much of William Moulton Marston's original intentions with the character remain intact, even now on HBO Max.

Wonder Woman 1984 is now in theaters and streaming on HBO Max.