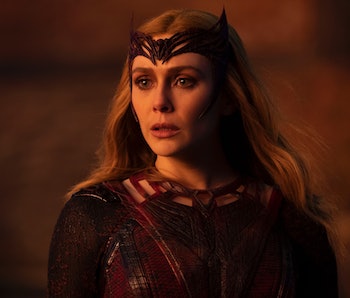 The arrival of a new hero to the Marvel Cinematic Universe could mean the return of another fan favorite. According to reports by both Deadline and ScreenGeek, Marvel Studios is “in talks” with Yahya Abdul-Mateen II to play Simon Williams (aka, Wonder Man) in a series project for Disney+ currently under development with Shang-Chi director Destin Daniel Cretton. It’s important to highlight that both outlets’ reporting indicates talks are ongoing, with nothing finalized yet.

Not to be confused with Wonder Woman at DC, Wonder Man is a recurring Avenger with an array of powers like super strength and speed, to a more narrow specialty of “ionic energy.” What’s especially interesting about Simon is how often he’s come back from the dead, his side career as a Hollywood movie star, and his on-again, off-again romance with Wanda (aka, Scarlet Witch), played by Elizabeth Olsen in the Marvel franchise.

While Wanda is usually paired with the synthetic Vision, their relationship is actually rooted in Simon Williams, who harbors his own feelings for Wanda. When Simon’s brain patterns were used to create Vision, his attraction to Wanda influenced Vision’s own.

While the Marvel Cinematic Universe has played out differently than the comics, all signs point to Elizabeth Olsen’s Wanda making a possible return. While Wanda met her fate at the end of Doctor Strange in the Multiverse of Madness, the flexible multiverse premise now predominant in the MCU opens an easy creative path for actors to return.

In addition to Wonder Man for Disney+ is another related project. Actor Paul Bettany is set to star in Vision Quest, which will continue the story of “White Vision” from the end of last year’s WandaVision. As reported by Deadline, Olsen’s presence is a possibility, even if it’s a cameo. While the future of Wanda in the MCU is unclear, that there are two Marvel shows centered on her biggest paramours in comics indicates Olsen mustn't be far from the MCU.

As for Wonder Man himself, Yahya Abdul-Mateen II is an exciting actor with already a few genre roles in his resume. The actor played the villainous Black Manta in DC’s 2018 hit Aquaman (and will return in Aquaman and the Lost Kingdom). He was also the reincarnated Doctor Manhattan in the award-winning HBO series Watchmen. Last year, he played a new version of the sage Morpheus in The Matrix Resurrections.

While Wonder Man isn’t a mainstream figure like Spider-Man, he has plenty of potential as both a formidable hero to battle Kang (in the coming Avengers: The Kang Dynasty) and a spicy personality to allow a diversity of creative tones. Wonder Man’s comics have been both comedic and somber, with his heartache for Wanda central to his personal drive. His television series could be the same, with the humor of a superhero being a struggling actor as well as the pain of unrequited love. And like his comics, he may very well wind up dead. But for Wonder Man, that’s just a new beginning.

There is no release date for Wonder Man on Disney+.