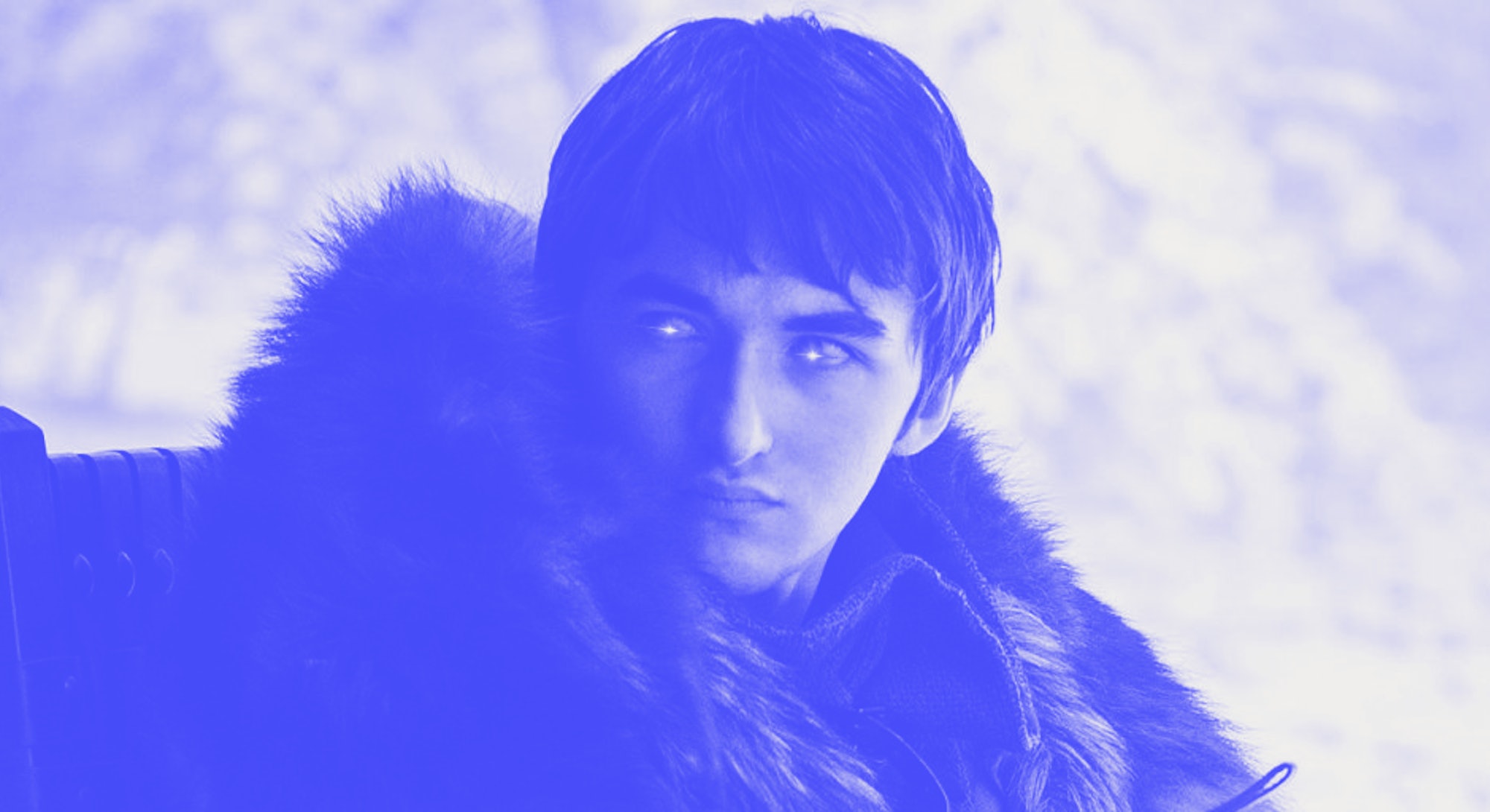 Far beyond the Wall, deep in the haunted forest, there lies a cave.

Inside that cave is an abomination: a monster, part man and part weirwood, that can see and perhaps even control the present, past, and future. This creature, the three-eyed crow, is allied with the ancient magic of the children of the forest. It cares little for humanity and may seek to destroy it altogether. The creature is old and weak, but it has a protege, a young boy whose awakening into evil will, at last, bring the Long Night to Westeros: Bran Stark.

This story may not feel entirely familiar to lovers of HBO's Game of Thrones or A Song of Ice and Fire. Bran has been a heroic and earnest child since the first book, and seemingly wants to use his prophetic powers for good. And there's good reason to suspect George R. R. Martin's continuation of the story will go that way, given that the novelist told showrunners David Benioff and D.B. Weiss his loose plan for the saga's ending.

But Martin loves to defy expectations, and a select group of fans have developed a complex, spellbinding theory that Winds of Winter will reveal the three-eyed crow and Bran to be the ultimate villains of the series: the Great Other, the force of darkness that only Azor Ahai reborn can vanquish.

None but GRRM can say whether the theory will come true, but one thing’s certain: although it occasionally stretches the bounds of plausibility, the theory is an extremely entertaining and entirely unique viewpoint on the true role of the three-eyed crow.

The Three-Eyed Crow is a dangerous master

Those who believe Bran will become the show’s ultimate villain pin their theory on three things:

As Daenerys Targaryen becomes the champion of fire, Bran will become the champion of ice, and her implacable enemy. After all, unlike the show, the books haven’t revealed a single force like the Night King that controls the Others. That character was unique to the HBO series. The role of “ultimate villain” is still up for grabs, and theories abound about who will fill it, from Bran to Euron Greyjoy to Daenerys to no one at all.

The nature and identity of the three-eyed crow (three-eyed raven in the show), also known as the last greenseer, adds significantly to the possibility that Bran will take a dark turn. Bran has seen visions from the three-eyed crow ever since his fall, and finally meets him far beyond the Wall in A Dance with Dragons. The last greenseer is a decrepit man with one eye, dressed in rotting Night’s Watch clothes and intertwined with a weirwood. The two have become one. The books haven’t yet stated explicitly who this figure is, but they leave plenty of contextual clues that make it clear that the last greenseer was once a mortal man, a man named Brynden Rivers… or, more ominously, Bloodraven.

Bloodraven and Bran are on a collision course with Daenerys.

Bloodraven was a bastard, the illegitimate son of King Aegon VI of House Targaryen and Melissa Blackwood. The Blackwoods are one of the oldest houses in Westeros; they are descended from the First Men, were once kings in the riverlands, and are one of the only southern houses to keep the old gods of the North. Bloodraven, an albino, was born with a birthmark vaguely shaped like a raven. He lost an eye during the Blackfyre Rebellion and eventually became Hand of the King, where he gained a reputation for being both a spymaster and a powerful sorcerer, a man with “a thousand eyes and one.” Eventually, he is forced to take the black and becomes Lord Commander of the Night’s Watch.

About 50 years before the beginning of Game of Thrones, he disappeared in the haunted forest north of the Wall and was never seen again… until Bran found him. Bloodraven, the most feared sorcerer in the realm, had become the three-eyed crow.

The exact nature of a greenseer’s powers are nebulous. It is certain they can see through the eyes of birds, and use weirwoods to see the past, present, and future. They can send dreams and visions to select people. But it may extend much further than that. In the show, when Bran awakens as the greenseer, he essentially gains ultimate knowledge of everything that has happened in Westeros. Based on the famous "hold the door" incident, he may even have a degree of influence over events. And he has a deep connection both to humanity and to the children of the forest and other ancient things.

In A Dance with Dragons, Melisandre sees a vision in her flames of a corpse-white wooden face surrounded by a thousand red eyes, next to a boy with a wolf’s head--undoubtedly a vision of Bloodraven and Bran. She believes this vision to be a look at the Great Other’s champions, whom the prince that was promised will eventually have to face. Melisandre incorrectly believes Stannis to be humanity’s salvation, so her powers of prophecy are not always totally on the mark, but it is nevertheless clear that the three-eyed crow is tightly linked to dark powers. Bloodraven openly admits it:

“There [Bran] sat, listening to the hoarse whispers of his teacher. 'Never fear the darkness, Bran.' The lord's words were accompanied by a faint rustling of wood and leaf, a slight twisting of his head. "The strongest trees are rooted in the dark places of the earth. Darkness will be your cloak, your shield, your mother's milk. Darkness will make you strong."

Nothing ominous about that.

The Children of the Forest and the Others

Nobody’s going to deny that the three-eyed crow is a creepy dude, but a vociferous segment of fans believe his true intentions are deeply nefarious, and that Bran Stark will willingly work toward the same goals. Bloodraven’s power is tied to the children of the forest--in some ways, he is a hybrid of a human and a weirwood, endowed with the magic children.

Hints throughout Bran’s chapters in A Dance with Dragons suggest the children of the forest are not as innocent as they seem. The cave they live in is filled with thousands of skeletons of their own kind, dead humans, and even dead greenseers. Though the children fight off wights who try to enter their cave, their true relationship with the Others is unknown.

The role of “ultimate villain” is still up for grabs.

The show suggests that the children created them deliberately to try to drive humans from Westeros thousands of years ago. Even if the books take a different path, the children of the forest are fundamentally not human. Their interests are not aligned with what’s good for the Seven Kingdoms, or for Bran. When he embraces the mantle of their powers, he too may set aside the good of individual humans for the benefit of humanity as a whole.

Bran’s powers as a greenseer start to awaken when the children feed him a substance called “weirwood paste,” which unlocks his ability to see into the past and warg into humans, weirwood trees, and pretty much anything he wants. Troublingly, there’s evidence that “weirwood paste” is actually so-called Jojen paste, a sap made from the blood of Bran’s dying companion Jojen Reed, fed to Bran in a cannibalistic ritual. According to this theory, the children, Bloodraven, and Coldhands worked very hard to deceive Bran into eating human flesh, for only such a macabre ritual could truly awaken his powers.

Adherents of the theory have varying interpretations of Bloodraven’s motivation and the extent of his evil. Those differing views influence what role they predict Bran will play in Winds of Winter.

Bloodraven, in life, was a brutal spymaster who tried to rule Westeros as an almost-authoritarian state to protect his family. Some think he’s now doing the same thing, magically manipulating events for an unknown purpose… perhaps to stop the Others, or use them to invade Westeros and force the Seven Kingdoms to come together against a common enemy. Bloodraven’s unseen hand, or Bran’s, may have influenced events throughout the series, like Aerys II going mad, which led to Robert’s Rebellion and Daenerys’s rise. He may even have caused Bran’s leg-shattering fall. In this view, Bloodraven is a figure who does try to protect Westeros, but doesn’t care about the personal cost… and he’s recruiting Bran to do the same thing.

Others argue Bloodraven truly is the Great Other, the avatar of the ancient magic that was banished in the Pact, and needs a young protege to take on his mantle. This ties in closely with the popular idea that Bran would be revealed as the Night King in the HBO show, using his power for evil ends, intentionally or not. Although that didn’t come to pass, the logic behind it seemed plausible, and the books may still go there. Some fans suggest the three-eyed crow will warg into Bran, taking over his spirit while leaving his body alive. Much like the children of the forest’s cave, the rabbit hole of Bloodraven theories goes as deep as you want it to go. We know GRRM loves breaking traditional genre norms, so even the unlikeliest ideas could have some truth (or solid entertainment value) to them.

Is Bran the Night King?

Regardless of their motivations, Bloodraven and Bran are on a collision course with Daenerys. They represent opposite polarities in the world of ice and fire. Bran and Bloodraven are the power of the weirwoods, the old gods, darkness and what lies beyond the Wall. Even if they ultimately oppose the Others, they do so through old and cold magic of darkness. Daenerys and her dragons, on the other hand, are the embodiment of the power of the Lord of Light.

If the prophecies of Azor Ahai and the prince that was promised are true, only one of those two forces can ultimately survive the Long Night. Bran seems like an innocent boy, and it’s hard to imagine him becoming the villain. But he too has a dark side, which becomes apparent when he continues to warg into Hodor against his will, and he’s fallen in with a very dangerous character. The three-eyed crow is perhaps the most powerful, or at least most knowledgeable, entity in Westeros, and his motivations range from gray to downright malevolent. Bran may follow in his footsteps, regardless of the cost.

There’s one final piece that gives credence to the theory. When Game of Thrones Season 8 ended, the Iron Throne itself was gone… and yet it is Bran Stark who becomes king. You know, the same guy who can see the past and the future, has a subtle power to manipulate events over the course of decades or centuries, and is imbued with strange and ancient magics. We may not know for years whether Bran is evil or not, or if the books also end with Bran on the throne… but if he does, good or evil, the three-eyed crow is the ultimate and final winner of the Game of Thrones.

Winds of Winter does not yet have a release date.