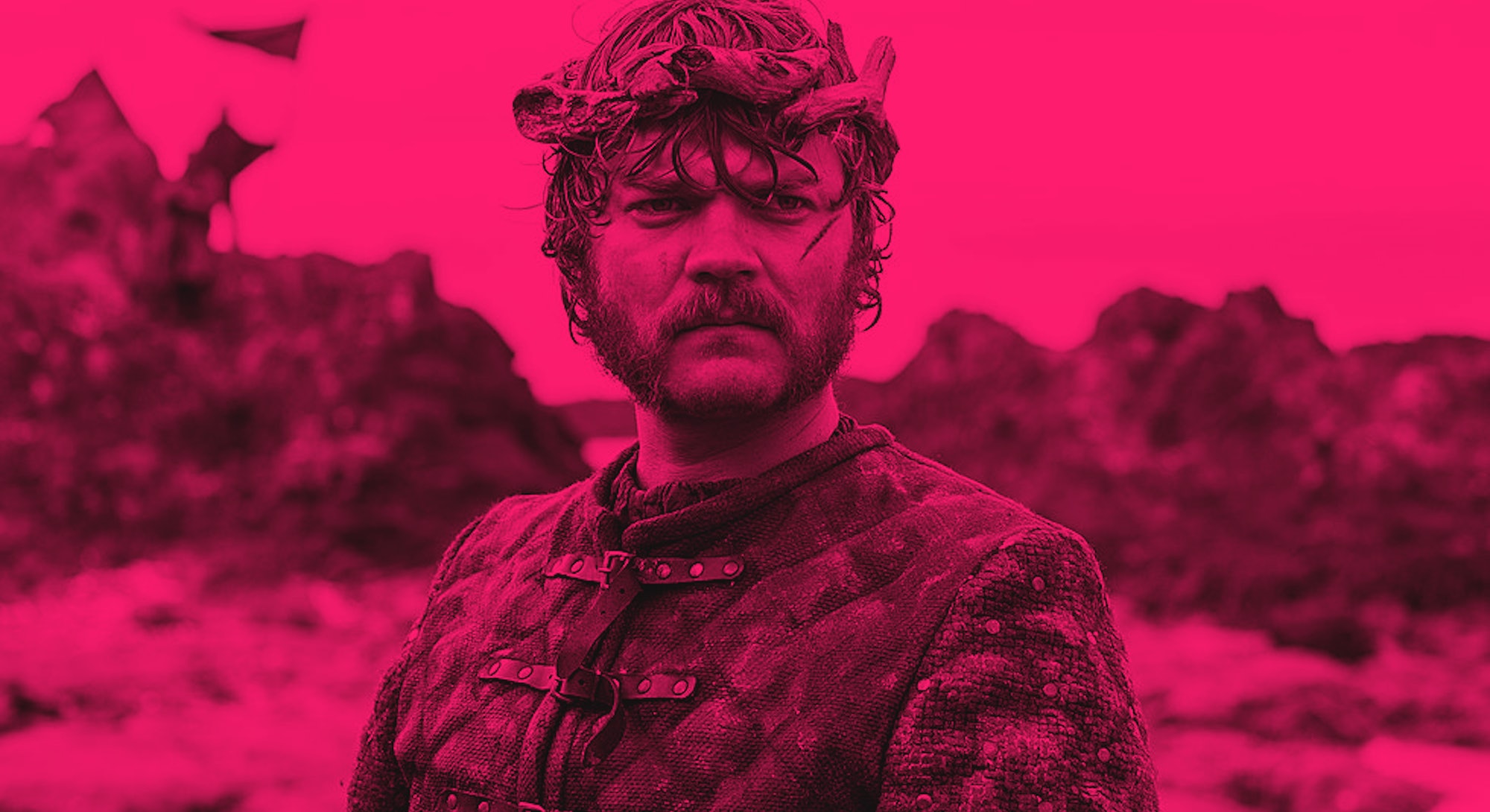 Euron is one of the most enigmatic characters in "A Song of Ice and Fire," and his long-term role in Winds of Winter (and beyond) is shrouded in mystery.

At first glance, and in HBO's Game of Thrones show, he seems like nothing more than another cunning and vicious Greyjoy, bent on power and conquest. But the books clearly establish that there’s more to his story. He is, in one way or another, deeply involved in the lost, dark magic of Westeros and Essos, more than anyone else besides Daenerys, Bran, and Melisandre.

The nature of that magic is the heart of what has become known as the “Eldritch Apocalypse” fan theory –the idea that Euron is going to awaken the ancient things that live in the deep, destroy Oldtown, the Wall, and possibly the whole world, and even steal one of Dany’s dragons.

The Eldritch Apocalypse theory is a little convoluted, and it helps to have a good working knowledge of the books. That’s because this theory is based on real, textual evidence in the books, albeit evidence that is interpreted in a very particular and occasionally tenuous way, and it relies on close readings of the novels to predict what will come ahead. We won’t know if they’re right until the Winds of Winter release date, but until then, it’s a fascinating look into the endgame of A Song of Ice and Fire.

First, a quick refresher on Euron “Crow’s Eye” Greyjoy and his recent activities. He’s the younger brother of Balon Greyjoy, Head of House Greyjoy and Lord of the Iron Islands. Euron wears an eye patch over his left eye, concealing what Theon calls “a black eye shining with malice.” (Hence the nickname Crow’s Eye.) He also has blue lips because he regularly drinks nightshade, definitely a totally normal thing to do. But enough judging the man for his appearance. Let’s judge him for his actions instead.

Before the timeframe of the books, Euron encouraged his brother Balon to start the Greyjoy Rebellion, which ended in ignominious defeat. He was banished sometime after the war for seducing his brother Victarion’s wife, and told never to return while Balon was alive. He didn’t, and instead spent the next decade or so reaving all around the world. He has supposedly traveled to both Asshai by the Shadow, the most feared, ominous and magical land in the known world, and to the smoking ruins of Valyria. And then, in A Storm of Swords, Euron popped up again in the Iron Islands literally the day after King Balon fell off a bridge during a storm, under very mysterious circumstances (Subtext alert: Sure seems like Euron killed his brother… probably by hiring a Faceless Man).

It’s hard to deny that Euron is up to something strange.

But now’s where we get into the weird stuff. According to Euron’s entry in the worldbook A World of Ice and Fire, Euron captured four warlocks on his travels, including Daenerys’s old friend Pyat Pree. He also seized a legendary dragon horn, Dragonbinder, from the ruins of Valyria. Since his return, Euron won the kingsmoot to become the ironborn’s new king, and he’s promised to conquer Westeros for them… in part using that horn, which he believes can take control of one of Daenerys’s dragons. Hence the name “Dragonbinder.” His brother Victarion now has the horn, and is sailing to Meereen with the Iron Fleet to find Daenerys. Meanwhile, Euron himself is waging a war of conquest across the Reach, and heading straight for Oldtown.

That’s what we know for sure, based on the first five books. Clearly Euron has plans, and magic at his back. But that magic might be much more complex than it seems.

Euron Greyjoy and the Eldritch Apocalypse

Let’s be totally clear: we’re getting into speculative territory here, and also taking into account some preview chapters from Winds of Winter (which both contain spoilers and may have changed since they were last read or published). In its simplest form, the Eldritch Apocalypse theory states that Euron Greyjoy is going to make himself the master of both Ice and Fire… AND the power of the deep, a third form of magic that has only been hinted at. In the process, Euron may become the main antagonist in the books, a supernatural avatar of dark magic, and fill a role similar to the Night King in the show.

The Eldritch Apocalypse theory was first articulated by A Song of Ice and Fire blogger Poor Quentyn. It accepts that Euron will steal a dragon, but goes much further, and hinges on what happens when Euron gets to Oldtown. In the books, Samwell Tarly is still training to be a maester, and more importantly, he is still holding onto a certain relic from Beyond the Wall: an ancient, unadorned horn, which he found with a cache of dragonglass at the Fist of the First Men. The books hint that this horn could be the legendary Horn of Joramun, prophesied to bring down the Wall. Remember the one Mance Rayder claimed to have? Mance has admitted that was a fake. And with the real horn in Oldtown and Euron, the ultimate agent of chaos, on the way, it’s not that much of a stretch to suppose that he’s going to take it. Then, of course, he'll blow it, probably from the top of the Hightower, where you can see all the way to the Wall on a clear day. With that, the Wall will fall.

As for the third form of magic… that’s more complicated. It’s also the wildest part of the Eldritch Apocalypse theory, and it comes back to the Horn of Joramun, the Wall, and much more obscure textual evidence. The Wall is magical down to its bones, and it is more than just a physical barrier. The Wall keeps magic out of Westeros, and when it falls, that magic will rise again. The Others will come south, yes, but other long-dormant magic will also awaken.

The Deep Ones and the Secrets of the Seas

Here’s a fun fact: the Hightower in Oldtown is built atop an ancient fortress of unknown origins, made out of a fused black stone. The Seastone Chair, the kraken-shaped throne of the Iron Islands, is made out of a similar oily black stone. A World of Ice and Fire cites a long-dead maester, Theron, who believed that the ancient fortress, the chair, and other strange black stones throughout the world were actually created by a race called the Deep Ones, “a queer, misshapen race of half-men sired by creatures of the salt seas upon human women.” And that’s not the only rumor of merpeople/mermonsters in A Song of Ice and Fire. The people of the Thousand Islands, far to the east, worship fish-headed gods. Krakens have also been seen increasingly often off the coast of Westeros.

Patchface, Stannis’s fool, also seems to know the secrets of the sea. Patchface survived the shipwreck that killed Stannis’s father, but he disappeared into the seas for three days, and no one knows how he survived. Ever since, he has been at least half-mad, spouting frightening riddles about the merfolk who live under the sea. In A Dance with Dragons, Melisandre reveals that she sees him in her prophecies and considers him very dangerous.

Of course, the legends of the Drowned God, the god of the ironborn since time immemorial, also play in here. Maester Theron’s book on the Deep Ones suggests the Drowned God was real, and one of the fathers of their race. Moqorro, the red priest who is traveling with Victarion, states a simpler theory in Dance: “Your Drowned God is a demon, he is no more than a thrall of the Other, the dark god whose name must not be spoken.”

The Eldritch Apocalypse theory, at its heart, posits that the Drowned God and the Deep Ones are real… and that Euron will bring them out of the deep, making himself their avatar in the process. The old, dark magic shall reawaken in him. His goal is simply chaos and conquest, destruction for its own sake. If the theory proves correct, Euron will become the chief antagonist to Bran and Daenerys in A Dream of Spring, with their magic pitted against his while Jon Snow and co. wage a more conventional war against the Others with military force (and lots of dragonglass).

It’s easy to forget that, in the books, there is no Night King, at least not yet. The show created the character, and the books don’t yet have one single antagonist leading the forces of darkness. The Eldritch Apocalypse theory posits that Euron will become that antagonist.

This may seem like a stretch… and, like most A Song of Ice and Fire theories, the rabbit hole can go pretty deep. Some proponents of the theory suggest that Euron is an agent of Bloodraven, the last greenseer. Others dive more deeply into the hints of a deep, dark magic within Oldtown itself. And George R. R. Martin is a tricksy fellow full of surprises.

Even if the theories seem over-the top, it’s worth bearing in mind that the existence of the Others and the children of the forest are just a legend, a child’s bedtime story, to almost all the people of Westeros. So are krakens and merpeople. The denizens of the deep could end up being just as real as the horrors from Beyond the Wall. It’s hard to deny that Euron is up to something strange. With a horn to bind dragons, a strong and clear interest in magic, and easy access to a horn that may destroy the Wall, the new king of the ironborn is certain to be a formidable foe for Daenerys.

But just read this (spoilery!) quote, from a preview chapter of Winds of Winter, where Aeron Damphair sees a vision of Euron, and try to say that the Eldritch Apocalypse theory is completely ridiculous:

When he laughed his face sloughed off and the priest saw that it was not Urri but Euron, the smiling eye hidden. He showed the world his blood eye now, dark and terrible. Clad head to heel in scale as dark as onyx, he sat upon a mound of blackened skulls as dwarfs capered round his feet and a forest burned behind him.

“The bleeding star bespoke the end,” he said to Aeron. “These are the last days, when the world shall be broken and remade. A new god shall be born from the graves and charnel pits.”

Then Euron lifted a great horn to his lips and blew, and dragons and krakens and sphinxes came at his command and bowed before him. “Kneel, brother,” the Crow’s Eye commanded. “I am your king, I am your god. Worship me, and I will raise you up to be my priest.”

Winds of Winter does not yet have an official release date.