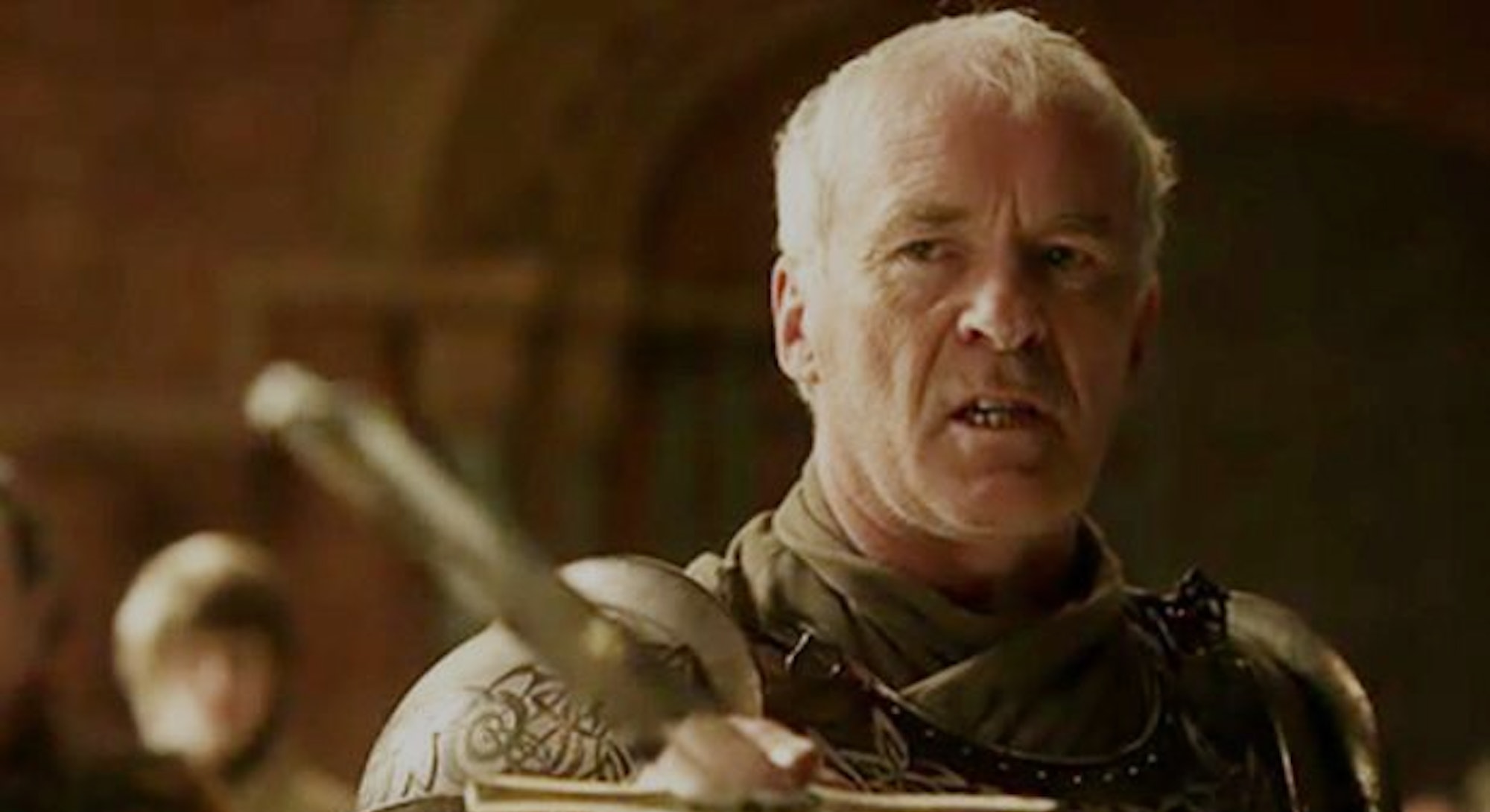 One of those warnings came in the show’s fifth season with the death of Ser Barristan Selmy, the first and most precious canary to suffocate in the stinking air of David Benioff and D.B. Weiss’ narrative shortcuts. But there’s reason to believe the former Kingsguard will find redemption in the pages of George R.R. Martin’s next A Song of Ice and Fire novel, The Winds of Winter — whenever it finally releases.

The revered Commander of the Kingsguard, who was fired by the Lannisters and pledged his support to Daenerys in response, died anticlimactically in the Season 5 episode “Sons of the Harpy” when he was overwhelmed and mortally wounded by a gang of slavers in gold masks. He died unremarkably, having succeeded only in warning Daenerys against the violent excesses of her father, the Mad King.

As he is in A Dance with Dragons, Selmy will be a point-of-view character in The Winds of Winter. We know this because Martin read two Barristan chapters aloud at the 2013 Boskone science fiction convention in Boston and one of these chapters is now more widely available.

The first Barristan sample chapter opens with Yunkish trebuchets — the “Six Sisters” introduced in A Dance of Dragons — throwing infected, rotten corpses over the city walls of Meereen as Barristan Selmy surveys the troops rallied to Daenerys’ banner. There’s just one problem: Daenerys left the city on Drogon’s back after a riot in the fighting pits.

In relation to Game of Thrones, this places Selmy’s Winds of Winter chapter somewhere after the Sons of the Harpy’s attack on Daznak’s Pit in Season 5, but before her triumphant Season 6 return to the city on Drogon’s back. That’s a span of time well after Selmy’s death on the show, but in The Winds of Winter, it’s Selmy who leads the charge out of the gates of Meereen against the assembled forces of Yunkai and the other slaver cities.

Martin has been building to the Battle of Slaver’s Bay throughout A Dance with Dragons, arraying besieging forces outside the walls of Meereen and the Sons of the Harpy within. The coming battle is the culmination of political machinations spun up throughout the previous book — including wrinkles like a bowl of poisoned honey locusts — and exactly the kind of widescreen action HBO’s Game of Thrones would typically reserve for each season’s penultimate episode. However, the HBO series deflated Daenerys’ last stand in Essos, neatly wrapping up all the Meereenese complications (and chopping Martin’s “Meereenese Knot”) at the beginning of Season 6 episode “Battle of the Bastards” by burning the slave masters at a parley.

But rather than a conclave of elites, The Winds of Winter is setting up a ground-level fight, with Selmy leading a ragtag army of mercenaries, squires, Unsullied and pit fighters into battle against the Yunkai’i and their Slaver’s Bay allies.

“Whatever might befall us on the battlefield, remember, it has happened before, and to better men than you,” Selmy tells his squires in The Winds of Winter, before leading the charge out the gates. “You may retch. You will not be the first. You may drop your sword, your shield, your lance. Others have done the same.” (Inspiring stuff! Too bad Game of Thrones killed him in Season 5 of he could have come in handy in the fight against the Night King...)

An important POV in Winds of Winter

But it’s not just that Barristan Selmy will fight in a major battle, instead of dying in an alleyway, that separates Game of Thrones from A Song of Ice and Fire. The Meereen of the HBO series often manifested in the throne room, where Daenerys or Tyrion would meet with supplicant citizens representing the requests and complaints of the masses she now ruled who largely went unseen. By comparison, in The Winds of Winter, Martin has the freedom to embrace the sprawl of Meereen through the eyes of Selmy.

Those reading Winds of Winter’s sample chapters who may not have picked up an Ice and Fire novel for years will quickly be reminded of Martin’s strengths and their potential to uplift events skimmed over by Game of Thrones.

Above and beyond his fondness for describing clothes (in the sample chapter, Selmy has donned white “enameled steel” with gold piping and a cloak the color of “winter snow”), Martin is simply a master of proper nouns generally, building out factions, mercenary companies and armies. Joining the Unsullied are Jokin’s archers, the Windblown, Stormcrows, the Brazen Beasts, Stalwart Shields, Free Brothers and Mother’s Men. The overwhelming number of named characters—The Widower, Tal Toraq, Fearless Ithoke, Senerra She-Snake, Togosh, Marrigo, Marselen, the Tattered Prince, Symon Stripeback, Orlos the Catamite, Goghor the Giant, the Brindled Butcher, Tumco Lho and the Red Lamb—is another reminder of the saga’s strengths, that the TV adaptation was only ever able to palely imitate. (There’s also a huge battering ram called Joso’s Cock.)

To read the sample Barristan POV chapter, download the free A World of Ice and Fire app for iOS or Android (you won’t find it in the similarly titled The World of Ice & Fire) and look for “Excerpts” in the “More” submenu. It can also be found in the back of paperback editions of A Dance with Dragons. It’s one of several chapters from The Winds of Winter available, both in the app and online. The second Barristan chapter, which follows Selmy into battle, has not been released publicly.

Winds of Winter can't fix everything...

What is true for Selmy is certainly true for A Song of Ice and Fire. Since Martin often speaks about Westeros as if its history is already written (thousands of years of it has fallen out of him in books like Fire & Blood), it is hard to imagine the possibility of a substantially different ending to his saga. In fact, he has explicitly repudiated.

We are, in all likelihood, still heading toward Mad Queen Daenerys. But Barristan’s Winds of Winter chapters convey how Martin’s telling differs in essence, even when substance remains similar.

“How will it all end? I hear people asking. The same ending as the show? Different? Well… yes. And no. And yes. And no,” GRRM said, writing on his blog the day after the Game of Thrones finale. “I am working in a different medium than David and Dan, never forget.” (He also promised unicorns, “of a sort.”)

There will be many characters and events in The Winds of Winter and A Dream of Spring that weren’t seen in Game of Thrones—Martin named “Jeyne Poole, Lady Stoneheart, Penny and her pig, Skahaz Shavepate, Arianne Martell, Darkstar, Victarion Greyjoy, Garlan the Gallant and Aegon VI.” But there will be just as many characters whose fates we know, but have not heard properly told. If Daenerys must go mad, if Jon Snow must kill her, if Bran the Broken must become king, then Martin is the one to do it. It might even make sense this time.