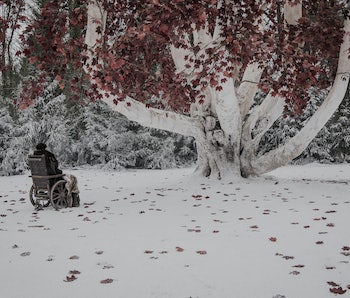 Since Game of Thrones’ beginning, everybody’s been talking about the Old Gods and the New. The High Sparrow and other High Septons preach the Faith of the Seven (the “New” gods), but the Old Gods worshipped by Northern houses like the Starks tap into the deeper, more ancient magic of the world. The Children of the Forest, the Three-Eyed Raven, weirwood trees, Godswoods, and yes, even the Night King are all connected to the magic of Westeros’ natural world and the Old Gods of the Forest. And then there’s the Lord of Light (basically, monotheism).

Yeah, religion is weird in Westeros.

Map: Here’s where all your favorite characters will be during the Great Battle of Winterfell.

With the Great Battle of Winterfell coming up and only three more episodes after that, Godswoods and the weirwood trees could become increasingly important leading into to the Game of Thrones series finale. After else, how else can you defeat the Night King but with magic of some kind?

What Are Weirwood Trees on Game of Thrones?

Weirwoods are a deciduous tree found throughout Westeros with white bark and blood-red leaves. They live for an extraordinary amount of time and have supernatural properties. All weirwood trees seemingly tap into a magical network running through the world and are connected in some way to the Old Gods of the Forest.

The Children of the Forest seemingly marked the most important weirwood trees for this reason. Before Bran Stark became the Three-Eyed Raven, touching one could trigger prophetic visions of the future. For both he and Jojen Reed, the trees would show them what they’d seen of the world.

As the Three-Eyed Raven, Bran Stark can theoretically perceive anything observed by any weirwood tree in the world at any point in time, but he can also warg into any living creature. That helps explain why he acts so weird all the time, right?

What Are Heart Trees on Game of Thrones?

When the Children of the Forest deemed a weirwood tree special enough, they carved a face into its bark meant to be physical manifestation of a Forest God. Referred to as “heart trees,” these special trees became sacred places of worship for followers of the Old Gods, namely the Children and the First Men. In one sense, heart trees are the Old Gods.

In their entire class, Jon and Sam are the only Night’s Watch inductees to take oath under a Heart Tree north of the Wall, which speaks to how few people still worship the Old Gods. The fact that it’s located north of the Wall makes venturing to it considerably dangerous.

What Are Godswoods on Game of Thrones?

When the First Men invaded Westeros, they started a war with the Children of the Forest that led to the creation of the Night King. Both sides were then forced to fight the Night King together, and after they won, the First Men agreed to worship the Old Gods as part of the peace treaty. As such, every major castle and settlement in Westeros is built around a weirwood tree, and the shrine-like area surrounding it is called a godswood.

Even King’s Landing has a godswood, but when the Andals invaded Westeros thousands of years later, they cut down many weirwood trees as they spread the Faith of the Seven and established the High Septon. The Andals weren’t able to defeat the First Men that held the North, however, which is why most Northern castles like Winterfell still have an active godswood. (It would take a few thousand more years before the Targaryens left Valyria and invaded Westeros to establish the unified Seven Kingdoms.)

In all cases, a godswood remains some kind of intensely sacred ground, but they have great importance in places like Winterfell.

How Does It All Connect to Game of Thrones Season 8?

Should the army of the living lose the Great Battle of Winterfell, they do have a slightly apocalyptic option they can use as a last-ditch effort.

We’ve never seen it on the show, but there’s a magical island called the Isle of Faces in the middle of a mystical lake just northwest of King’s Landing. Jojen and Meera Reed’s father, Howland Reed, is supposedly a greenseer that spent a long time in the mystical place before eventually traveling with Ned Stark to the Tower of Joy, where he was instrumental in rescuing baby Jon Snow.

Some people, like redditor u/zyuko22, have theorized that some kind of “Grand Weirwood Tree” exists at the Isle of Faces as the source of all magic. If it does exist, then in theory, destroying something like a Grand Weirwood Tree would eliminate the magic of the Old Gods from the world entirely. The theory adds that Beric burning the spiral symbol at Last Hearth in Episode 2 may have foreshadowed the destruction of the entire magical network of weirwood trees by burning the central source.

This could potentially be the key to defeating the Night King and destroying his entire undead army, but it would probably also destroy the Three-Eyed Raven in the process. Both seemingly draw their magic from the Old Gods, so it might be up to Sam to preserve the memory of the world in book form at the Citadel in Oldtown instead.

However, u/zyuko22 goes one step further to theorize that all magic comes from the same source.

“The Lord of Light is synonymous with the Grand Weirwood, and uses these weirwoods as a beacon to communicate with the physical world,” they write. “In other words, I think even though these are two separately practiced religions, the god at the center of both is the same entity.”

If this were the case, then destroying the Grand Weirwood would also kill Lady Melisandre, Beric Dondarrion, and even Jon Snow. Maybe even Daenerys Targaryen’s dragons.

Wouldn’t that make for an epic and totally tragic finale?