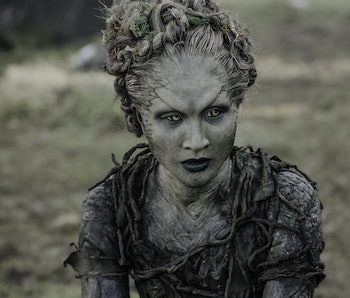 The most recent Game of Thrones episode gave us quite a few mind-blowing moments on several levels: There was the Hodor reveal and its implications about Bran’s ability to reach through time; there was the writers demonstrating that they finally learned how to deal with the aftermath of rape; and the shocking revelation that Sansa is the world’s fastest seamstress. (Seriously, how did she have time to make his-and-hers Stark Avengers cloaks during her brief sojourn at Castle Black?)

But the revelation about the origin of the White Walkers is the most intriguing of all, simply because we still don’t quite know what it means. It’s fascinating that the Children of the Forest made them out of humans as a weapon against humans — but we still don’t know a great deal about The Children of The Forest.

To contextualize this revelation and how it affects the larger narrative, we need to know more about the Children of the Forest. What’s the deal with these little leaf-people and their fire-bombs, what do they want, and why are their plans so poorly thought out (they really couldn’t see how creating an army of ice-zombies would backfire?)

George R. R. Martin has said Game of Thrones is largely inspired by Lord of The Rings. Think of the Children of the Forest as a mixture of hobbits and elves, then, with a dash of ents thrown in. Remember those tree-people Merry and Pippin bumble their way into befriending?

The Children a non-human race that preceded men by 12,000 years. Most humans believe them to be creatures of myth or long-extinct.

Like hobbits, they’re tiny with childlike proportions and dwell in hills, caves, or otherwise dark and cozy spaces. Like elves, they have mystical magical qualities. They’re responsible for the heart trees — the faces carved into Weirwood trees, and their wise men have the ability to peek into the past and future through greensight, which is what Bran has been learning from the Three-eyed raven.

So, possibility number one is that Bran is destined to become their leader. If they created the White Walkers, perhaps he’d then wield the ability to control them. That would be rather significant in the wars to come.

The confusing part of their history with the White Walkers is that, not only is creating an army of ice zombies a terrible idea that’s destined to backfire — but it backfired pretty much right away. Many humans think The Children never truly existed in part because their numbers have been so reduced by the White Walkers. They were at relative peace with the First Men before the White Walkers marched in and wreaked icy havoc.

But perhaps the Children’s plan is more Machiavellian than they get credit for. Intriguingly, because of the common threat of the White Walkers, the Children allied with the first Men to build The Wall. And guess who helped them build it? House Stark founder and Winterfell builder [Bran the Builder](http://gameofthrones.wikia.com/wiki/BrandonStark(the_Builder).

Possibility number two then is that, thanks to the new time-fuckery Bran’s story has dipped into with Hodor, perhaps Bran’s connection to his ancestor Bran The Builder goes beyond a simple shared namesake.

Going forward, there will most likely be more revelations about their true nature, as Isaac Hempstead-Wright told us that all season, “we’re certainly going to get a look into the mystical other side of Westeros than we’ve seen before.” The Children of the Forest might be mysterious, but they will have their part to play in the wars to come.