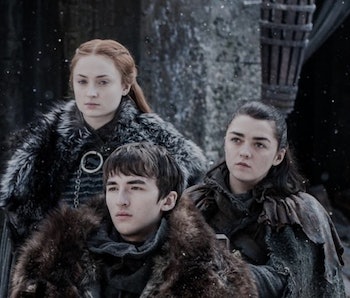 Keeping tabs on Bran Stark’s endgame for Game of Thrones during Season 8 has been tough. He’s been his usual somber self, but as the Three-Eyed Raven, he’s also been more open about what’s truly at stake. Even so, Bran’s aloofness so far has alerted fans to the possibility that he might be doing something outside of Jon Snow and Daenerys Targaryen’s big plan to take back the Iron Throne. Forget the Night King and Cersei Lannister; could Bran be the true villain of Game of Thrones Season 8?

As outlined by redditor u/Hoser400, Cersei and the Night King have been red herrings in identifying the true villain on Game of Thrones. In a lengthy post, they outline all of the evidence to support the ultimate conclusion that Bran is no longer Bran but the Three-Eyed Raven (a fact Bran himself says multiple times on the show) and that, as the Three-Eyed Raven, his abilities, like warging and greensight, are too powerful to be contained, posing the ultimate threat to Jon, Dany, and the rest of Westeros.

Hoser400 recalls Bran’s explanation in Episode 2 about why he needs to face the Night King himself and why the Night King wants to destroy him, writing:

The theory continues by asking what Bran was doing when he warged through most of the Great Battle of Winterfell.

“What if he was doing what he does best, enslaving people to do his bidding and protect himself against the Night King?” they write.

Hoser400 even speculates that Bran might have forced Theon to charge at the Night King just to stall a little longer until Arya could show up. Of course, it’s possible to argue that Bran did all these things through good old-fashioned manipulation (giving Arya the dagger; telling Theon he was a “good man”), but is it possible he’s actually controlling them against their will?

The theory concludes by speculating that one of the final, game-changing conflicts won’t be taking down Cersei but rather Bran, who will completely lose himself inside of the Three-Eyed Raven and force the good guys to kill him before he becomes too powerful.

Cool Theory, But Where’s the Proof?

Hoser400 argues that the Night King was created not to help the Children of the Forest defeat the First Men, but to work with the Children of the Forest and the First Men to defeat the greenseers because they were too powerful. It would then make sense that, to this day, the Night King remains focused on destroying any remaining greenseers who are the living memory of all life in Westeros — a fact Bran himself states in Episode 2 as the reason the Night King wants to kill him.

It’s also argued that when Bran meets his Three-Eyed Raven predecessor, Brynden Rivers (aka Lord Bloodraven), the old man is tangled within the roots of a weirwood tree. This, Hoser400 believes, isn’t just some mystical occurrence that happens to look cool. Instead, it’s a sign of the weirwood trees trying to contain the threat of the Three-Eyed Raven.

To quickly throw some water on this theory, Leaf, the Child of the Forest living with the previous Three-Eyed Raven, tells Bran that they did indeed create the Night King to kill the first humans in Westeros (though she could be lying, I guess). Brynden Rivers’ physical attachment to the tree’s routes also seems to indicate his close connection to the Children of the Forest, who draw their magic from a network of weirwood trees across the continent.

But none of this precludes Bran from becoming a big bad in the remaining episodes of Game of Thrones Season 8, and from a narrative perspective, it could lead to some very interesting storylines.

How Does This Fit Into Game of Thrones Season 8?

Admittedly, Bran hasn’t given us a blatant reason to distrust him so far on Game of Thrones. He’s been honest about why the Night King wants to kill him; he’s encouraged Sam to tell Jon the truth about his Targaryen lineage; and he lured the Night King into a vulnerable position, which allowed Arya to eventually kill him. So sure, Bran’s been a little less aloof than usual, but what is he really up to?

Bran warging his way out of the Battle of Winterfell has been a sore spot for Game of Thrones fans because we simply have no idea what he was really doing. If Bran is the true villain now, then it’s possible he was going into other consciousnesses to control them or was working on something that would serve his overall endgame. But what is that endgame? Bran hardly seems power hungry, though it’s always been hard to tell what Bran really wants. A power grab in the world of Game of Thrones is hardly out of the ordinary.

For now, we’ll have to wait and see if Bran is really the true villain who needs to be taken out before the series ends. It would be tough to say goodbye, but you have to admit, his abilities are too powerful to be ignored.