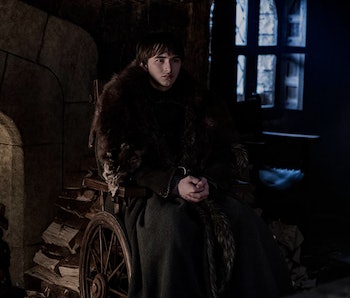 It’s still early days on Game of Thrones Season 8, but the show has already done an impressive job revealing everyone’s motivations as we sprint towards the series finale. Everyone except Bran Stark, that is. The Three-Eyed Raven is still an enigma. All we know is that he has a strong connection to the Night King and seems to be on the side of the living.

The mystery surrounding Bran Stark’s motivations in Game of Thrones Season 8 make it especially difficult to guess when and how he might die. However, a clever new theory might just reveal the Three-Eyed Raven’s fate.

Over on the GoT theories subreddit, redditor user u/mephis_baal points out that the names of the direwolves of each of the respective Stark children has, so far, pretty accurately predicted their fates. They explain it succinctly, listing out the name of the wolf, the owner, and what has happened or could happen to each owner.

The theory takes a little bit of finessing here, because names like “Grey Wind” and “Shaggydog” were never going to be clear indicators of Rickon’s or Robb’s fates. Similarly, there’s no explanation on the show about the etymology of “Nymeria” or even hints about Nymeria’s individual nature that could have ever proved to viewers Arya was destined to become a warrior. (You have to read the books or the wiki for that backstory.) As for “Ghost” and “Lady,” yeah, sure, that totally scans as far as Jon Snow and Sansa are concerned. Those two have a hell of a knack for picking out names. Jon was definitely a ghost for a short period of time, and Sansa is currently the Lady of Winterfell.

Which brings us to Bran and Summer. When Game of Thrones begins, Westeros is nearing the end of an unusual summer (the seasons on GoT can last for years or even decades). Since Bran is about 11 years old when the show begins, we know that summer has been going on at least a decade (flashbacks to both the birth of Jon Snow and Hodor’s childhood imply it was summer even then).

Given the fact that winter has finally arrived in Westeros and winters are known to last for at least a generation (and that’s without the White Walkers bringing their wintry powers down south), the implication seems to be that Bran will live to see the end of this long winter and the return of summer once again. Then again, considering winter is here and Bran seems to be the Night King’s primary target, it’s not exactly looking good.

Beyond that, even if Bran survives the battle, he might not live long enough to see the next summer. After all, Game of Thrones is basically the middle ages, and the average life span is pretty terrible.

There’s two ways that Bran’s direwolf, Summer, could predict his future. The first option: being a Three-Eyed Raven endows you with an unnaturally long lifespan, assuming Bran survives being used as Night King bait. If Bran now has a longer lifespan, he could live through a generation-long winter and die when summer arrives.

Option two: The prediction that Bran dies in the summer, courtesy of his direwolf being named Summer, implies that the Azor Ahai prophecy will come true in Season 8. You see, if Azor Ahai is reborn on Game of Thrones, just as it’s predicted in the books and as it’s been hinted at over the course of seven seasons, one of the perks of the great warrior’s second coming is that an eternal summer will be ushered in. If that’s the case, then Bran will die in the summer no matter what, provided he doesn’t die at the Battle of Winterfell.

There’s also a chance that both of these options are true and they coincide, all but confirming that Bran will survive Game of Thrones Season 8 and he will die in the summer. But we won’t know until the credits roll on the Game of Thrones series finale in May, so keep watching to see what happens.