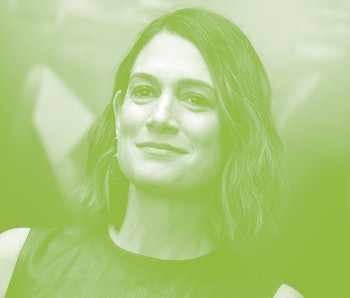 Gillian Flynn spent ten years being a professional fan. Before and after writing best-sellers like 2009's Dark Places and 2012's Gone Girl, Flynn made a living reviewing TV and books for Entertainment Weekly.

It was in her blood: She grew up around comic books, thanks to her father. "My dad made his living selling and buying comic books," Flynn told Inverse recently. "I was carted to many a convention and flea market around the tri-state area. So, I am definitely 'fandom.'"

In 2007, at the height of popularity for the NBC superhero series Heroes, you'll find Flynn's reviews that reference comic book icons like Lou Fine and Will Eisner. In 2015, she collaborated with Watchmen co-creator Dave Gibbons on an original project, Masks, about moms who become disguised vigilantes.

The concept of fandoms has a longstanding presence in Flynn's work — even if it's never central to the narrative. In her novel Dark Places, a fandom (the term for a collective group or community of diehard aficionados) frighten the book's protagonist. In Gone Girl, the parents of narrator Amy turned their child into a literary icon, one that spawned fans from everywhere and resentment from Amy.

Fandoms in the movies and in real life don't have the best reputation. Often maglined for a mob mentality and one-dimensional thinking that leaves little room for debate without name-calling, anyone who's been paying attention to popular culture over the last decade is well-aware of the toxification of "fandom" as it has manifested itself on social media. But to Flynn, and to a lot of us, being a hardcore fan of the values of a fictional universe or ethos in a sci-fi saga, and knowing every last bit of trivia about it, and evangelizing its qualities to anybody who will listen? That's something special. Being a fan requires a passion that not evyone can muster.

Now, there's Utopia. A remake of the cult UK series, Utopia on Amazon's Prime Video is Flynn's first work as a TV showrunner. And it suits her comic book sensibilities quite well.

In Utopia, a tight-knit group of fans of the comic book series Dystopia meet for the first time at a convention. They are soon dragged into a violent world when they learn their favorite comic book and its unpublished sequel, Utopia, isn't fiction but a real person's story. It is also a cover-up to a global conspiracy that puts millions of lives in danger. The twist: Only these obsessive fanboys and fangirls can save the world.

Throughout the series, a few brave nerds grow from zeroes to heroes as they confront an enemy more powerful than they could imagine. Despite instances of unflattering (and accurate and hilarious) moments that make comic book fandoms look unpleasant — from mansplaining men to awkward cosplayers — Flynn largely shows affection to various forms of fandom. Whatever critiques of obsessives appear in Utopia, it's her characters doing the talking, not her.

"Me, personally, I love fans. I love people who love their shit."

In the first episode of Utopia, set at a convention, super fan Samantha (played by Jessica Rothe, who notably died over and over in Happy Death Day) argues about the clues hidden in the popular comic Dystopia. This leads to a passionate and scathing speech about fan culture:

Needless to say, Samantha doesn't make many friends at the convention.

"I put [that speech] in Samantha's mouth because I've had arguments with my friends, mostly women and feminists, who say along the lines what Samantha says," Flynn explains on the origins of Samantha's speech. "If comic books were monetized by women, for women, they would not be taken with the seriousness as a largely male-dominated genre. I've had that argument. I put that in Sam's mouth because it's a worthwhile discussion to have."

"I think all of our characters want Utopia to be real," says Jessica Rothe, who plays Samantha. "Sam is an uber-fan but for different reasons. She and all the nerds are fans because it holds deep truths. They eye into the lore and treat it as a treasure map to solve their issues. For Sam, it's all about saving the world. She believes this is the key. That was an incredible place to live in, to have that much belief in a piece of paper."

"It's kind of a love letter to fans and fandom culture," says Ashleigh LaThrop, who plays another one of the central Utopia heroes, Becky. "There is something about how easy it is to get swept up, but I don't think that's a bad thing. Our characters grow and change, and in a lot of ways for the better." LaThrop adds that Gillian Flynn is "kind of a sly nerd." "She's really into LARPing. We've had multiple conversations about what we were going to dress up this year at Comic-Con."

Cory Michael Smith, who stars in Utopia as Thomas Christie, son to billionaire Dr. Kevin Christie played by John Cusack, has the most experience with fans from his time as a regular on the Batman crime drama Gotham.

"Fans of comic books, they're the most intense and devoted fanbase ever," he says. "They're deeply enthusiastic, often more well-informed than myself or my fellow actors. There's something thrilling about those characters suddenly finding themselves in the world they're obsessed with. It's terrifying yet sort of titillating and thrilling."

Flynn says that the original UK series Utopia "had a lot in common" with her tastes as a storyteller. "The idea of what's on the surface versus what's underneath, how we treat each other in front of people versus behind closed doors. I really shined up all of that," Flynn says. "At the same time it was a different world I normally inhabit. I normally write psychological stuff. Internal. Insular. This challenged me. It was an ensemble with lots of characters and lots of points of view in the great big world. It was exciting and scary at the same time."

More like this
Entertainment
Jan. 30, 2023
Doctor Who Could Become the New Marvel — But There's a Catch
By Ryan Britt
Entertainment
Jan. 28, 2023
Last of Us Episode 3 release date, time, and trailer for HBO's zombie show
By Claire Fox
Culture
Feb. 2, 2023
Buck Rogers in the 25th Century’s Most Baffling Change Also Gave Us Its Best Character
By Ryan Britt
LEARN SOMETHING NEW EVERY DAY.
Related Tags
Share: