'What If?' Episode 9 sets up a major 'Avengers 5' crossover

“You have been chosen.” 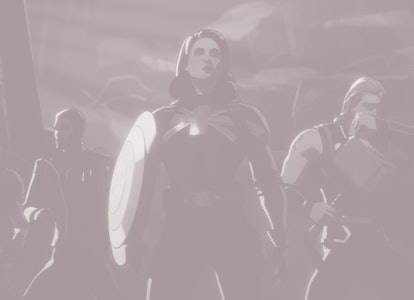 The What If…? Season 1 finale is the Disney+ series’ most action-packed episode to date.

Picking up where the show’s penultimate installment left off, the finale sees The Watcher (Jeffrey Wright) assembling a multiversal team made up of characters from the series’ first eight episodes, including Captain Carter (Hayley Atwell), Star-Lord T’Challa (Chadwick Boseman), Doctor Strange Supreme (Benedict Cumberbatch), Party Thor (Chris Hemsworth), and a few others.

The team, which faces off against Infinite Ultron in the episode’s climactic set-piece, is dubbed the “Guardians of the Multiverse” by The Watcher — and there’s reason to believe What If…? Episode 9 isn’t the last we’ve seen of this superhero team.

Crossing Paths — While the What If…? Season 1 finale ends with The Watcher returning each member of its central team to their respective universes (for the most part, at least), the episode also leaves the door open for the Guardians of the Multiverse to reunite in some form or another. That reunion could, of course, happen in the already confirmed What If…? Season 2, which would make sense given the fact that the team is essentially What If…?’s Avengers.

But with the Marvel Cinematic Universe set to start delving deeper into the multiverse in the coming years with films like Spider-Man: No Way Home and Doctor Strange in the Multiverse of Madness, it seems likely that the Guardians of the Multiverse could pop up in live-action. In fact, a team-up between What If…?’s superhero team and the Avengers would work well as a climactic capper to the MCU’s current multiversal arc.

That sort of moment that would make sense in a film like, say, Avengers 5 — especially if that film ends up being the culmination of the Kang the Conqueror (Jonathan Majors) storyline set up earlier this year in the Loki Season 1 finale.

Protectors of the Multiverse — There’s no telling what Marvel’s Kang plans may entail, but Loki seemed to give us at least some idea of what to expect. More specifically, Loki introduced the idea that mere existence of the multiverse will lead to a multiversal conflict headed by various Kang variants from different universes. Therefore, it seems only logical that, in order to fight multiple Kangs, the MCU’s heroes will team up with different versions of themselves from alternate universes.

Fortunately, the MCU has an alternate version of the Avengers that would fit that bill, thanks to the What If…? Season 1 finale. After all, if the new Guardians team is powerful enough to put a stop to a villain like Infinite Ultron, then they should be able to give the MCU’s prime Avengers the helping hand they’ll presumably need in their inevitable fight against Kang.

The Inverse Analysis — The first seasons of both What If…? and Loki have proven that Marvel Studios can essentially do anything it wants — no matter how crazy or massive the concept. While that doesn’t mean that the studio plans to bring the Guardians of the Multiverse and the Avengers together, the door is certainly open for that to happen. To be perfectly honest, it’s hard not to feel like that’s exactly what the What If…? Season 1 finale is setting up.

As Infinite Ultron says in What If…?’s eighth episode: Anything is possible in a multiverse.

What If…? is streaming now on Disney+.