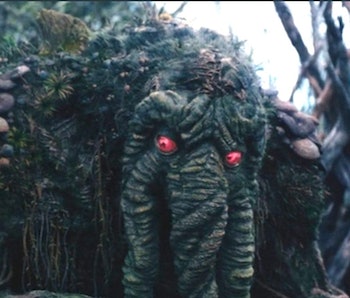 Werewolf by Night is a retro horror delight. With its black-and-white motif, blood-spattered fight scenes, and the arrival of everyone’s new favorite character, Man-Thing, the Disney+ special is sure to be a Halloween classic for years to come. But as much as the horror fan in us is happy to leave it at that, the Marvel fan within needs to know how Werewolf by Night fits into MCU canon.

Thankfully, Werewolf by Night has the answer to that question, and it’s staring you right in the face. Minor spoilers ahead!

Is Werewolf by Night part of MCU canon?

The hour-long Marvel movie doesn’t dwell on it. Instead, it’s handled with a single line as the film opens. As narrated by Rick Wasserman, the opening shows a series of black-and-white drawings to introduce us to this world. The first one features the original Avengers lineup from the 2012 movie as Wasserman describes the MCU’s “heroes and marvels.” The camera then pans down to reveal the monsters hiding in the “darkness” and the people who hunt them.

Are there demons literally hiding underneath Avengers headquarters? Probably not, although anything seems possible. The point being made here is that while audiences have been watching Marvel’s superheroes save the universe, an entirely different battle (but equally important) is being waged in the shadows.

Speaking to Polygon, director Michael Giacchino explained why he chose to depict the Avengers in this way.

“Oh, we tried for a long time to just say [in the intro], Look, this is part of the MCU,” he said. “But it felt like we also needed to show it as well. And I said, ‘Well, what if we just showed it in the same illustrative way that we’re showing these other images up front?’”

“There’s this whole corner of the Marvel Universe that no one knows anything about,” Giacchino continued. “It’s a very underground sort of area. And these hunters and these monsters, they all kind of exist in the shadows, in a place the rest of the world won’t admit to or doesn’t pay attention to. That [intro] was our way of saying, All of that other stuff is still there, it’s all good. No one worry!”

Ok, but we still have one more question...

When does Werewolf by Night take place in the MCU timeline?

Unfortunately, there’s no canonical answer to this question, at least not for now. Beyond that one image of the Avengers assembling, there’s no connective tissue here to help us piece together. (It’d be helpful if Oscar Isaac showed up and said, “Hey everyone, I just got back from Egypt, need some help catching this monster?” But that would also probably ruin the vibe Giacchino is going for.)

However, we do have one theory. If you take that opening imagery as literally as possible, it seems to be suggesting that the events of Werewolf by Night are happening in parallel to The Avengers (2012). If that’s the case, then this movie is set over a decade behind the current MCU, which means we could get an entire series of monster-focused stories set in parallel to the Marvel timeline between 2012 and the present.

This also means that if Jack (aka, Werewolf by Night), Elsa Bloodstone, or Man-Thing do eventually show up in a major Marvel movie, they could be very different from the versions we saw here. After all, a decade is a long time, and people (or Man-Things) tend to change as they get older.

Of course, that’s just a theory though. But until one of these characters actually connects to the rest of the MCU, it’s just as possible as anything else.

Werewolf by Night is streaming now on Disney+.