Can I get a Witness?

“We live in a world of great threats.” 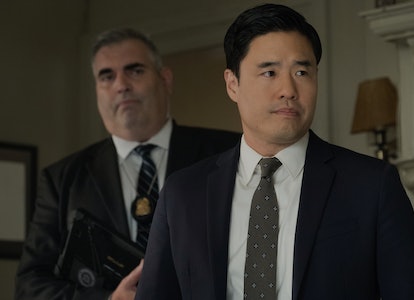 WandaVision is without a doubt Disney+'s best Marvel original. It's also the only Disney+ Marvel original, but the point still stands. With its sitcom fantasy world, it's asking a lot of questions. Who created the Westview bubble? Is Wanda completely in control of it? Are multiverses involved? Fans are asking all these questions, but this theory answers the one the fandom seems to have forgotten about — who is Jimmy Woo's missing witness?

When we first see Agent Woo in WandaVision, he's consulting Monica Rambeau about a missing witness in the witness protection program. That concern is quickly brushed aside because of Westview's strange perimeter and absence from the locals' memories, but the case remains open.

While we see reports of all the other missing people on Jimmy's bulletin board, there's no mention of the witness again. So who is this mysterious figure? Redditor u/pulpbusters collated all the evidence we have, in WandaVision or otherwise.

First, Jimmy Woo mainly works with those on the West Coast, as his first appearance was supervising Scott Lang's house arrest in the Bay Area. If someone was relocated to suburban New Jersey, chances are they started somewhere pretty far away, so this makes sense.

So, what we know about Jimmy's target is that they:

Seems pretty vague, right? Well, this theory finds the perfect character to fit the bill — Justin Hammer. That's right. Sam Rockwell's smarmy businessman who played rival to Tony Stark in Iron Man 2 could make a reappearance. Sure, he hasn't been seen since that movie all the way in 2010, but we first saw Darcy Lewis in 2011, all bets are off.

Should he somehow be using the Westview anomaly to make his way make into the mainstream, he could play a new, bigger role. In a new phase of the MCU, he could become the anti-Tony Stark he was created to be, filling the power vacuum of his Iron Man's absence, however macabre and disrespectful that may be.

In fact, the theory goes a step further, positing Justin Hammer will take on a Norman Osborn-like role in the future of the MCU, founding H.A.M.M.E.R., an in-comics replacement to S.H.I.E.L.D. It's never revealed what the acronym stands for, so perhaps in the MCU, it won't stand for anything, just a vain example of Justin Hammer's egocentricity.

While Justin Hammer doesn't carry the Luke Skywalker-level cameo clout that Elizabeth Olsen teased in an interview, he could be the character that Paul Bettany teased he's "always wanted to work with" that he "shares some intense scenes with." Justin Hammer may be forgotten, but Sam Rockwell has now had a couple of star turns in works like Three Billboards Outside Ebbing, Missouri and Fosse/Verdon.

Maybe the thing needed to take WandaVision from "good for a TV show" to "holds its own against the movies" is simply a supporting character from the fourth-worst MCU movie.

More like this
Entertainment
Sep. 24, 2022
The MCU’s Ironheart will improve on the comics in one pivotal way
By Richard Newby
Entertainment
Oct. 1, 2022
Who is Hulk King? She-Hulk could be setting up a Secret Invasion villain
By Dais Johnston
Entertainment
Sep. 30, 2022
Armor Wars movie update proves Marvel can't quit its worst addiction
By Jake Kleinman
Related Tags
Share: