'WandaVision' Easter eggs: A creepy prophecy from the comics may reveal the true villain 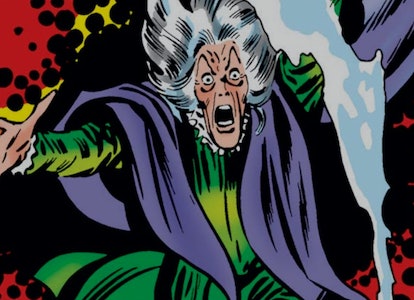 Agnes' big reveal at the end of WandaVision Episode 7 wasn't a surprise to comics fans. Her true identity of Agatha Harkness was hidden in plain sight — the first and last syllables of the name make up Agnes. However, it's unlikely Kathryn Hahn is the main villain of the series, even if it was "Agatha all along." A dip into the comic archives shows the true connection between Agatha, Wanda, and the Darkhold book we briefly saw in Agatha's basement. Spoiler alert: it involves the Pope.

While Agatha appears to own the Darkhold book in WandaVision, her interactions with it in the comics are limited to one series, Darkhold: Pages from the Book of Sins. This series follows Vicki Montesi, the daughter of a priest with the power to sense when a page of the Darkhold is being used to grant someone's ill wishes. She starts hunting down the pages one by one, which leads her into the path of Dr. Strange, Wanda, and Agatha Harkness.

These three begin their own search for the Darkhold pages after a realization that the return of the book's creator, the Elder God Chthon, would coincide with an event in Wanda's life. This prophecy, called the Malachy Prophecy by Agatha, reads as follows (after being translated from the original Latin):

"A child born of no man and a woman marked by sin; daughter becomes mother; then will the great return begin."

These four lines directly connect to Wanda's life, specifically within the events of WandaVision. Wanda had two children born of no man, and Wanda is marked by sin because of her own involvement with Chthon. Then she became a mother, and now we may just see Chthon's return.

That seems pretty par for the course for a spooky Marvel prophecy to raise the stakes, but the truth is a lot more interesting than that. The Malachy Prophecy, also known as the Prophecy of the Popes, is a real prophecy that exists in Catholicism. Though not officially part of the doctrine, it's almost a conspiracy theory among certain defenders.

Claimed to be written by St. Malachy in the 12th century, this prophecy was published in 1595 and consists of 112 phrases of Latin, each meant to describe a pope. While there are all sorts of cryptic phrases ranging from "he will come from school" to "Pig in a sieve," there's no mention of the lines Agatha refers to.

So what does this mean for WandaVision? Considering we know WandaVision will tie into the next Doctor Strange film, grabbing elements from this comic run would make a lot of sense. However, don't expect the prophecy to be called the Malachy Prophecy. While this may be a fun Easter egg for theology nerds who read Marvel comics in 1993, involving the Catholic Church in an already very confusing storyline involving multiverses may just be a step too far.

Still, these four lines could be the key to not only WandaVision's big bad but possibly a villain that could change the MCU as we know it.