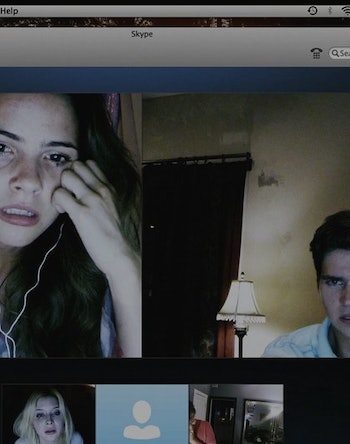 When Unfriended was being promoted in April 2015, it looked like just another dumb found-footage movie. But people who had seen it on the festival circuit (when it was titled Cybernatural) recognized it was far more ambitious. Unfriended invented a new cinematic language in its watershed depiction of online socializing.

From a narrative standpoint, Unfriended is a pretty basic horror movie: The ghost of a dead high schooler returns to torment the classmates whose bullying drove her to suicide, picking them off one by one in gruesome fashion. Screenwriter Nelson Greaves and director Lev Gabriadze tell a familiar story in an unconventional way, building genuine emotional stakes among six friends who all contributed to the harassment that led to the demise of Laura Barns (Heather Sossaman).

Unfriended is notable for its remarkably true-to-life rendition of how we communicated online in 2014, via a real-time depiction of the laptop of main character Blaire Lily (Shelley Hennig), the least reprehensible teen and the movie’s requisite “final girl.” Early scenes unfold without dialogue, as Gabriadze builds Blaire’s backstory via social media posts, web searches and snippets of video. Unfriended effectively builds suspense via interrupted online processes, starting with Blaire’s truncated viewing of the video that drove Laura to suicide.

That video, paused at the halfway mark when Blaire answers a call, hangs in the background for nearly the entire movie, teasing viewers with the truth about Laura’s fate. Without any ominous music or jump-scares, the filmmakers manage to turn Facebook’s “Laura is typing” messages into a portent of dread, and make the alert of an incoming message equivalent to the knife-wielding killer suddenly appearing in the background.

Those unique online activities give the viewer just enough personal detail about the characters without derailing the narrative with exposition. Simultaneous communication is one of Unfriended’s most ingenious techniques. Blaire and Mitch’s private instant-message conversation during a group video chat allows for genuine investment in their relationship as Laura tries to tear them apart.

Perhaps the most haunting moment in the movie comes when Mitch asks Blaire to explain the struggles Laura was going through before she died. Blaire types, then deletes several sentences seemingly describing childhood abuse, only to ultimately send Mitch a generic message about family troubles. It says more about Laura’s fragile mental state than any long monologue could, and it does so in the midst of several other things happening on-screen.

Even when Unfriended dips into horror cliches – like cheesy death scenes and a final stinger that breaks from the consistent on-screen style – the interplay among characters remains gripping. Filmmakers have consistently struggled to depict online communication (think 1995’s hilariously alarmist The Net with Sandra Bullock), and still clumsily throw text messages onscreen to convey back-and-forth communication. Four years after David Fincher’s The Social Network brilliantly depicted the rise of Facebook, Unfriended became the first great social media movie, and its influence will last long after the closing shot of its ghost in the machine claiming one final victim.