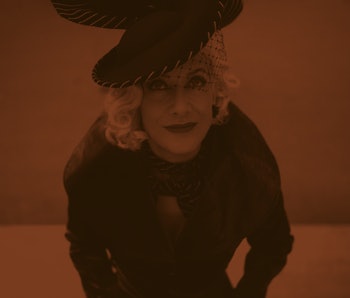 The Umbrella Academy stretches itself wide. Based on the comic series by Gerard Way, the Netflix series has an “everything and the kitchen sink” quality. A boy who’s really in his forties, a man who is also a gorilla, a talking chimpanzee, a time-traveling bureaucrat with a goldfish bowl for a head, the civil rights movement, cults, UFO conspiracy theories, the challenges of being disabled in the 1960s, amnesia, murderous Swedes, President Kennedy’s assassination, and not one but two apocalypses. Along the way, there’s also little Yiddish.

It’s this last part that has caused controversy. The Handler, played by Kate Walsh, isn’t part of the core superhero team, but rather a bigwig at the mysterious organization called The Commission with which the Umbrella Academy, an adopted family of powered individuals, has an antagonistic relationship. She speaks Yiddish casually. In the Season 1 finale, however, she goes as far as to say that the Commission has a common Yiddish phrase as a part of company wisdom.

There was a serious backlash. The Board of Deputies of British Jews published an open letter about The Handler, claiming that “the use of a Yiddish saying by the evil boss of an organization which controls the world’s timeline is clearly an anti-Semitic trope.” After Umbrella Academy Season 2 premiered in July, the calls started to amplify on social media.

One critic on Twitter pointed to the history of anti-Semitic tropes that emphasize lies portraying Jews as the secret masters of the world:

“Jews have been persecuted throughout history because people think they are a secret organisation bringing about the end of humanity and global domination. So, when the show had the handler speaking Yiddish, it implies that she’s Jewish, because goyim [non-Jewish people] simply just don’t usually speak it.”

The complaints rose to the level where one of the show’s creators, Steve Blackman, offered an official response in a statement to NME:

“The accusation of antisemitism in The Umbrella Academy is hurtful and, more importantly, factually incorrect. I wrote these episodes, created the character, and am myself Jewish. While I understand audiences sometimes receive things in a different way than creators intend, The Handler was not created as an anti-Semitic character.”

Blackman added that the Handler "speaks every language," including Swedish, Mandarin, Yiddish, and English in Umbrella Academy Season 2.

The Handler’s use of Yiddish is a little jarring. When she drops the Yiddish phrase for, “The eggs think they’re smarter than the chicken,” at the end of Season 1, it calls into question: Why this phrase? Why this language? The same question comes up when she uses the language with her own adopted daughter, Lila, in Season 2. Why Yiddish?

For this Jew, at least, it’s hard to see Umbrella Academy as anti-Semitic. Nothing else about The Handler implies that she is Jewish or has any particular ethnic background at all. She doesn’t embody other anti-Semitic tropes like greed or cowardice. There's also the trope of dual loyalties, which she arguably fits because of her constant backstabbing, but even dual loyalties require loyalty to someone. The show is ripe with conspiracies, but they involve UFOs, time travel, and stopping multiple apocalypses. Nothing about this feels particularly “Jewish” to me.

But still, why Yiddish? Perhaps less than an anti-Semitic trope, the use of the language in The Umbrella Academy signifies its long history as a source of comfort in American television.

The history of the Yiddish language in America is a long one, with phrases like “Oy vey!” eventually working their way into mainstream popularity. A large part of this is due to the outsized role Yiddish played in the early days of television. In 1949, a long-running radio show called The Goldbergs made the switch over to TV and became one of television's earliest hits. The show focused on the Goldberg family, lower-class Jews in The Bronx, with a special focus on matriarch Molly.

The star of the show, Gertrude Berg, helped create the concept of a Jewish Mother in the American mind: something of a gossip, assertive, and ultimately warm and caring with a big heart. Terms like "shmooze" and Berg paved the way for Seinfeld, The Marvelous Mrs. Maisel, and Yiddish-friendly shows like The West Wing , all the way up to ABC's current, unrelated sitcom The Golbergs. There's been something of a Yiddish renaissance of streaming channels, pioneered by Netflix's Shtisel.

A 2009 documentary, Yoo-Hoo, Mrs. Goldberg! celebrated both Berg and her character’s influence.

Berg was essential in creating the basics of a “family” TV show, which as decades passed onwards shape-shifted into “found family” shows like Friends, and eventually, subversive looks at family like The Umbrella Academy, where the parents are as cruel as Molly Goldberg was kind.

The Umbrella Academy wants to upset every applecart it sees. And using the comforting feeling of Yiddish as a way to lure viewers into a false sense of security is as clever as any of the time-traveling meshugas that happens in this season.