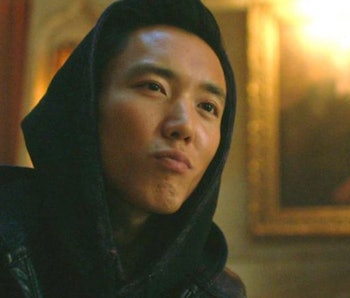 The final episode of The Umbrella Academy Season 2 was packed full of twists, from Rita's true identity to the future of The Commission, but the biggest shock was saved for last. Fans of the show — and especially of Justin H. Min's character, Ben Hargreeves — will have plenty to ponder during the long wait for Season 3.

Lucky for you, we asked Umbrella Academy showrunner Steve Blackman all about that Season 2 finale and what it means for Ben.

Warning: Major spoilers for The Umbrella Academy Season 2 below. ☔️

After the Umbrella Academy finally avoids the apocalypse in 1963 and manages to return to their own present, they discover that things have changed. A lot. Their adopted father, Reginald, is alive, and he's got a new superhero team called the Sparrow Academy, featuring Ben along with several other shadowy figures and floating green cube.

If you're wondering what the Sparrow Academy even is, we've got a full explainer right here. But what does this mean for Ben? How is he alive? And why is he on this superhero team too?

In short, Blackman and his team are taking a concept from the comics and tweaking it in an interesting way. In the Umbrella Academy comics, the Sparrow Academy is still mostly a mystery, but they appear to be another superhero team made up of people from the same group of 43 super-powered babies born in 1989 who've been hiding out somewhere (maybe in another dimension).

But on the show, Blackman is using an alternate timeline to introduce them as a different version of the original time. Basically, when Reginald met the Umbrella Academy in 1963 and hated all of them, he decided to adopt a different group of heroes, thereby creating a different timeline. However, he never met Ben (since Ben is dead), which explains why Ben also gets to be part of the Sparrow Academy.

Blackman tells Inverse this was always the plan, noting that the show has given the dead Umbrella Academy character a larger role than the comics, making this an obvious next step.

"I love Justin and I love the character of Ben, and we've really grown that character out to become bigger than the graphic novel," Blackman says. "He's a fan favorite."

The showrunner added that the Ben we meet at the end of Season 2 isn't the same as the one we know.

"It’s a different character," he says. "I don’t want to give anything more away, but it may not be the Ben we know."

As for the original, dead Ben, we're still dying to found out how his character died. The death happens before Season 1 and has yet to be explained in the show or the comics. According to Blackman, that's been an intentional choice by series creator Gerard Way, though we might get an answer in Season 3 (if we're lucky).

"That answer will come later on, hopefully in another season if we’re lucky enough," Blackman says. "It’s something that I think Gerard wants to hold off a little longer in the graphic novels. I’m trying to respect that. So I think something down the road."

The Umbrella Academy Season 2 is streaming now on Netflix.