“I must simply wait and observe events as they occur...” 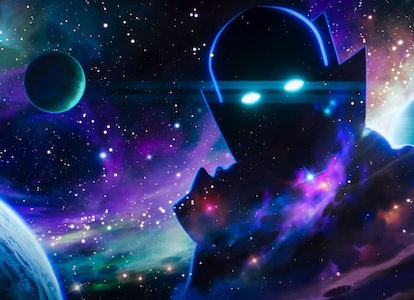 The next Marvel Cinematic Universe TV series is a real wild card.

After three series tackled the immediate fallout from Avengers: Endgame, the events in Loki have opened the MCU to a whole new dimension: the multiverse. And Marvel’s What If..? will introduce this new frontier to fans.

However, the multiverse is an infinitely large space. For us mortal viewers, we need a tour guide to help us through all these alternate realities and the vastly different and often hilarious stories that lie within. Thankfully, our guide is Uatu the Watcher, but his comic character is much more than just a multiversal Rod Serling.

Uatu even mentions this vow in the trailer for What If...?. He’s very much kept in mystery, hiding in shadow and only narrating the action. However, in Marvel Comics, Uatu doesn’t only make an appearance; he’s been around for over half a century.

Uatu the Watcher was first introduced in Fantastic Four #13, where he warned the super squad that they shouldn’t have brought their petty squabbles with Red Ghost to the Moon because that’s his observation point. So he forces them to work out their problems by themselves before it descended into all-out war, and when the Four emerged victoriously, he disappeared.

The Watcher may be bound to a law of non-interference, but he certainly breaks it all the time. Uatu warned the Fantastic Four of oncoming trouble multiple times, even transporting them through time to prevent tragedies.

Thankfully, these Time Crimes did not go unanswered. Uatu stood trial in front of other Watchers for his crimes, where he apologized and promised never to interfere again in the lives of those he watches. Spoiler alert: he totally did.

Uatu the Watcher later became the narrator of the What If...? comic series, the same role he plays in the TV series. But there’s a chance he could play a bigger role. Knowing his long comics history of meddling, Uatu could be the person who warns the Avengers of multversal threats or even alert them to Kang the Conqueror’s control of the Time Variance Authority.

Though we may not see him as a major player in What If...?, Uatu could be more influential to the MCU than we know.