“My people are hopeful, I think, but also scared.” 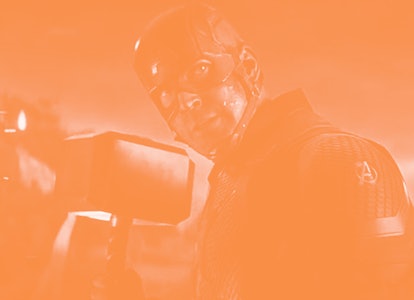 The MCU was changed forever when Endgame introduced the concept of time travel. Suddenly, not only was all of space ripe for exploration, but all of time as well.

Now, on the brink of Doctor Strange in the Multiverse of Madness and Spider-Man: No Way Home, parallel universes are fair game. So the question remains: with all these frontiers at Marvel’s disposal, how do you craft an Avengers team-up movie that uses them to the best of their ability?

The answer lies in a 17-year-old comic.

From 2003 to 2004, Marvel released Marvel: 1602, an eight-issue comic series written by the iconic sci-fi and fantasy author Neil Gaiman, author of Good Omens and Coraline. It follows a strange alternate universe where Nick Fury serves Queen Elizabeth I, Stephen Strange is her personal physician, and people with strange abilities known as “witchbreed” are popping up left and right, some seeking refuge in a school run by Carlos Javier.

The entirety of Marvel: 1602 is a re-interpretation of our favorite heroes 400 years in the past. Peter Parker is Peter Parquagh, Fury’s apprentice; Matt Murdock is a blind Irish minstrel; and the Fantastic Four disappeared aboard their ship, the Fantastick.

(Also there are dinosaurs in America, but that’s a whole other thing.)

While the foe is initially posed to be a version of Dr. Doom, the actual threat is a lot more wide-spanning: Doctor Strange is plagued by thoughts the world could be ending, and a spectral visit to an alien “watcher” reveals the reason why all these powerful beings are appearing: it’s because someone from the planet’s future was sent 400 years back in time, causing a rift in spacetime.

That rift? Native American Rojhaz who is revealed to be... Steve Rogers, sent back in time as punishment for standing up to Purple Man, who is President-for-Life in his future.

At the end of the series, the timeline splits: one version has Nick Fury carry Steve to the physical rip in time, causing the timeline to mend itself, and the other where they disappear, allowing the heroes to live on.

It sounds like a wild pitch, but 1602 is actually the perfect plotline for Avengers 5 to follow. The introduction of multiverses make the explanations easy to communicate, and the time travel element of Endgame just paves the way for an even greater scale of travel. Finally, an alternate version of Captain America, one that represents the uncolonized, native America, would be the perfect addition for a franchise that has spent an entire series dissecting what the name means.

Having Avengers 5 be set in the Marvel 1602 universe would also prove the perfect launching off point for a follow-up series. Just as the timelines split in the comics, an animated series could explore the unaltered timeline while the mainstream MCU movies follow the mended timeline.

Is a 1602 adaptation too big a swing? Kevin Feige doesn’t think so — at least, he didn’t think so back in 2008, when he told MTV News he was interested in a possible adaptation, but added that the MCU needed time to really explore the characters before such a reinvention. Is 12 years enough time for him?

Whether it’s in Avengers 5, Avengers 10, or just in an episode of What If?, Marvel: 1602 has the potential — and the Gaiman name association — to quickly become a cult MCU favorite. It would provide an opportunity to stretch the franchise to its limits, and bring back (a version of) Steve Rogers in the process. What’s not to like?