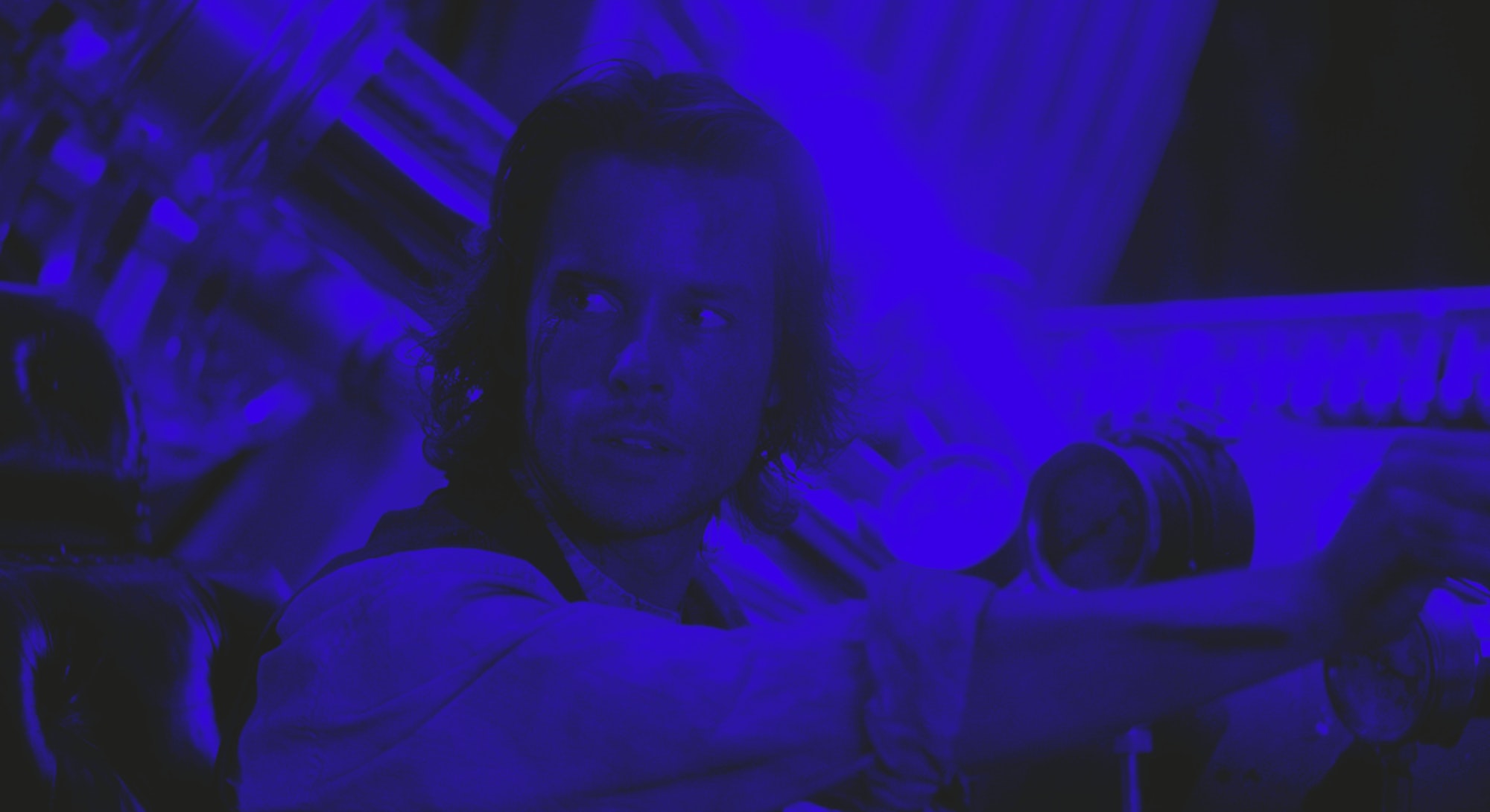 In 2002, H.G. Wells’ classic 1895 novella, The Time Machine, was given a glossy modern makeover as a Hollywood feature directed by the legendary author’s great-grandson, British filmmaker Simon Wells.

Before stepping into The Time Machine, Wells cut his teeth with animation work on blockbuster movies like Who Framed Roger Rabbit? before helming DreamWorks classics like An American Tail: Fievel Goes West, Balto, and The Prince of Egypt.

The 2002 film was the second attempt to bring the clock-spinning story to the silver screen, with the first being a beloved 1960 adaptation delivered by special effects wizard George Pal and starring Rod Taylor as the ambitious inventor. Guy Pearce (L.A. Confidential, Memento) took the starring role in the new Time Machine and plays Alexander Hartdegen, a late 19th century Columbia University physics professor whose fiancée (Sienna Guillory) is accidentally murdered during a robbery.

His grief drives him to complete a fantastic machine to travel through time and change the tragedy’s outcome. When he discovers that fate can’t be altered, he heads into the far future and encounters a race of savage creatures called the Morlock who have enslaved primitive humans called the Eloi. Hartdegen meets an Eloi, named Mara (Samantha Mumba), and together they begin an uprising to stop the Morlocks’ brutal reign.

“I was surrounded by incredibly smart and good people on The Time Machine who saved me from making an absolute ass of myself,” Simon Wells tells Inverse.

In our interview with Wells, the director speaks about the pressures of adapting his famous ancestor’s iconic novel, manifesting the Morlocks’ animatronic masks, and the whereabouts of the actual time machine prop today.

INVERSE: How does The Time Machine hold up for you two decades after its release?

SIMON WELLS: I’ve got to be honest; I don’t go back and watch movies I’ve made. Way back in the beginning of my career, I was Supervising Animator on Who Framed Roger Rabbit?, and it was about six years before I could see part of it without memories of the making of the movie overwhelming me. It was a good 10 years before I could actually see the movie the way other people saw it. There tend to be painful memories that make you flinch deep inside.

“I said, ‘Hey guys, I really ought to be directing this because, you know, the name!’”

How did you become attached to Time Machine, and, being part of the Wells legacy, did the job come with added pressures?

The project moved around a good deal. Originally, Brad Silberling was going to direct it, then Steven Spielberg decided he wanted it. Then he was going to go off to do something else, and it went back to Brad, but he’d moved on. So they were looking around for a director. I’d just come off The Prince of Egypt, and I threw my name in the ring because I had an interest in getting into live-action.

I said, “Hey guys, I really ought to be directing this because, you know, the name!”

Steven really liked that idea, and I’d worked with him for many years by then. So I just kind of got offered the gig. Looking back, it was far too big a movie given my limited experience in live-action.

What was the biggest adjustment going from animation to live-action?

It was a combination of the sense of personal responsibility and the sheer punishing schedule of getting something like that done. The director of an animation feature has a lot of people around him, and you have time to fix things. It doesn’t all have to get done that day because you’re shooting and you don’t have the location tomorrow.

The ambition of it was huge. The actual process: how to put shots together, how to build up a scene, that’s very similar to animation. The hard part was dealing with the sheer stress and logistics of it all. You have a bunch of people helping you and organizing everything though.

“I didn’t really know as much about the story as I should have.”

When we’d roll out to the location at Sand Canyon Ranch in Santa Clarita, you’d see this circus of tents and trailers, and I’d think, “Holy cow, the number of people that are on this movie!” The actors go for touch-ups and makeup while the grips set up the cameras and the electrical guys are changing the lights and you’re aware that thousands of dollars are ticking away and you’re just sitting there twiddling your thumbs. The stress is enormous.

What elements of the original H.G. Wells novel were important to retain?

I came into that movie after a lot of work had been done developing the story. I didn’t really know as much about the story as I should have. I was more the director for hire, and I didn’t know enough to exert influence. I had more impact on the overall look of the movie and had great fun working with [production designer] Ollie Scholl in designing the time machine.

What was it like working with Guy Pearce and forming the time traveler’s character?

Guy is an interesting actor. I was keen on casting him because of Memento, where he was immensely charming and unguarded. I think it’s one of the best things he’s ever been in. As an actor, he has an immense amount of experience. He’s worked with good directors and very bad directors. He defends himself by having rehearsed what he’s going to do very carefully and that protects him against inexperienced directors, like me.

He had a clear idea of what he wanted to do and was not interested in free-forming anything. That was probably a good thing because I didn’t know much about directing actors. He was always there, always prepared, always professional, and never late to set.

What were your associations with the 1960 version of The Time Machine?

It is a good movie. I remember seeing it as a kid, and it deeply affected me. It’s a pretty straightforward adventure movie, and there are a lot of things about it that are terrific. For its time, the visual effects are pretty impressive. It was very much a B-movie in terms of its budget.

You had an all-star team of visual effects firms working on The Time Machine. What was the collaboration with these famous crews like?

The Morlock design was great fun. Had I known more about it going in, I would have had the design slightly differently. For the Morlock faces, the actors don’t actually see out through those eyes, those eyes are animatronic. They’re seeing out through a little camera in the nose. They had these little TV screens on glasses that were right in front of their eyes. I feel really bad for those stuntmen. It was an impossible thing to have to work inside, and they did a tremendous job.

Nowadays, every movie employs every visual effects firm out there. It’s hilarious. You sit and watch the credits for Marvel movies and wonder if there’s anybody that didn’t work on this film. That was all starting to happen way back then, to have multiple visual effects houses doing stuff. Industrial Light & Magic did the CG Morlock sequences, Stan Winston did the actual physical things, and the rest was Digital Domain.

“It was a million-dollar prop so they weren’t going to let me have it.”

Where did that elaborate time machine prop from the movie end up?

Warner Bros. has it. It was a million-dollar prop so they weren’t going to let me have it. Also, it weighed like a ton and a half. That central bulb had the transmission of a Buick built in it and this huge five-horsepower electric motor so you don’t just put it in the back of your car. Plus, the sphere has a diameter of something like 10 feet.

It was in the Warner museum. I got to go visit it once, but since then it’s been relegated to one of those Raiders of the Lost Ark warehouses filled with movie stuff. It’s a pity because it genuinely looked good. It’s a shame it’s not on display in one of the theme parks somewhere.

Having immersed yourself in the subject, do you believe in the possibility of time travel?

The difficulty with time travel is that if it existed, we would already know about it. Unless we happen to be on one of the timelines where it doesn’t happen. There’s a logical conundrum involved in time travel, which is why I’ve never done another time travel story since.

Are we going to do the multiverse idea where if you go into the past and alter even the slightest thing, the future you come into is not the one you left? That’s what they played around with in Back to the Future II and III.

Did you keep any mementos from the sets of The Time Machine?

I have one of the control levers from the time machine, which is beautiful. It’s turned brass with a crystal on top. And I got one of the watches that got crushed in the time machine mechanism. They built a bunch of lead replicas they could drag in for multiple takes, so I kept one of those.

Looking back, I was surrounded by incredibly smart and good people on The Time Machine who saved me from making an absolute ass of myself. I am grateful to the people who dragged that movie through for me. I rode on their shoulders to an amazing extent.

The Time Machine is streaming on Paramount+.