“You look, but you do not see” 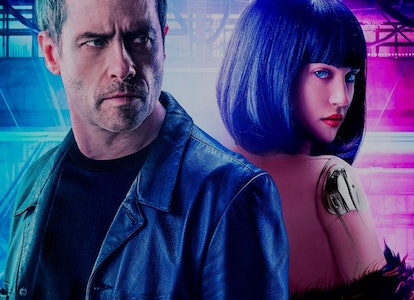 At what point does a loving tribute become a knockoff? It’s an interesting ethical question, but there is a firm legal precedent for it. The 2012 film Lockout, starring Guy Pearce, was so similar to John Carpenter’s Escape from New York that the director successfully sued Lockout’s producers.

Almost a decade later, Guy Pearce is starring in another sci-fi love letter and debatable knock-off. But this 2021 thriller, now streaming on Netflix, uses its inspirations in nostalgic and entertaining ways.

Directed by first-time director Andrew Baird, Zone 414 stars Pearce as David Carmichael, a private investigator in the distant future where the titular colony is populated with humanoid androids. The robots’ creator, Joseph Veidt (Jonathan Aris), hires David to locate and rescue Veidt’s daughter with the help of his most advanced robot, Jane. But along the way, David discovers shocking truths about the robots, his client, and the world he lives in at large.

But in its imitation, Zone 414 is able to create something truly unique — a sort of greatest hits of the sci-fi genre, borrowing left and right from different works and classics. Whether or not these story devices are used in an original way doesn’t really matter. It’s really all about the nostalgia for the old-fashioned sci-fi detective story.

The world of Zone 414 is a familiar one, but Guy Pearce’s commitment to his role and the mid-to-low budget gives the film even more of that classic 80s vibe. Pearce even tries to do a Boston-ish or New York-ish accent that brings to mind M. Night Shyamalan’s attempt to predict what future accents will sound like in After Earth.

Of course, with any retro sci-fi movie love letter, there are parts that don’t age well. And with any story with humanoid robots, the issue of consent and personhood inevitably rears its ugly head. But hiding these aspects would be sanitizing the past, and by showing them so graphically, Zone 414 (intentionally or not) starts a conversation in how misogyny is excused when it’s seen through a sci-fi lens.

The world of science fiction, despite being so future-focused, is weirdly obsessed with its predecessors. Zone 414 is a cautionary tale about what happens when that goes too far, and for that reason, it’s well worth watching.

Zone 414 is now streaming on Netflix.