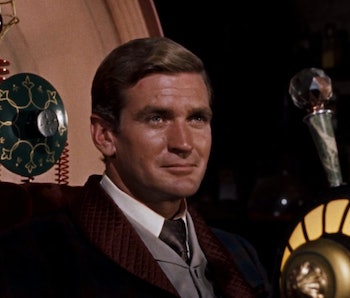 Time travel movies have been a staple of cinema for decades. The popular sci-fi subgenre has inspired blockbuster filmmakers like Robert Zemeckis and Christopher Nolan, as well as rom-com auteurs like Richard Curtis, to produce their own takes on what it might look like to travel through time. It’s a concept that invites invention and ingenuity, which is likely why so few directors dare to go back to where the subgenre truly began.

That’s where The Time Machine comes in. The Rod Taylor-led 1960 flick is an adaptation of H.G. Wells’ 1895 novella that’s credited with popularizing the time travel genre as we know it today. As a result, The Time Machine is an unabashedly retro film, one that combines Wells’ late 19th century sensibilities with the style and aesthetic of late 1950s Hollywood filmmaking.

As its title suggests, The Time Machine is about Rod Taylor’s H. George Wells (get it?) and the contraption he builds to travel backward and forward through time. Disillusioned by the brutality and grime of 1899 London, the film follows Wells as he uses his machine to go into the future in search of a time when humanity has done away with conflict and savagery in favor of peace and prosperity. What he discovers, of course, is the exact opposite.

Traveling hundreds of thousands of years into the future, Wells arrives at a time where humanity has been split into two factions: the peaceful but naïve Eloi, who live above the Earth’s surface, and the mutated Morlocks, who live underground and come out only at night. Searching for answers about both groups, Wells gradually learns of the apocalyptic struggle that led to the creation of the futuristic society he’s found himself in, as well as the horrifying truth that no one around him dares say out loud.

What follows is a conflict between Wells and the Morlocks that’s both legitimately horrific and occasionally absurd. But the true appeal of The Time Machine doesn’t have anything to do with its plot, characters, or central dramatic conflict, but with the way in which director George Pal brings Wells’ original sci-fi vision to life.

If there’s any reason to watch The Time Machine, it’s for the film’s enjoyably retro time travel sequences. Wells’ first journey into the future, for instance, serves as a centerpiece for the film, beginning about 25 minutes into its runtime and concluding 20 minutes later. Rod Taylor narrates the sequence, which uses astonishing, practical time-lapse effects to visually illustrate Wells’ journey forward into time.

Constantly cutting back and forth from Taylor’s face to the environment around him, Pal visualizes the passage of time by showing, among other things, a candlestick rapidly melting down to its holder, flowers quickly blooming and closing, and the sun arcing across the sky like a shooting star. Pal even has Taylor pay attention to the storefront window across the street from Wells’ home, all so that he can show a mannequin’s outfits repeatedly change until its 1890s dress becomes a 1960s bathing suit.

The sequence is stunningly inventive and still capable of inspiring awe over 60 years after The Time Machine was released, and that’s largely thanks to the enduring quality of the practical effects that were used to bring it to life. The same can be said, however, for all of The Time Machine.

The film isn’t just an adaptation of one of the most influential stories of all time, but also a time capsule in and of itself; one that keeps the spirit of 1950s Hollywood alive in all of its fantastic, hokey glory.

The Time Machine is streaming now on HBO Max.

More like this
Culture
15 hours ago
Sci-fi legend René Laloux’s final movie is his most opaque — and maybe his best
By Jake Kleinman
Culture
Jan. 16, 2023
Nearly 20 years later, a Will Smith sci-fi movie feels like a warning
By Eric Francisco
Culture
Jan. 25, 2023
David Cronenberg made the best Stephen King adaptation you probably haven’t seen
By Jon O'Brien
LEARN SOMETHING NEW EVERY DAY.
Related Tags
Share: