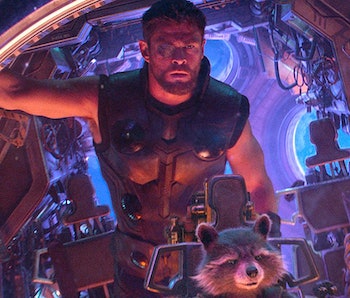 We are Groot. The beloved anthropomorphic tree has been through a full evolutionary cycle since his humble beginnings in Guardians of the Galaxy. These changes saw him go from an adult to a baby before becoming an angsty adolescent in Avengers: Infinity War. A new leak suggests that Groot will be taking the final step in his growth cycle in Thor: Love and Thunder.

In March, Vin Diesel was asked about the various stages of Groot’s life. Which part of the growth cycle would come next? The actor told USA Today that a very different (and unexpected) version of Groot was indeed on the way, and that fans were in for a real treat when the creature next showed up onscreen.

"The Groot that we're going to is Alpha Groot. You're gonna lose your mind when you see Alpha Groot."

The "Alpha Groot" name was debunked by James Gunn, though it’s now possible that Diesel was actually talking about his role in Thor: Love and Thunder instead of Guardians of the Galaxy Vol. 3. A few weeks ago, a leak indicated that Diesel had arrived in Australia to film the fourth Thor movie. Considering that the news came shortly after reports that Chris Pratt had joined the cast, it seemed clear the Guardians were headed for New Asgard.

The only hiccup here is that Groot is a CGI character and Diesel only provides the voice — not the motion capture work. Why would he need to go all the way to Australia to do voice work?

Per Marvel leaker Daniel Richtman, Diesel will be doing the motion capture performance in addition to lending his voice for Groot in Love and Thunder. In hindsight, this information was already hinted at by Diesel himself, and it seems that the leak is merely putting the puzzle pieces together now that there are a few more details to parse. If true, this would be the first time that Diesel would be embodying Groot’s physicality and if he is indeed an "alpha," then it makes sense to have the actor be the stand-in for his character.

What does this mean for Groot in Love and Thunder?

It’s unclear how far into the future the film takes place, but it’s possible that several more years have passed since Endgame and Groot is more enhanced than ever. In the comics, Groot can reach a maximum height of 23 feet and 8,000 pounds in weight. That’s pretty massive (not surprising since he is a tree) and worthy of the name Alpha Groot.

There’s a chance that this version of Groot is big enough to finally join the battle in a meaningful way. Rather than be protected, he will be the protector. Conversely, Alpha Groot could very well be an alternate, monstrous version of the character. In his earliest form in the comics, Groot was actually a power-hungry creature who came to Earth seeking humans for experimentation (it’s pretty dark).

An alternate earth version of Groot was once a part of Thor Corps, an organization comprised of Mjolnir-wielding beings tasked with protecting the galaxy. Having a Thor-like Groot showing up to fight alongside the God of Thunder would be quite an impressive feat.

Considering that the Marvel Cinematic Universe will be exploring different timelines and dimensions other upcoming movies and shows, Love and Thunder may be capitalizing on this very concept with Alpha Groot. While there aren’t very many details about the film’s plot, we can surmise that Alpha Groot will be a force to reckon with.